The era of bipartisanship on climate is dead. Here’s what comes next. 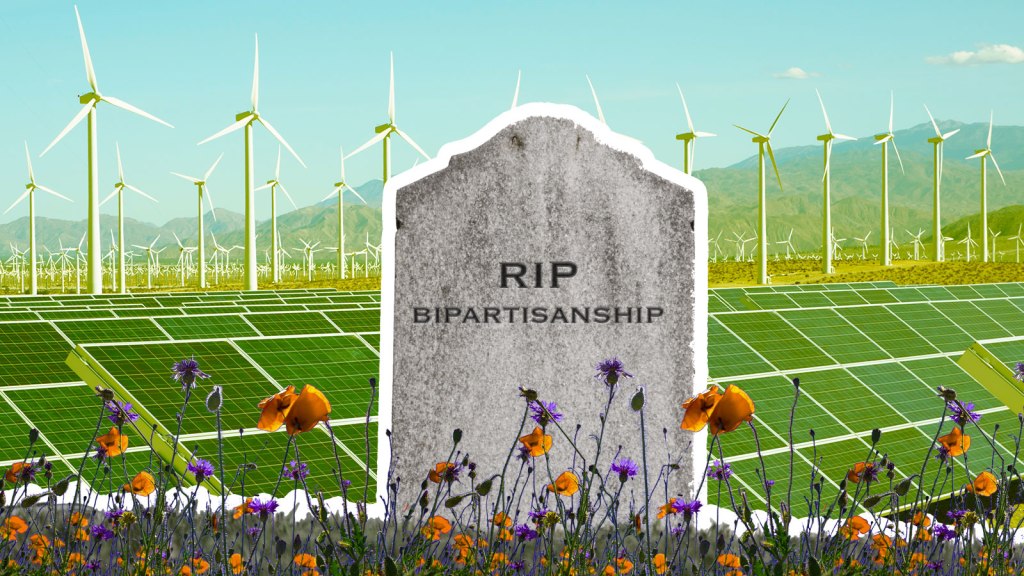 The era of bipartisanship on climate is dead. Here’s what comes next.

As the results of the midterms continue to trickle in, one thing is clear: Bipartisan climate action in the U.S. is over.

For decades, there’s been the dream that one day, with the right coalition, the U.S. would pass a nationwide climate policy that could gently steer the country toward a clean energy future. The moderate coalition that might have supported such an effort is now in shambles: Pro-climate Republicans lost big last night. It’s an open question if there are even any Republicans left in Congress that would support bipartisan market-based climate policies (if there ever were).

And on those market-based policies: Climate ballot initiatives also lost big. The biggest loss of the night, facing millions of dollars of opposition by the fossil fuel industry, was Initiative 1631, Washington’s attempt to be the first state to tax carbon. In total, clean energy ballot measures were up against more than $100 million in opposition nationwide. A majority of them failed. Turns out, you can’t beat the wealthiest industry in all of human history at their own game.

During the time the U.S. has waited for bipartisan, market-based policies to manifest, the climate stakes have gone up. A hypothetical carbon tax that would be able to pass Congress probably wouldn’t do enough anyway. After two decades of trying, there needs to be a realization that it’s likely too late for a Republican-friendly “nudge” policy, like a carbon tax or cap-and-trade.

So, the current strategy isn’t working. And with warnings from climate scientists blaring, it’s time for something different. If there’s one thing this election provides, it’s some much-needed moral clarity.

Writing for the New Republic, Emily Atkin lays blame at the feet of a Democratic Party that failed to elevate climate change to a top-tier issue during the midterms. More than gun violence, more than racism, more than affordable health care, more than immigration — voters rate climate change as the  issue that most separates the parties. Still, the Democratic agenda for the next Congress barely mentions climate change, continuing a worrying trend.

On election night, Pelosi said the Democrats would “strive for bipartisanship” with their newly achieved majority in the House of Representatives. In a contentious morning-after press conference Wednesday morning, President Trump namechecked environmental issues as a possible avenue for compromise. If Pelosi tries to craft the party’s climate policy around what Trump sees as permissible, God help us.

If there ever was a time, now is the time to be bold. Incremental action, at this point in history, is equivalent to climate denial. The U.S. is a generation behind the climate policies of the rest of the world. Carbon taxes are more suited to a scenario in which we have more time. But time is short now, there’s no more time left to “ramp up” a lukewarm American policy. Good climate policy is driven by what’s necessary, not what’s politically possible.

Here’s what I think happens next in American climate action:

Instead of continuing to argue for a carbon tax or cap-and-trade, Democrats should instead rally behind the Green New Deal set of ideas.

We need a comprehensive retooling of the American economy for the 21st century. A jobs guarantee, a goal of 100 percent carbon-free energy as soon as possible, a commitment to a society that respects our bedrock values of equality and justice. All those needs would exist even without our present climate challenge. Packaging them together under the urgency of climate change is something that will rally people, send the appropriate signals of the scale of the problem, and reward voters with a better society at the end of the day, rather than penalizing them for continuing to use old forms of energy.

If that’s the scale of change that’s needed, then that has to be the vision. We just need the right visionaries.

Thankfully, a new generation of climate champions were elected last night. In the five toss-up House races where voters were most concerned about climate change, all went for the more pro-climate candidate. Some leaders in this new generation are bringing a courageous message on climate to which the Democratic party should listen. In her victory speech after becoming the youngest woman ever elected to Congress, Alexandria Ocasio-Cortez (New York 14th District) provided an inspiring message: “We can do better and we can be better because a better world is possible.”

What does a better world look like for climate campaigners? It means not wasting any more time convincing officials who are clearly beholden to fossil fuel money to “believe” in climate change. It means returning to the reasons that climate change matters in the first place: At its core, climate change is an assault to the rights to life, liberty, and the pursuit of happiness that are at the core of what it means to be an American.

A good climate platform will talk about climate as the basis for all other issues: health care, jobs and the economy, immigration, and decency to our fellow humans. It will start with the major climate and clean energy gains by cities and states in the Trump era, and build them out into a national strategy in line with the demands placed on us by the emerging findings of climate scientists.

A good climate platform will rally around those on the front lines of the climate challenge — young people, black, Latinx, and indigenous people, and women — and follow their leads to help craft a set of policies that reflect what people need and care about.

A good climate platform means truly, utterly, laying it all out. A good climate policy isn’t just bipartisan; it rises above politics. The Intergovernmental Panel on Climate Change says this decade is our last chance. Leaders, it’s time you believed them.