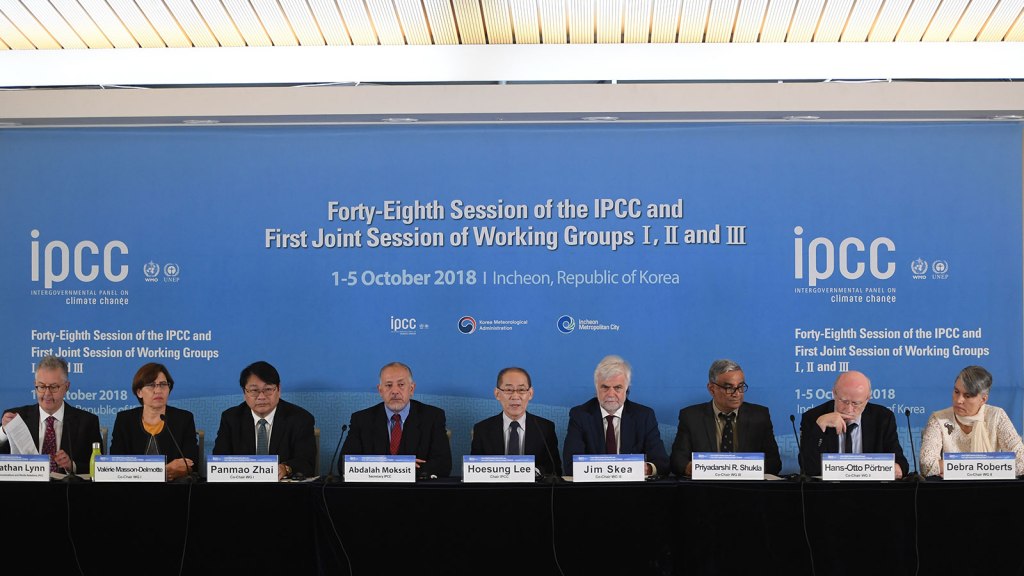 Absent heroic efforts, the world has locked in dangerous climate change. That’s according to a much-anticipated report released on Monday in South Korea by the Intergovernmental Panel on Climate Change, a U.N.-sponsored collection of the world’s top scientists.

That stark, blunt assessment comes after years of deliberation at the request of the world’s most vulnerable nations to assemble pathways that could limit global warming to no more than 1.5 degrees C, now believed to be the upper limit that would preserve the stability of the world’s interconnected ecological and societal systems.

Some key conclusions: The world has already warmed by about 1 degree C and without a global coordinated effort, the world will reach 1.5 degrees in as little as 12 years. “Several hundred million” lives are at stake, according to the IPCC, and the actions that are required to ensure a just transition to a fossil-fuel free world have significant overlap with the actions that would be needed to reduce global poverty.

Existential risks greatly escalate if the world lets the 1.5 degree Celsius goal slip to 2 degrees, much less the 3.4 degrees we’re currently on pace for — the difference between The Hunger Games and Mad Max, as one climate reporter put it. Still, the benefit to society of completing this transition (roughly equal to the size of the entire global economy, about $60 trillion) greatly outweighs the costs of the massive scale of action the report describes.

In short, nothing like what is happening — and what needs to happen — has ever occurred in history.

“If action is not taken, it will take the planet into an unprecedented climate future if we compare to what has happen in all of human evolutionary history. Climate change is shaping the future of our civilization,” German climate scientist Hans-Otto Pörtner, one of the report’s lead authors, said in a response to a question from Grist. “This report is a milestone in conveying that message to human society.”

As daunting as all this seems, the alternative — ignoring this report, continuing about our lives as if it didn’t happen — is madness. This isn’t just a science report. This is a few hundred of the world’s best scientists screaming (in terrifyingly politely worded specificity) for the world to step up. By every available measure, this is something we simply must do.

Some of the initial coverage frames the IPCC’s stark conclusions in the too-familiar phrase of a time limit for action. “The world has just over a decade to get climate change under control” reads the Washington Post’s headline. That’s absolutely the wrong way to frame this. We only have a decade left to finish our initial coordinated retooling of society to tackle this challenge. The scientists were quite clear about this. By 2030, we’ll need to have already cut global emissions in half (45 percent below 2010 levels, according to the report), which (again, according to the IPCC) would require “rapid and far-reaching transitions” in “all aspects of society.”

Imagining a world that sets aside climate denial and gets to work is perhaps too much for some to consider, but there simply is no choice left. We have already waited too long.

And the IPCC gives cause for courage here: There is no time left to wait for the perfect solution or the perfect moment to enact a grand, top-down strategy. “All options need to be exercised,” said Scottish climate scientist Jim Skea, one of the report’s lead authors, at the report’s press conference. “We can make choices about how much of each option we use … but the idea you can leave anything out is impossible.” Carbon taxes alone aren’t enough, for example. They’d need to be combined with a suite of regulations and behavioral changes in every industry in every country.

In the words of the report itself, although “there is no documented historic precedent” for the scale of changes that would be necessary, the world has briefly achieved such rapid change at regional levels during previous times of great crisis — like, during World War II or in the midst of the energy crisis of the 1970s. In this new era of climate consequences, quite simply, every idea matters; every individual action has meaning.

In short, we need to remake society — now. Absent this, the new report says “transformational adaptation” would be necessary — with communities and whole countries reinventing themselves in order to survive.

Diana Liverman, a climate scientist at the University of Arizona and another author of the report, told Grist that the process brought her to tears. “I am overwhelmed by challenge we face. I had a good cry on plane home from exhaustion and thinking about implications of report.” Liverman also authored the “hothouse Earth” paper that drew similar conclusions earlier this year — namely that a dead world is not our destiny.

If nothing else, my hope is that this report will help to take the lid off of climate (read: civilization) advocates calling for radical changes to the status quo. They now have the full weight of the world’s top scientists behind them.