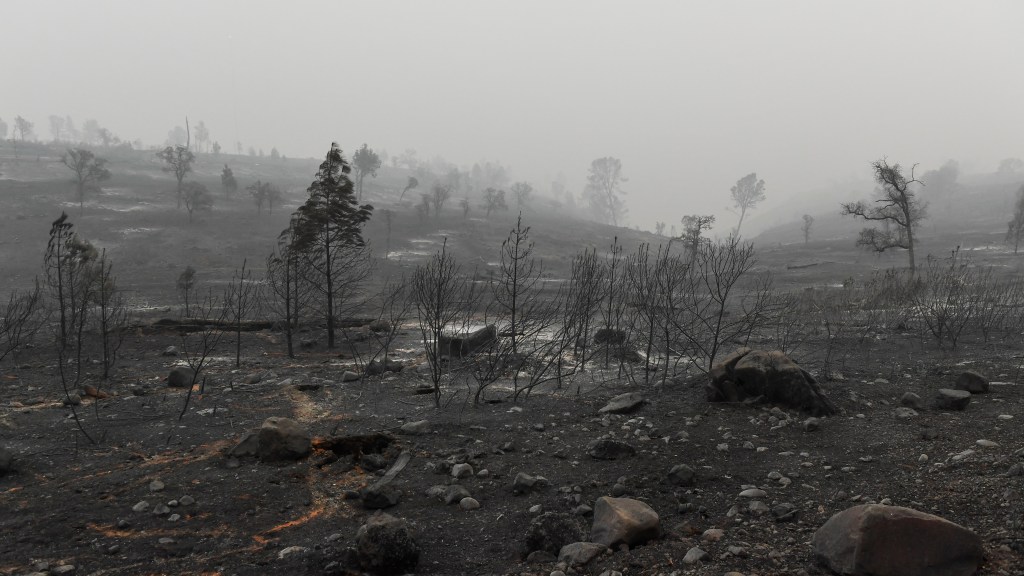 Scene of destruction after the Camp Fire in Paradise, California. Ricky Carioti / The Washington Post via Getty Images
Camp Fire

Northern California faces a new threat in the aftermath of the disastrous Camp Fire: Weather forecasters are growing more confident that downpours, which could bring flash floods and mudslides, are headed for the fragile, scorched terrain.

On Monday night, the National Weather Service issued flash-flood watches for recent burn areas, in preparation for a series of heavy rainfall events arriving between Wednesday and Friday.

The forecast prompted an escalation of ongoing search and recovery efforts in Paradise, with fears that the rains could wash away the remains of fire victims, reducing the chances of families of the hundreds of residents still listed as missing finding closure.

Kory Honea, the sheriff of Butte County, told the Associated Press that the looming rains means that it’s within the “realm of possibility” that officials might never be able to determine the fire’s exact death toll.

As of Tuesday afternoon, at least 79 people are known to have died, 699 are still unaccounted for, and more than 40,000 displaced. The Camp Fire is already one of the deadliest U.S. disasters of any kind in the 21st century. It is the deadliest U.S. fire in 100 years, and the sixth-deadliest worldwide in that same timespan, according to numbers compiled by meteorologist Jeff Masters. The 17,148 buildings destroyed in and around the town of Paradise are nearly equal to all those lost in each of the other top-10 most destructive fires in California history, combined.

Current forecasts call for as much as six inches of rain near Paradise — about as much as the region gets in an average November — arriving in the span of just a few days. That kind of a deluge would not only frustrate recovery efforts, but it could also spawn mudslides and flash floods by turning the newly barren soil into a roiling, debris-filled torrent. That the still-burning fire that started this whole mess could be extinguished in the process is almost an afterthought.

Survivors’ stories are still emerging two weeks after a wall of flames burned through Paradise in mere hours. While the cause of the fire is yet to be officially determined, it’s nearly certain that climate change played a crucial role in how quickly it grew and spread.

It’s worth noting that climate change is likely playing a role in intensifying heavy rainfall in California, too. More rain can fall in a shorter period of time in a warmer atmosphere that’s becoming more efficient at evaporation. In California, most heavy rainstorms, including those in the forecast this week, come via such atmospheric rivers — tropical conveyor belts of moisture streaming directly ashore — and these are growing wider and more intense as the planet heats up.

The fact that two of the extremes of climate change — drier and hotter droughts, and wetter and wider floods — are manifesting as part of the same disaster is a sign of the urgency of the crisis. The Camp Fire is the latest example of the compound, complex tragedy of climate change.