Nathaniel Rich published his 30,000-word account of the years between 1979 and 1989 — the decade humanity missed its chance to fix climate change — in the New York Times Magazine last August. The response to the piece was so staggering that Rich put aside his other projects and started turning it into a book the very next week. Losing Earth: A Recent History is out on the shelves April 9, just eight months after the magazine version hit newsstands.

Our near-constant companion throughout the whole sordid tale is an environmental lobbyist by the name of Rafe Pomerance. In 1979, when the story begins, Pomerance happened upon a report warning that continued use of fossil fuels would cause “significant and damaging” changes to the planet’s atmosphere in the span of a few decades. Alarmed, Pomerance, with the aid of a geophysicist named Gordon MacDonald, decided to try to bring the issue to the attention of the U.S. government.

At first, serious progress appeared to be underway. The Carter administration commissioned a report to ascertain whether the issue was really as dire as some scientists were saying. (It was.) But when a team of scientists, policy experts, and government officials convened at a hotel in Florida to craft a framework for addressing the problem, they couldn’t even agree on what the opening paragraph of their statement should say. Thus began an excruciating decade of indecision, delay, and obstruction. 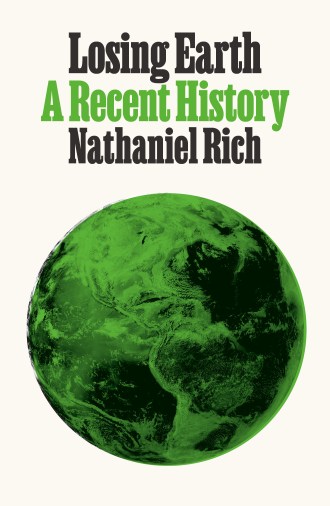 If you finished the marathon task of reading the original magazine article, you’ll find the plotline more or less familiar, though there are some new chapters. And this time around, Rich addresses something many readers, including this one, were left wondering: What do we make of this history?

“We can realize that all this talk about the fate of Earth has nothing to do with the planet’s tolerance for higher temperatures and everything to do with our species’ tolerance for self-delusion,” he writes in the afterword. “And we can understand that when we speak about things like fuel efficiency standards or gasoline taxes or methane flaring, we are speaking about nothing less than all we love and all we are.”

Grist caught up with Rich to talk about his new book and what we can make of the agonizing history he unearthed. Our conversation has been condensed and edited for clarity.

Q.Did you plan to turn your article into a book?

A.As soon as the piece was published, I realized there were some very large questions that arose from the history. I felt some obligation to try to answer those questions more explicitly than I was able to do in the article. I wrote a new afterword that’s essentially a stand-alone essay. I also wanted to go into a little more depth and bring the story up to date from 1989 to the present. Despite the length of the magazine piece, there was actually a lot I had to leave out. And so I was excited for the opportunity to publish a definitive version of the story that I think is fuller, more comprehensive, and more complete as a work of writing.

Q.I’m curious about some of the criticism your article received. Robinson Meyer of the Atlantic wrote that you let “fossil-fuel interests off the hook entirely,” and Naomi Klein argued that you overlooked the role capitalism played in dooming us all. How did you respond to that?

A.I was very surprised at some of those criticisms. As you said, there was this accusation, and usually it was expressed very viciously, that I had downplayed the oil and gas industry’s role in blocking climate policy during that decade. At first I was worried. I thought maybe — in my two-year survey and my interviews with like 100 people — maybe I did miss something.

The [oil and gas] industry wasn’t helping matters, as I write about in detail. Of course, they were aware of the science, just like the government, just like anybody who was following the issue, and made little effort to publicize it or anything else. They made no efforts to pass laws to limit emissions — that would be sort of a ridiculous expectation.

No one is disputing what happened since 1988 and ’89, but the suggestion was that there was a coordinated effort to stop climate policy earlier than that, and nobody in their attacks on the piece was able to come up with a single example.

Q.Why did you choose to tell the story this way, through the lens of a single decade in American history?

A.I felt that the story from 1989 to the present has been extraordinarily well told, and exhaustively told. And I didn’t feel like I had much to add to the story of industry involvement, the corruption of politicians, the corruption of scientists, the Republican Party’s embrace of, first, disinformation propaganda fed to it by oil and gas industry, and then the metastasizing of that into the full-fledged fantasy world of denialism.

What I felt was not understood very well, including by me when I first started researching it, was how we got to that point: the pre-history of our current paralysis. Paralysis not only in the political process but in some sense the dialogue, the public conversation about the subject. It’s been relatively unchanged since the 1990s. So there was this opportunity to tell the story of exactly a decade, from the establishment of scientific consensus about the nature of the problem and the birth of this movement to try to bring about a solution. That was the story that I feel like has been forgotten, including by a lot of people who are on the front lines of the climate change conversation.

A lot of activists and advocates are still under the impression that the problem started with James Hansen speaking before Congress in 1988. Even New York Representative Alexandria Ocasio-Cortez the other day was giving an extraordinarily passionate, eloquent speech on the floor of the House about how we need to take action on climate, and she said that the government has known about this since 1989. I don’t mean to single her out, but even people on the leading edge of this are still essentially taking for granted the industry talking point that this is a new problem, something that has just come to light as recently as the 1980s. Of course, the government knew about it in the 1950s. And scientists knew about it decades before that. The amount of public amnesia around the issue is staggering.

Q.A few times throughout the decade you focus on in your book, the United States was on the precipice of real climate action. It never materialized. Now, it feels like parts of the public are mobilizing toward action again. Could this time be different?

A.What’s changed really in recent months in the public conversation is that the young leaders are now bringing new momentum to the issue. They’re saying things like, “our lives are at stake, you people in positions of power are robbing our future from us.” They’re also making very emphatic connections in the way they talk about how the climate crisis is inextricable from almost every issue of social injustice in the U.S. and globally. When you hear Ocasio-Cortez or Greta Thunberg talk about it, they’re making a moral argument that I think is frankly stronger and more profound, and ultimately more politically effective, than making only the logical argument. There’s a moral tenor to the way they’re talking about it that I don’t think was present and couldn’t have been present in the 1980s.

It’s a transformation of the dialogue that I think was inevitable, but it’s heartening to see it happening now. It’s extremely powerful and it will only become more so. I also think it’s a more honest way of speaking about the problem, as something that is a threat to our very humanity and the way we view ourselves. That’s why I went back to this period [between 1979 and 1989] because I think it’s a way of writing about this story in human terms, before the poisoning of the dialogue.