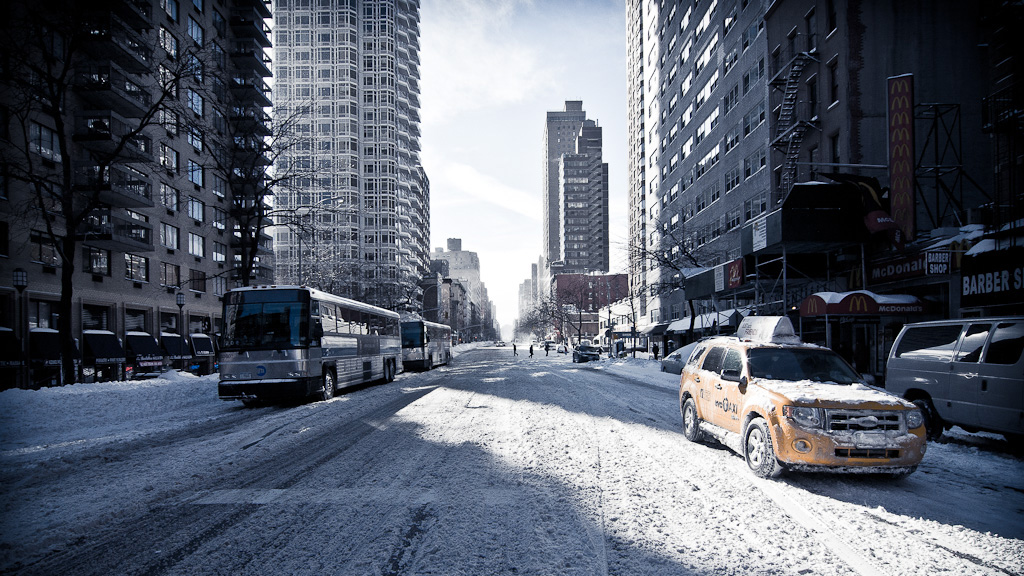 It’s no secret that Americans love salt. But our uses for it extend well beyond the kitchen: It turns out we dump so much of the stuff on our roads that a lot of it ends up in our freshwater rivers and streams. Thanks again polar vortex.

See, sodium chloride’s not only our favorite rock to eat, it’s still the best way to deal with slick sidewalks and streets in the face of the dreaded wintry mix. Salt is cheaper and just works better at unsealing the bond between road and pavement than alternatives like calcium chloride, magnesium chloride, or potassium chloride. After getting pounded with storm after storm this winter, municipalities in the Northeast and Midwest had little freak-outs when they thought they wouldn’t be getting enough of the stuff (you know things are getting desperate when towns turn to cheese brine, beet juice, or, heaven forfend, pickle juice for alternatives, not to mention when 80 tons of salt crystals mysteriously “disappear”).

But the subtext behind the salt shortage is that we’ve used more of it this year than we normally do. And when our total last year came to 17 million tons — 109 pounds per person in the U.S. — well, that’s more than just a dash.

And what goes on to our roads must end up … where? That’s a question that no one thought to ask until a few years ago. The answer’s not pretty: In 2009, one group of scientists reported that 70 percent of the road salt applied in the Twin Cities gets retained in their watershed, leaving freshwater critters in increasingly saline situations. And similar studies conducted in New Hampshire, Massachusetts, and Indiana show the problem to be relatively widespread.

Now, there’s evidence of dozens of “chloride impaired” bodies of water throughout the U.S., in which chloride levels are at or above the EPA fit-for-drinking standard of 250 milligrams per liter. While there are also other sources of chloride, Eric Williams, of the New Hampshire Department of Environmental Services, says road salt is the main culprit behind his state’s list of 46 too-salty water bodies.

And while these are the metrics used for what’s best for humans, it takes less for some freshwater species to start to feel overbrined. Williams says that even chloride concentrations kept at 230 mg/L — just a teaspoon of salt for five gallons of water — for four days can be deadly to aquatic life.

The excess salt messes with certain sensitive fishes and amphibians’ osmotic balance. If you’ll recall your high school chemistry (no, not that kind): When some aquatic animals experience more salt outside their bodies than inside, their cells expel water to try to get the equation right — but it generally results in them shriveling up and dying. Hardly sounds like the way to go.

“They’re not used to living in that kind of water, and so it’s toxic,” Williams says. “Like any other kind of toxic chemical might be to an animal or tree or human, chloride can be toxic if it’s in too high of a concentration.”

Gloomy as that may be, the worst is yet to come, says Stuart Findlay, of the Cary Institute of Ecosystem Studies. “We’re seeing almost the beginning of the problem, not the end,” he says. “[In New Hampshire] salt concentrations are increasing even though there aren’t new roads and we’re not applying more salt to the roads we already have.”

Even cities with best intentions find cutting salt from their diet easier said than done. Environmentally conscious Seattle tried, and you can see how halting the salt worked for them:

That’s why there’s a Salt Guru.

When vehicular mayhem hangs in the balance, most city officials won’t abandon salt entirely — which makes it all the more important to come up with ways to reduce road salt inputs through more efficient application of it to our roads.

Minnesota, the frosty land of 10,000 lakes, is one of the states taking the lead. Since 2006, the Minnesota Pollution Control Agency has trained 4,000 salt applicators in how to get the most out of their spread. By using techniques such as pre-wetting, which helps the salt stick to the road, or just by being more intentional in where and how much salt is spread, MPCA’s Andrew Roncha says “those that are trained easily can reduce their salt usage by 50 percent.”

If more states can implement the same straightforward fixes as Minnesota, we could be looking at a win-win-win: less chloride in our streams, municipal cost savings, and roads that are just as safe. And the next time precious salt cargo gets held up on its way to a frozen state, it might not hurt so much (here’s lookin’ at you, Jersey).