Corporations make promises all the time, but how much are those promises worth? It’s nearly impossible to distinguish between corporate assurances of brilliant superiority and plain old BS … until something goes wrong. Crisis forces action, and action allows us to see what’s real. To put flowery promises to the test, we need a crash test to see which ones shatter.

That’s what we got when the palm oil industry threw the Malaysian agribusiness giant, IOI Group, out of its self-governing organization, the Roundtable on Sustainable Palm Oil. The Roundtable suspended IOI for failing to address complaints it has been profiting off deforestation and human-rights violations. This means that IOI can no longer sell Roundtable-certified palm oil. Most importantly, the move forces everyone else in the palm-oil business to show their cards. Now that industry leaders have cast out one of their peers, will other companies fulfill their promises and cancel their contracts with IOI? 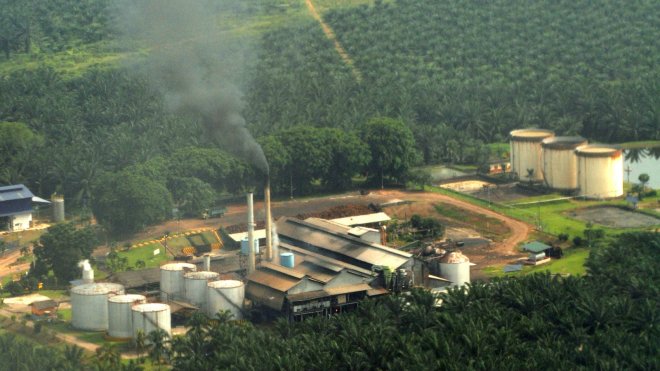 The stakes couldn’t be higher. Our hunger for palm oil has driven corporations to bulldoze and burn some of the oldest forests in Southeast Asia, Africa, and South America. In Malaysia and Indonesia, many of these forests stand on deep peat — and peat is another way of saying carbon, in the form of thousands of years worth of sodden wood and leaves. In recent years, the fires consuming these forests and the peat beneath them have swathed the region in smoke nearly year-round. The carbon emissions are eye-popping, the habitat destruction is heartbreaking, and the smoke is lung-crushing.

You’ll almost certainly find palm oil in your bathroom and kitchen. It’s in Ben and Jerry’s ice cream, Garnier Fructis conditioner, Colgate toothpaste, Ritz crackers, and Jif peanut butter. But don’t scratch those products off your shopping list just yet, because it’s also in just about everything else. Palm oil is so ubiquitous that most environmental campaigners gave up trying to boycott the stuff. Instead, activists shifted tactics, pushing the palm-oil industry to stop cutting down forests, burning peat, exploiting — or enslaving — people. As unlikely as it sounds, every major palm-oil merchant has promised to eliminate deforestation, peat, and exploitation from their supply chains. These pledges are dramatic, but are they just words? IOI’s suspension is the test case that will give us an answer. 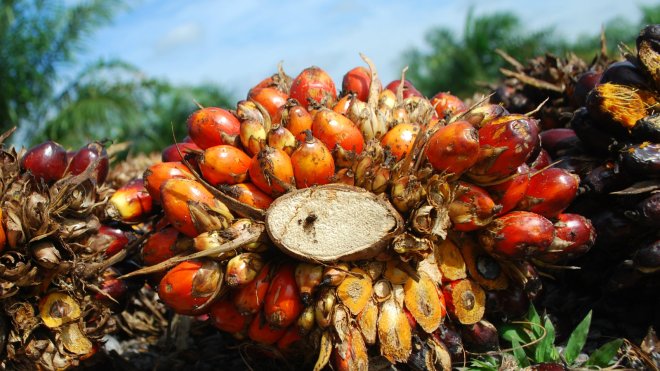 There’s another crucial wrinkle you need to understand. There are two types of sustainability commitments in play here, a low bar and a high bar. The Roundtable on Sustainable Palm Oil represents the low bar. It’s almost impossible for a company like IOI to get into trouble with the Roundtable. It’s a self-regulating organization that has rarely imposed more than the meekest of standards.

The corporate pledges — no deforestation, no peat, no exploitation — represent the high bar. Companies made those promises independently, and they go far beyond Roundtable standards. The point here is that the charges against IOI come not from some hotheaded activist, but a jury of its corporate peers, delivered after six years of deliberation. So, it’s hard for the CEO of a company that has a high-bar pledge to justify buying from a company that can’t clear the Roundtable’s low bar.

So how are companies responding? The big palm oil buyers that made those no-deforestation commitments — like Wilmar, Unilever, and Nestle — have said they are, indeed, canceling contracts with IOI. A couple of other companies, like Bunge and General Mills, have said they would continue doing business with IOI in some form. Many companies — no huge surprise here — are keeping mum. Some of those quiet corporations really should be talking: Avon and Krispy Kreme, for instance, both buy a lot of palm oil and made no-deforestation pledges. If these pledges mean anything, the companies need to be transparent. “Overall, we largely see this playing out as a success story that the vast majority of companies are taking their no-deforestation commitments seriously,” said Deborah Lapidus, campaign director at the Center for International Policy.

This chart shows where a few of these companies stand. (Update: PepsiCo does not source any palm oil from IOI). Click here for a complete list. 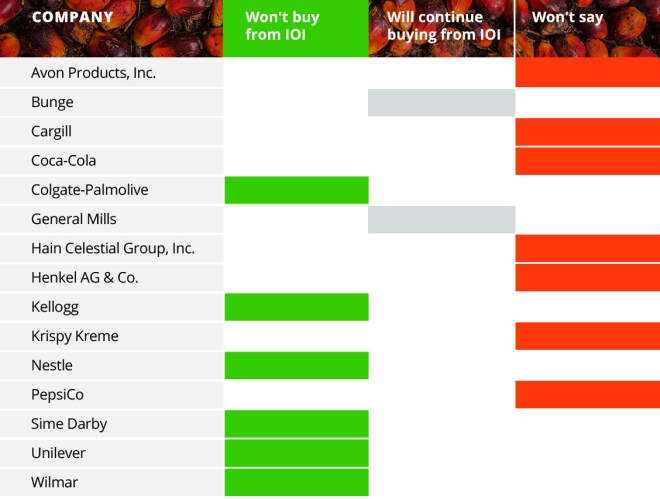 To be sure, a simple chart like this hides shades of grey. Companies are dropping IOI like a hot coal now that the Roundtable has suspended it, but what were they doing over the past six years as the evidence piled up? This crisis is revealing the way some companies took action behind the scenes, without waiting for the Roundtable. For instance, Nestle said it had been buying from IOI because — as a customer — it had better standing to demand change. Every year that change didn’t materialize, Nestle said in an email, it responded by cutting the volume of palm oil it bought from IOI.

The companies that have said they will be doing some business with IOI deserve more benefit of the doubt than those that have stayed silent. Announcing that it’s going to take time to move away from IOI, as General Mills did, requires a commitment to openness and honesty. Far easier to stay mum altogether. Better still to announce a hard timeline, of course. 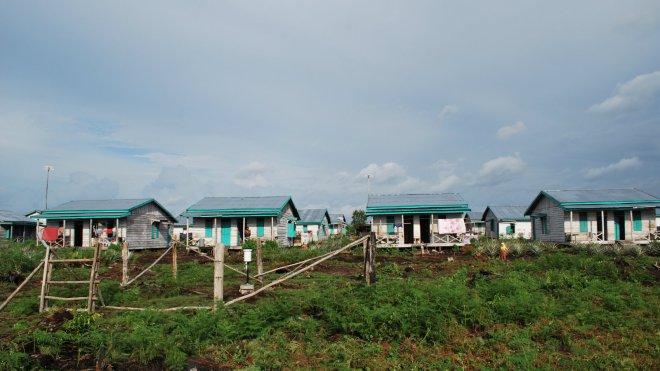 So, does it matter that a bunch of companies are dropping IOI for other palm-oil suppliers? Financial analysis from Morgan Stanley and Chain Reaction Research suggest that this suspension will squeeze IOI’s profits. The ratings agency Moody’s has said that it’s now riskier to lend money to IOI. And the most compelling evidence that the palm oil industry’s no-deforestation pledges are making a difference comes from IOI itself. It recently sued the Roundtable, saying its suspension had caused “caused significant disruption” as well as “commercial and reputational losses.”

It’s fascinating to watch corporations putting pressure on other corporations. This is all happening in the marketplace, rather than in the halls of government. I suspect that governments will need to get involved eventually to protect forests and the people living in palm-oil country, but regardless, it’s encouraging to see corporations stand behind their promises. Even the monocled, cigar-chomping caricature of a capitalist must, in the end, give customers what they want. Maybe capitalism really can be used for the good of the environment.