The amount of new coal power being built around the world fell by nearly two-thirds last year, prompting campaigners to claim the polluting fossil fuel was in free fall.

The dramatic decline in new coal-fired units was overwhelmingly due to policy shifts in China and India and subsequent declining investment prospects, according to a report by Greenpeace, the U.S.-based Sierra Club, and research network CoalSwarm.

The report said the amount of new capacity starting construction was down 62 percent in 2016 on the year before, and work was frozen at more than a hundred sites in China and India. In January, China’s energy regulator halted work on a further 100 new coal-fired projects, suggesting the trend was not going away. 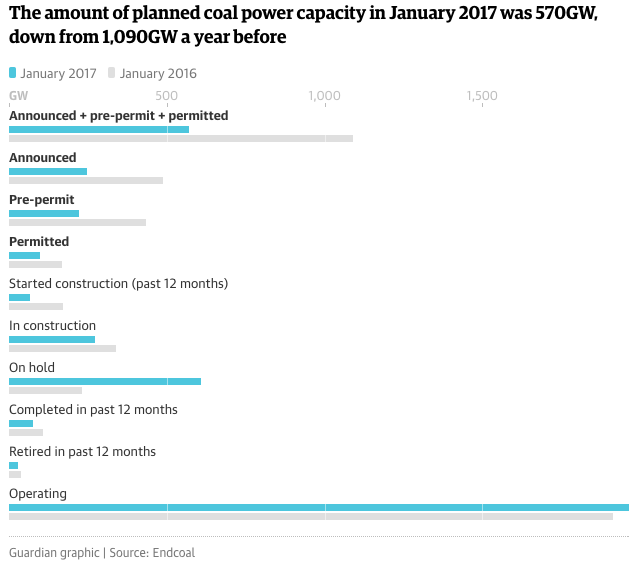 Researchers for the groups said a record amount of coal power station capacity was also retired globally last year, mostly in the U.S. and E.U., including Scotland closing its last one.

One of the reasons for the fall in new plants was that too much capacity had been built in recent years, particularly in China.

Tim Buckley, director of energy finance studies at the IEEFA, a pro-green energy think tank, said the falling demand for coal power in China and India and plans to curtail new power stations shows that the world has overestimated the need for the fossil fuel.

The report, which tracked power stations through publicly available information, company reports, and satellite imagery, said 65 gigawatts of new coal-fired units had started construction between January 2016 and January 2017, down 62 percent on the 170 gigawatts the year before. Most coal power stations are around 1 gigawatt or greater in capacity.

Lauri Myllyvirta, a Beijing-based energy analyst at Greenpeace and author of the report, said the fall in China was largely down to government policy to clean up air pollution and encourage clean energy. That policy shows no sign of stopping — at the weekend, Beijing ordered its last coal-fired power plant to close in a bid to improve the capital’s air quality.

Myllyvirta said that in India the decline was down to slower-than-expected growth in energy demand, and renewable energy projects being installed rapidly.

Paul Massara, the former chief executive of RWE Npower and now head of a green energy company, North Star Solar, said: “The decline in new coal plants in Asian countries is truly dramatic, and shows how a perfect storm of factors are simply making coal a bad investment.” 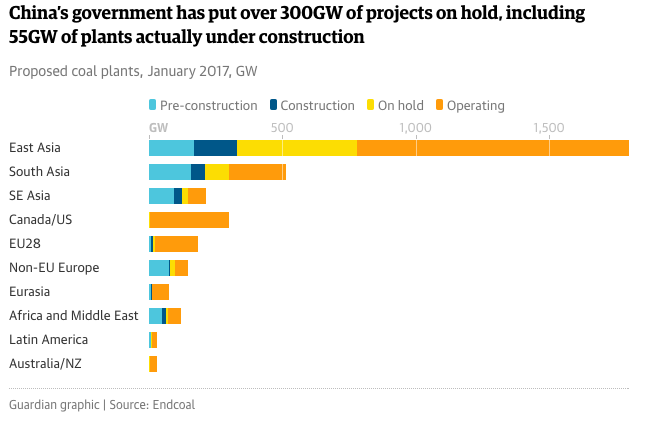 In total, 64 gigawatts of coal capacity was retired last year, mainly in the U.S. and E.U. Despite U.S. President Donald Trump saying on Monday that he is preparing a new executive order to help America’s ailing coal industry, campaigners echoed analysts who have said he is unlikely to be able to significantly stop its decline.

“Markets are demanding clean energy, and no amount of rhetoric from Donald Trump will be able to stop the fall of coal in the U.S. and across the globe,” said Nicole Ghio, senior campaigner at the Sierra Club, a U.S.-based NGO which has managed to force many U.S. coal plants to close over the last decade.

However, the report showed there were still around 570 new coal-fired plants in pre-construction around the world, prompting the industry to reject the notion it was struggling.

Benjamin Sporton, chief executive of the World Coal Association, said: “Yes, China is reducing the number of coal stations, but not because it’s transitioning away from coal; instead, the new dynamics is a signal of a more developed economy. Contrary to the picture being portrayed by certain quarters, China’s climate pledge suggests that coal will continue to be central to its energy solutions, albeit through efficiencies including the use of new coal technologies.”

For India and countries in Southeast Asia, he argued, “excluding coal from the energy mix is not an option — it is essential for economic growth and critical in securing energy access.”