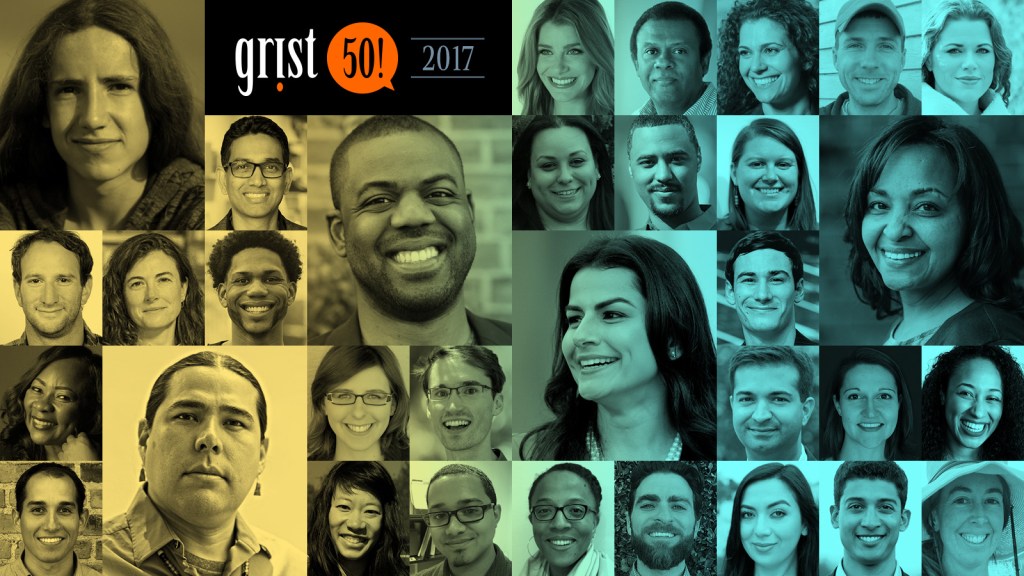 There’s no question we live in unsettling times. But for the past few months, we at Grist have been able to indulge in a very effective form of group therapy, and now at last we can share it with the world.

Since last fall (right around election time, in fact), we’ve been working on our latest edition of the Grist 50 — an annual list of 50 emerging leaders with fresh, forward-thinking solutions to some of the world’s biggest problems.

We’re calling this year’s group “The Fixers,” because even at a time when the world feels pretty broken, they haven’t given up on a planet that doesn’t burn and a future that doesn’t suck.

“The Grist 50 shows that real change doesn’t begin in D.C. This next generation of leaders will create a sustainable, just future.”
Van Jones, activist and commentator

Our list includes people like Donnel Baird, a child of immigrants from Guyana who grew up in a tiny Brooklyn apartment, relying on a cooking stove for heat. Today Baird is the founder and CEO of BlocPower, a company that provides the engineering and financial know-how to retrofit old, unhealthy, energy-wasting buildings (like the one he grew up in), saving the owners money, fighting climate change, and improving public health all at the same time.

When I interviewed Baird for the Grist 50, we couldn’t help but talk about the state of our nation. It was just after the Trump administration’s first attempt to ban travel by immigrants from seven majority-Muslim countries; one of Baird’s partners had missed being caught in the JFK airport dragnet by just a few hours.

“Half of our employees are from American inner cities,” he told me. “The other half are immigrants from countries like China, India, Iran.” There’s no question Trump’s actions have had a personal and professional impact on Baird’s company and the cleantech industry writ large.

Yet alongside the anger and anxiety he felt, Baird remained optimistic, seeing an opportunity for states, communities, and the private sector to step up, take control of the country’s direction, and keep clean energy moving forward. BlocPower, for instance, recently secured a seven-figure infusion of venture capital funds from Silicon Valley investors, Baird said.

Washington might no longer be interested in sustainability, but the rest of the world still sees a smart investment. “That’s going to be very good for us, we think.”

That kind of energy, enthusiasm, and can-do spirit pervades the group we’ve selected for the Grist 50 this year. Despite the new administration’s attempt to build a wall against progress — perhaps even because of it — they know the struggles they face and the problems they seek to solve are more challenging, and more crucial, than ever. And they have no intention of giving up or slowing down.

So on this year’s list you’ll find politicians from both parties, farmers raising food in the country and the city, a Silicon Valley entrepreneur, two chefs, a sketch comedian, and some kids with wisdom beyond their years. You’ll also find a generous helping of community activists, policy wonks, scientists, and scholars.

The result can’t help but make you feel optimistic about our collective future, no matter how much raw sewage spews from the nation’s capital.

“The Grist 50 shows that real change doesn’t begin in D.C.,” green jobs activist-turned-commentator Van Jones says. “It begins on the ground, in communities across the country. This next generation of leaders will create a sustainable, just future. It’s inspiring to see that Grist is celebrating these extraordinary individuals and making clear what a strong, diverse movement looks like.”

Last year’s inaugural Grist 50 reached and (we’re sure) inspired nearly 6 million readers. We’ve heard from many in that first cohort who saw their networks expand, their opportunities grow, and their effectiveness increase after we published our list. We think this year could get even bigger — certainly the work these folks do and the inspiration they offer is more needed than ever.

Best of all, Grist is helping our chosen problem solvers develop into a vibrant community, coming together and collaborating to spark urgent action. You’ll hear more about that in the weeks and months ahead, as we keep track of the mighty accomplishments from these fixers. Meet and follow them here.

Assembling the Grist 50 each year is made possible by readers like you. Please contribute to help. And if you like what you read, share it far and wide. We appreciate your support.