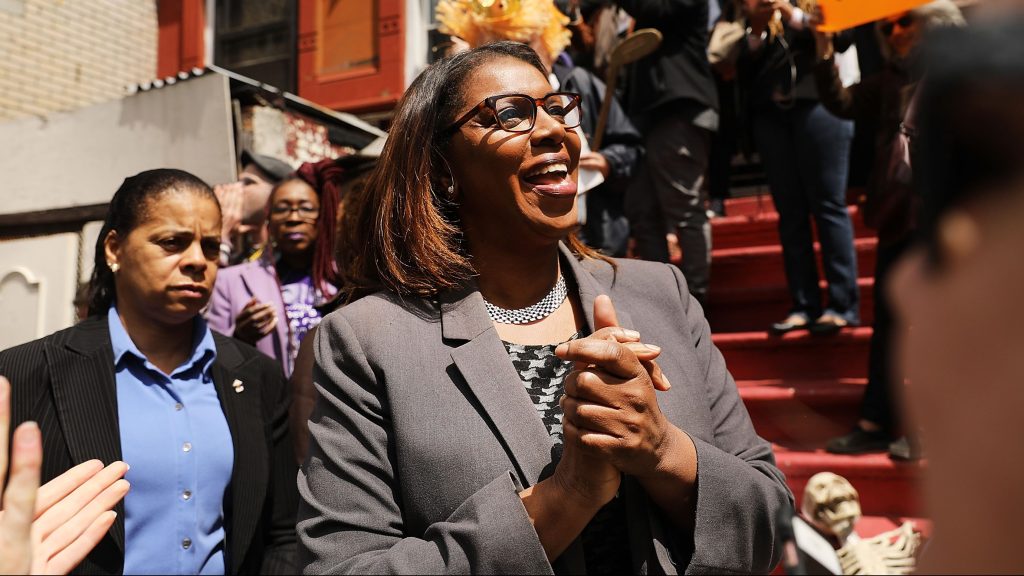 Letitia James at a protest of the GOP healthcare bill. Spencer Platt/Getty Images
james and the giant climate problem

As New York City’s public advocate, Letitia James is first in line to succeed Mayor Bill de Blasio. The first woman of color to be elected to hold citywide office in the Big Apple, she investigates complaints against city agencies and introduces legislation in the city council. Effectively, she’s the city’s official watchdog. And she recently set her sights on climate change, which she regards as an imminent threat to New Yorkers.

Last week, James held a public hearing to discuss what she called “the catastrophic consequences” of a warming planet. New Yorkers hoping the city would take the lead on climate-related matters — at a time when the federal government has all but abdicated responsibility — gathered at the Borough of Manhattan Community College in Tribeca, a neighborhood that James pointed out would be completely underwater by 2200 — if the world continues warming at its current rate.

Politicians and environmental groups met to call attention to the dangers climate change poses to New York’s most vulnerable, including children and seniors hospitalized during heatwaves and the disproportionate number of residents of color who live near heavy industry and storm-surge zones. According to Eddie Bautista, executive director of the NYC Environmental Justice Alliance, 420,000 of the 620,000 New Yorkers who live within a half-mile of storm surge zones and industrial areas are people of color.

Grist caught up with James after the hearing to talk with her about what she’ll do next to defend Gotham against the rising tides of climate change. (This interview has been condensed and edited for clarity.)

A. I saw the aftermath of Sandy, and communities of color — particularly residents in public housing, who represent low-income communities — are still reeling from the effects. I’ve seen working families on Staten Island, as well as in parts of south Brooklyn, who are still struggling. Given the fact that by 2100 or sooner, many areas of our five boroughs where a lot of low-income residents live will experience chronic flooding, it’s really critically important that we step up and put our money where our mouths are. And that we lead the way in going green, in terms of our buildings but also in terms of our retirement fund — which is one of the largest retirement funds in this country — and that we divest from fossil fuels.

Q. Last week, the bond-rating agency Moody’s recently said that it was going to incorporate climate change into its credit ratings for state and local bonds. What incentive might this give a city like New York to make changes?

A. Clearly, it’s going to affect our credit ratings and obviously that affects how our bonds are rated on the market. It’s really critically important that we take climate change seriously and that we incorporate it into our policy — and even further it would provide more incentive to trustees to vote in favor of divestiture.

Q. Why was it important to have this hearing now?

A. A lot of the individuals who were urging us to divest, unfortunately, were not being heard. It was important that we put a face to this campaign, and that their voices be heard and that they be at the table and talk about the impacts of climate change — not only in New York City but all across this country.

And it’s not something that we could wait on. We’re experiencing it. We’re seeing the impacts, from Puerto Rico to Florida to Houston. And we’re dealing with a federal administration that won’t act, so it’s basically going to be up to municipalities and states to act. And so, as an elected official in New York City, I don’t want to follow, I want to lead. I think it’s really critically important that we lead, and that’s why I decided to take the first step.

Q. What were some of the big takeaways from the hearing for you?

A. My objective is:

Q. Do you have buy-in from the mayor and others in local government on those goals?

A. As you know, to the mayor’s credit, we have clear goals: He has an initiative that he launched called 80 x 50, and he announced the building initiative. Obviously there are still some concerns that these actions don’t go far enough, but it’s a step in the right direction.

Q. What comes next after this hearing? How will you push for those changes?

A. As a trustee on the NYC Employees’ Retirement board — the largest public pension system — I proudly worked with others to gain a vote in support of divesting from coal, and I know that we are in the process of studying divestment from fossil fuels. And when that study is complete, what I would like to do is urge some of my like-minded trustees to vote in support of divestiture.

I think it’s just our moral obligation to address climate change, and we’ve got to lead as opposed to follow — and that has been the legacy of New York City.