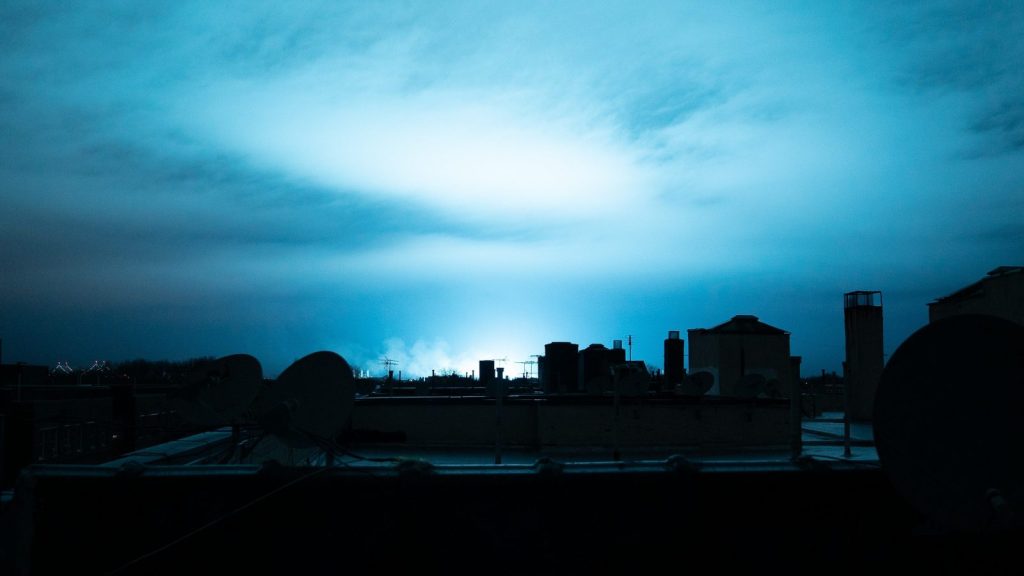 A little after 9 pm on Thursday night, the lights in my apartment abruptly shut off, and the night sky outside lit up a fantastic green-blue. The eerie light continued to pulse as I climbed out onto my fire escape to get a better view. On the streets below, people walked past with their phones pointed to the sky, adding to the Twitter frenzy that marked the first (and hopefully last) #astoriaborealis.

Anybody else seeing the portal from Ghostbusters when they look at #AstoriaBorealis? pic.twitter.com/7PbQtfSM3j

I legit thought it was the end of the world, or #Gojira or #Cloverfield and the N train I was on was headed towards it. #mta #astoria #blue #lights #nyc pic.twitter.com/XF5sfqHtx8

I hadn’t completely ruled out an alien invasion until I saw a column of smoke rising into the sky. The light, I realized, was coming from the direction of the nearby Con Edison substation in my neighborhood of Astoria, Queens. (The substation converts high voltage power from generating stations to a voltage low enough for residents and businesses to use.)

I learned later that what we were seeing was an arc flash, the result of an electrical fault that created enough light and heat to produce bright flashes akin to lightning. The New York Police Department initially tweeted that the cause was a transformer explosion — which ConEd later refuted, tweeting that an electrical fire led to a transmission disturbance.

It might just be me, but this Con Edison repair crew seems a little sketchy.#astoriaborealis pic.twitter.com/tmC39bNHtM

There are more than 80,000 transformers in Manhattan, and about 35 of those fail each year, Popular Mechanics’ Cassie Rodenberg reports. Much of the nation’s electrical structure dates back to the 1950s and ’60s, Rodenberg writes, and many older transformers are “nearing the end of their operational lives.”

Transformer explosions in Manhattan set buildings ablaze in 2010, 2012 (during Hurricane Sandy), and in 2014. Luckily, on Thursday there were no reports of injuries or damage to nearby buildings in Astoria.

HuffPost’s Alexander Kaufman points out that the incident took place at one of the state’s dirtiest power plants, which contributes to slightly higher levels of particulate pollution in Astoria than in NYC as a whole.

For the climate-minded, the strange blue lights served as a reminder that we need an infrastructure overhaul and a speedy transition away from fossil fuels.

“We need to flip everything on its head,” state Senator-elect Jessica Ramos told reporters last night, “and rethink the paradigm of exactly how it is that the city of New York and the state of New York is thinking about our future consumption of energy.”