My hometown, Berkeley, has a long history of making sweeping gestures at the bete noire of the moment. It called for the impeachment of President Donald Trump. It made mobile phones provide radiation warnings. And back in the 1980s, it declared itself a nuclear-free zone.

But now Berkeley has a foe that it could actually do something about. This week the city declared a state of “existential climate emergency” and said it plans to eliminate all city greenhouse gases as soon as possible. The city also pledged to start drawing carbon dioxide out of the atmosphere, turning itself into a so-called “carbon sink” by 2030. It hasn’t defined how it will do this.

“Steadily rising temperatures have brought intensified wildfires, drought, and storms that have displaced and threatened thousands of people in California, and millions more around the world. We must act now,” said Cheryl Davila, the city councilwoman who proposed the resolution.

This is the kind of commitment governments around the world would be making if they actually took climate change seriously. Berkeley deserves kudos for taking this first step. The question is, will they take the next step? There are plenty of obstacles in the way: NIMBYs, town politics, and the powerful inertia of the status quo.

Cities that have pledged to eliminate their carbon emissions really can make a difference. In April, researchers found that cities in California can prevent a major portion of the state’s emissions all by themselves. But doing so would require huge changes, including a political reorientation.

The researchers looked at Berkeley specifically and found that the most significant way for the city to shrink its carbon footprint was by building more housing — filling in parking lots and vacant areas. 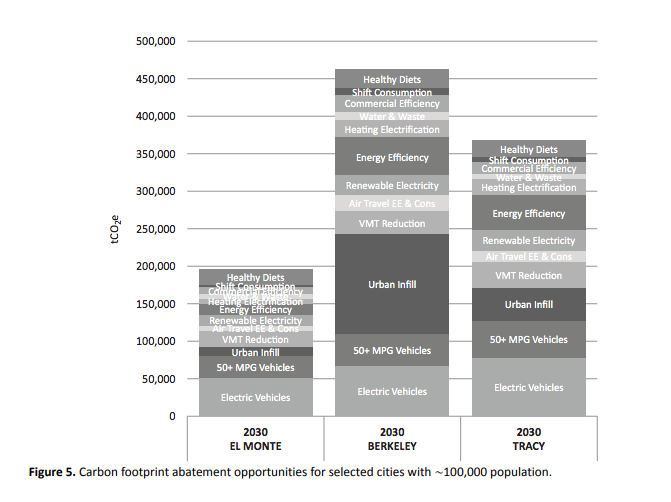 Building housing is the most significant way Berkeley can shrink its carbon footprint. Jones et al.

The problem is, it’s fashionable to say you support housing in Berkeley, then add a list of conditions and caveats that would make it very hard to to build anything. One of Berkeley’s subway stations is surrounded by a massive surface parking lot, which could turn into condos. But at the first community meeting to discuss the idea in March, neighbors lined up to oppose that change. The city council later opposed a state bill that would have made it easier for the regional rail system to build new housing.

Filling in cities with denser housing makes them more walkable, reducing the distances people have to travel and making transit and bike lanes more effective. Building more housing also allows more people to move into these environmentally friendly cities. Berkeley has traditionally put proposals for new apartment buildings through an exacting and expensive series of public hearings that can stretch on for years. The politics in Berkeley, and in many cities, usually favors existing residents.

Take this week’s meeting, in which the council pledged to eliminate emissions. Minutes earlier, the council had advanced regulations that would ensure new buildings didn’t mess up the views of existing residents. That would add another hoop for any housing development to jump through.

The City of Berkeley is considering new rules to protect views for homeowners in the hills from the scourge of housing.

On the same agenda: A declaration of climate emergency that the city can only meaningfully address with … housing.

It’s understandable that many people want to keep their neighborhoods from changing. After all, they moved to Berkeley because they liked the way the city looked. As a result, things have remained pretty static. The current population stands at around 121,000; in 1950 it was 114,000. If Berkeley really is going to embrace the low carbon transformation, it will also have to change its approach to housing. And it would magnify its effect if Berkeley embraced development and allowed a lot more people to move in and enjoy a low-carbon lifestyle.