One very bad habit is fueling the global recycling meltdown 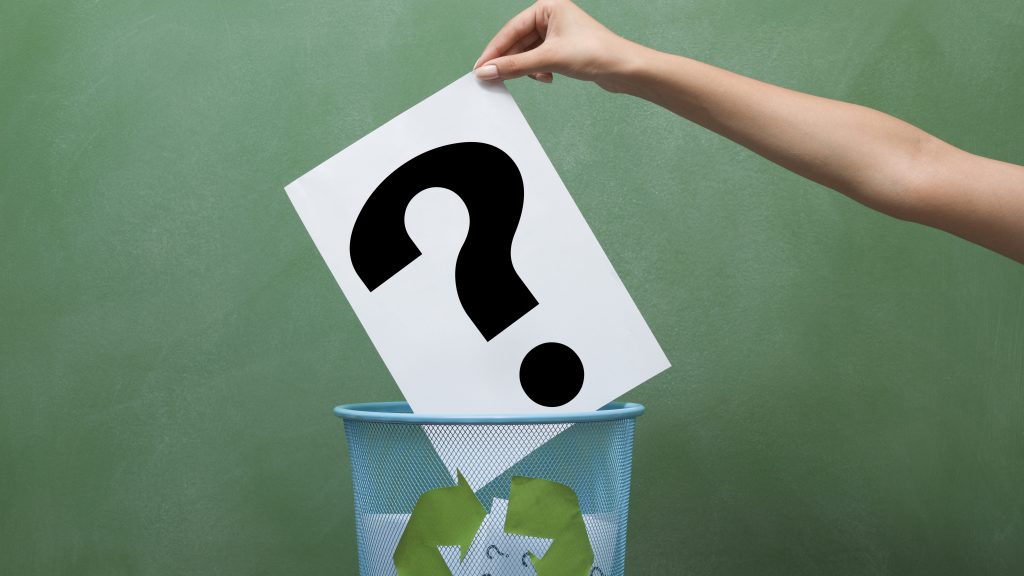 One very bad habit is fueling the global recycling meltdown

If you’re like me, you’ve looked at a paper coffee cup or an empty tube of toothpaste and thought, “Is this recyclable?” before tossing it in the recycling bin, hoping someone, somewhere, would sort it out. People in the waste management industry call this habit “wishcycling.” According to Marian Chertow, director of the Solid Waste Policy program at Yale University, “a wishcycler wants to do the right thing and feels that the more that he or she can recycle, the better.”

Well, I hate to break it to you, but this well-intentioned reflex is doing more harm than good. Not only that, but wishcycling is playing a big role in the current global recycling meltdown.

First, a bit about the process. When my recycling is scooped up by a truck every week, it goes to a materials recovery facility (MRF) run by a company called Recology. After the goods travel through the facility’s jungle of conveyor belts and sorting machinery, they are shipped as bales to buyers in the United States and abroad, who turn that material into products like cereal boxes and aluminum cans.

But in an effort to get more people recycling, companies like Recology have become victims of their own success. In the early 2000s, many communities switched from a dual-stream system — where plastics and glass, and paper and cardboard each had their own bins — to single-stream, in which all recyclables go into one bin and the sorting is done at the MRF. But when “we decided to put all the things together, we decided to create a contaminated system,” says Darby Hoover, a senior resource specialist at the Natural Resources Defense Council. It’s almost impossible, for example, to put paper in a bin with beverage containers without the paper getting wet, which makes it unrecyclable.

And it doesn’t help that many of us are wildly confused about what we should recycle. A decade ago, according to one estimate, 7 percent of the objects Americans put into their bins weren’t supposed to be there. Today, it’s 25 percent. “For every ton of material we get in, there’s 500 pounds of trash that has to be taken out of it,” says Brent Bell, vice president of recycling opera­tions at Waste Management, the country’s largest waste disposal company. This garbage ranges from recyclables that are too dirty to process — mayonnaise jars still coated in a thick layer of eggy goo, for example — to items that just shouldn’t be there in the first place, like plastic bags.

Nearly a third of us have no idea what types of plastic our municipalities accept, according to a 2014 survey. When I did a quick audit of my household’s bin in April, I found three plastic sandwich bags, a plastic freezer bag, and a disposable razor — none of which are recyclable. (Though places like San Francisco let you recycle plastic bags if you bundle them.) Our uncertainty leads to climbing costs and waning productivity at recycling facilities; contamination costs Waste Management about $100 million annually, or 20 percent of its total budget.

In July 2017, our recycling system faced an even bigger setback: China, which had been buying about half of U.S. plastic, announced it would ban the import of 24 materials, including mixed plastics, largely because the goods we sent them were too contaminated. The policy, which took effect on January 1, 2018, sent shockwaves through the industry.

“It’s a global recycling crisis,” says Johnny Duong, director of international sales at California Waste Solutions, a collection company whose costs have risen by 200 percent since the ban. The situation isn’t likely to improve anytime soon: China’s policy could displace an estimated 111 million metric tons of the world’s plastic waste by 2030. Some of that is going to Turkey, Vietnam, and Indonesia, but according to National Waste and Recycling Association spokesperson Brandon Wright, those countries can’t handle the volume because they don’t have China’s recycling infrastructure.

The United States doesn’t either. Author­ities in some cities have tried to change behavior through policy measures. Oakland, California, for example, fines residents $25 if they place “the wrong materials” in recycling containers three times within six months. Several states have banned single-­use plastic bags. At the federal level, it would help to follow the European Union’s lead and establish a national policy that defines what is recyclable rather than leaving that up to municipalities, says Kate O’Neill, an associate environmental professor at University of California–Berkeley and author of the forthcoming book Waste. The Environmental Protection Agency is still in the early stages of developing a national framework, a spokesperson tells me. Presidential hopeful Bernie Sanders proposes in his Green New Deal a national recycling program that’d require companies to pay to take back consumer scrap in order to build things like wind turbines, batteries, and other renewable energy equipment with as many recycled materials as possible.

For consumers, maybe the old mantra needs an update: Don’t just recycle — reduce and reuse. Zero-waste grocery stores offer shoppers house-cleaning products and bulk groceries without the plastic packaging. A new service called Loop, available in the mid-Atlantic since May, delivers items like ice cream and shampoo in reusable containers to people’s doors and collects the containers when they’re done. (It remains to be seen how many customers will be willing to pony up the deposit fees, which range from $1 to $15.75.)

When you do recycle, you should know what belongs in the bin: Rinsed plastic containers and glass bottles, cardboard, and beverage and food cans are almost always acceptable. Plastic bags, electronics, and paper covered with food generally are not. Neither are insulated coffee cups and toothpaste tubes, in most cases. And if you’ve checked your local guidelines to see if an item is recyclable and you still aren’t sure, it’s best to ignore your wishful instincts and throw it in the trash.