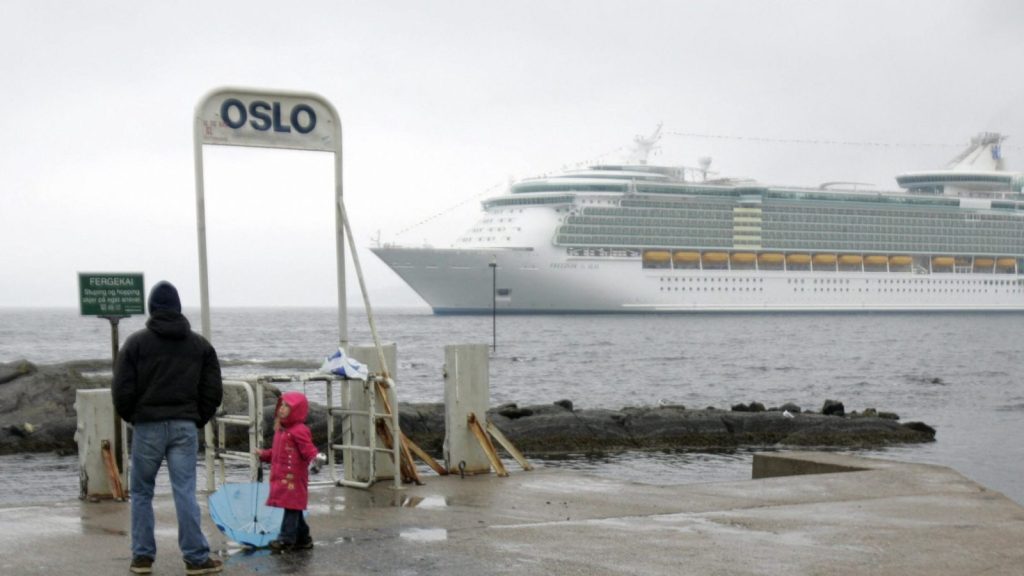 AFP / Staff / Getty Images
all aboard

The edge of Oslo’s Ekeberg Hill gives quiet, unobstructed views of the Nordic city’s islands and bustling port. At the Sjursøya container terminal, cranes swing around, stacking multicolor containers in neat rows and columns. On the other side of the port, ferries load and unload passengers. A massive cruise ship idles while its inhabitants wander around the city.

The Port of Oslo receives between 50 and 70 calls a week and 12,500 containers a month, and the ships and shore equipment help produce 55,000 metric tons of greenhouse gas emissions a year. That last figure is what Oslo is trying to change. By 2030, the port aims to make an 85 percent reduction in its emissions of carbon dioxide, sulphur oxide, nitrogen oxide, and particulate matter, with the goal of becoming the world’s first zero-emissions port.

“It’s very ambitious, but at the same time it’s what is necessary if we are going to reach the Paris Agreement,” says Heidi Neilson, head of environment for the Port of Oslo. The port’s 17-point climate action plan includes refitting ferry boats, implementing a low-carbon contracting process, and installing shore power, which would allow boats to cut their engines and plug into the grid when docked.

The effort is part of the city’s mandate to cut overall emissions by 95 percent by 2030 — a decree that spares no person nor industry. The city’s climate budget and strategy is an all-hands atonement for the oil industry that made Norway into a very rich country.

“To reach the targets, all sectors have to reduce their emissions. Hence, the port and the maritime industry in Oslo must decarbonize at the same speed as the other sectors (i.e. energy supply, heating, construction, waste and combustion, road traffic),” writes Oslo Climate Agency Director Heidi Sørensen in an email to CityLab.

In August, the port signed a contract with Norwegian nonprofit the Bellona Foundation to move full speed ahead on cutting emissions — whether its users like it or not.

According to the U.N.’s International Maritime Organization, between 80 and 90 percent of the world’s trade by volume is transported by sea on high-sulphur fuel oil — the dirtiest fuel there is. That’s about 94,000 vessels carrying 10 billion tons of crude, chemicals, corn, and cargo, to the tune of $4 trillion a year and nearly 4 percent of global greenhouse gas emissions.

In Oslo, container ships aren’t the only problem. Ferries running to Denmark and Germany are responsible for nearly 40 percent of port emissions, while local ferries account for 12 percent, and onshore handling and transport equipment accounts for 14 percent. To address local ferry emissions, the port awarded a contract to Norled, which is currently tasked with electrifying three of 10 existing passenger ships. When all three of these heavily used ferries are outfitted with batteries, Norled estimates the transit authority’s port emissions will decline by 70 percent. Norled delivered the first electric refit in September — a job that took 150 workers a combined total of 25,000 hours. MS Kongen now has the equivalent of 20 Tesla batteries on board.

Progress is slower when it comes to bigger ships. Cruise and cargo ships still can’t cross an ocean on battery power alone because of the cumbersome size and weight of the required batteries. Hydrogen is gaining traction as an environmentally friendly option compatible with long-haul shipping. The fuel emits water and can be produced with renewable electricity. Unfortunately, it’s also prohibitively expensive at this early stage in its maritime-sector development.

“Hydrogen is, I think, the only energy carrier that is completely CO2 free and able to power ships on longer sailings. If you need to get the ship to sail from Rotterdam to New York, you cannot do it with batteries. You can only do it with hydrogen,” says Alex Ruijs, a senior consultant with Royal Haskoning DHV who works on electrical power and energy in the maritime and aviation sectors. However, he adds, the fuel is still 10 to 15 years away from being commercially competitive. Technologies to reliably produce other synthetic fuels are also not yet economically viable.

The Bellona Foundation’s maritime senior advisor Christina Ianssen says shore power is a key element to maritime decarbonization that can be implemented right now. It would enable refitted ships to keep their lights, cooling systems, and other systems and equipment on by plugging in to the hydroelectric grid rather than running the engine. It would also power equipment like cranes, which normally run on diesel. “Even though [shore power] doesn’t solve all our problems, it helps push for a shift that is technically feasible today,” says Ianssen.

As with hydrogen, shore-power compatibility hasn’t reached the critical mass required to become economically attractive. So, getting shipowners on board may take both the carrot and the stick: Lower port fees and electricity costs to reward compliant ships, and revise contracting processes to command terminal builders and shipping companies to obey low-emission rules. “It sort of forces the shipowners to start investing in technologies they haven’t thought about before,” says Ianssen.

A handful of other ports around the world — in, for instance, Los Angeles and Long Beach, Auckland, the Spanish city of Valencia, Ecuador’s Guayaquil, and Baku in Azerbaijan — also have carbon-neutral and zero-emission dreams. In October 2019, the Port of Los Angeles unveiled two new battery-electric top loaders. Rotterdam, which is Europe’s biggest port, is using zero-emission port equipment.

But cutting maritime emissions is not only a local measure. The problem with solitary ports taking a firm environmental stance is that ships can simply head up- or downstream to a competitor port and unload their wares there. Then, the containers get driven around on land instead, defeating the purpose of a zero-emission policy. To counter this effect, Sørensen from Oslo’s climate agency and Neilson from the port say other Norwegian ports have to come on board.

Finding that common ground with local and international partners — and sometimes competitors — is essential to the green port movement. Neilson points to the collaboration between the ports of Los Angeles and Long Beach, which are technically competitors. “In Los Angeles, they have fierce competition in regard to the different terminals … but at the same time they say, ‘We don’t compete on security and we don’t compete on environment.’”

If ports in the Oslofjord and across the region can band together to do the same, Neilson is confident Oslo won’t lose business. But, if becoming zero-emission does mean losing customers in the short term, that’s a price the city is willing to pay. “I think it’s a powerful message that this is possible here, and it’s not just [possible] because we have a lot of funding,” says Neilson. “It’s the right thing to do, and it’s the right development we need in many port cities around the world.”