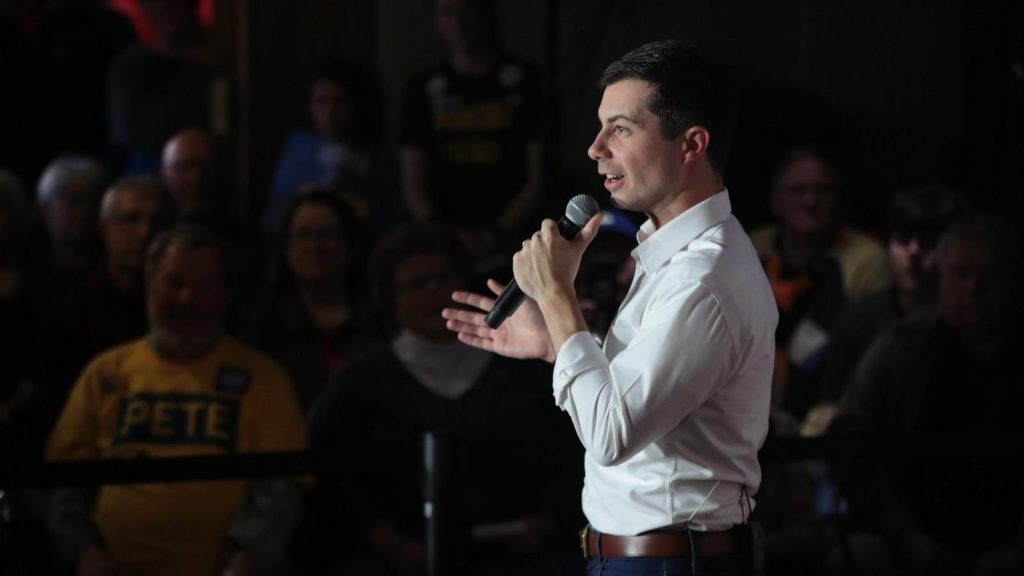 Over the span of 18 months, in August 2016 and February 2018, South Bend, Indiana, was struck by a pair of historic floods — the kind of low-probability catastrophes that have become terrifyingly common in a warming world. The small Midwestern city is still dealing with the consequences.

For its mayor, Democratic presidential candidate Pete Buttigieg, those floods serve as a tangible reminder of the environmental challenge the world faces, and the inspiration for the climate plan he released in September.

Buttigieg’s scheme isn’t the most ambitious: Compared to Vermont Senator Bernie Sanders’ $16.3 trillion estimate, Buttigieg wants to spend closer to $2 trillion, and sets a longer timeline for pollution reduction. But the 37-year-old candidate’s approach to the crisis reflects both his creeping centrism and his youth: It’s a mix of the urgent and the politically practical. Emphasizing the rural and non-coastal interests that are often dismissed in issues of environmental adaptation, Buttigieg wants to set up and fund regional resilience hubs, push for greener agricultural methods, and retrain workers in fossil-fuel industries like coal mining.

Last month, CityLab sat down with Buttigieg on the banks of the St. Joseph River in South Bend — one of the sites of the recent flooding. Parts of the conversation will appear on the upcoming Climate Desk/Weather Channel special “2020: Race to Save the Planet” (airing November 7 at 8 p.m. ET), in which eight presidential candidates discuss their plans for confronting the climate crisis. This interview has been condensed and edited.

Q. For a lot of people, climate change still can seem like an ideological or an abstract problem. I’m wondering if you could paint a picture — what does climate change look like currently, and what might it look like in 30 years, when you’re in your 60s?

Twice in the space of two years, we had extreme weather events — floods that are only supposed to come along every few hundred years. It’s a sign to me that the predictions and warnings that we’ve been seeing from the scientific community for years are coming true on an accelerated basis. What that means is that by 30 years from now, this could be the dominant fact of American life. It could be holding back opportunities for a new generation, transforming and destroying our economy.

Or we could get ahead of it. The way I would prefer to envision climate change is as a major national challenge that we rose to as a national project, and led the world in dealing with, and stood taller because we did it.

That’s why my vision on addressing climate change is not just about all of the technical changes we need to make, the investments we need to have, and the need to hold companies accountable for doing the right thing. It’s also about making sure we’ve invited everybody to be part of the solution: from volunteers in a national service program to the agricultural sector, which we should be funding and supporting in sustainable agriculture practices.

If we get this right, it doesn’t have to be partisan. This is too important, too serious, and too urgent an issue for us to allow it to continue to be viewed through a partisan lens. There’s no time to argue over whether climate change is real. We’ve got to get to work on making something happen.

Q. How do you think cities should think about the often-emotional decision of whether to rebuild or to retreat? And how would you incentivize those retreats and fund those rebuilding?

A. A good example of this comes from Cedar Rapids, Iowa, which experienced a very destructive flood. People have decided to move on, but it wasn’t forced. It was supported. The families were made whole. So how does our future planning accommodate the fact that a 100-year flood isn’t what it used to be? That means making sure that we have adequate resources from an insurance perspective and from a planning perspective to ensure that our future communities are more resilient and are built with these extreme weather events in mind.

Q. Along with rejoining the Paris climate accord, you’ve pledged to convene a “Pittsburgh Climate Summit” in your first 100 days in office. I’m wondering what the significance of that global and local pairing is, and what you hope to accomplish at that summit.

A. The idea behind the Pittsburgh summit is that so many local governments, cities, mayors, counties, sometimes states are acting on their own because they got tired of waiting for Washington. Some of the best ideas on sustainability — from installing a local electric-vehicle charging system, to ensuring that community standards rise higher and meet the Paris accord — are going on across this country and across the world in a network of cities that aren’t waiting for their national governments to catch up. I want the White House to be an ally for those kinds of communities. Convening them in Pittsburgh will be an opportunity to share the best of what’s going on in those cities and towns, and working on ways that the federal government could be supporting them.

Q. Many cities and states are trying to push people into a less car-centric lifestyle. That’s a challenge for cities with inadequate public transportation systems, or whose built environments are very sprawling and car-centric. How would you encourage people to turn away from personal vehicles and to build more connected and more green cities?

A. Well, you know, design in cities, especially through the 20th century, really revolved around the car. I’m trying to make sure that design for the future revolves around the human being. Sometimes that means car transportation and sometimes that means walking, biking, or public transit.

We can’t expect people to move beyond personally owned vehicles if there’s not a good alternative. So we’ve got to make sure that between ride-sharing, public transportation, and just good old fashioned walking and biking, we’ve got an array of options right now. The United States subsidizes driving a tremendous amount. We’re more reluctant to support transit or things like trains. When I’m president, I envision making that a greater balance and supporting cities that are trying to do that, too, because if we get it right, it’s also more sustainable, more healthy, and more economically friendly.

For example, when we transformed the heart of [South Bend], including calming down our traffic instead of just getting cars through it as quickly as possible, it led to growth in small business, because we have a more vibrant core in our downtown. When we change our mentality, it’s amazing what possibilities can be unlocked.

A. One of the things we’ve seen is that neighborhoods and communities of color are always disproportionately harmed when we have these extreme weather events. It’s why, first of all, there needs to be more economic and political empowerment for people of color. That’s a focus in my Douglass Plan, an agenda to deal with the impacts of institutional racism in this country.

We also need to look at how our neighborhoods are set up. Many of them were segregated by design. I’m proposing a twist on the Homestead Act — a 21st-century version of that — that supports people living in historically redlined neighborhoods that are now beginning to get gentrified.

We also just need to make sure that we have a political system that is capable of hearing the voices of those who have been excluded. In many ways, local processes can lead the way toward what we need more of in our national government.

Q. You differ from others in the presidential race, like Senator Sanders, in calling for a tax on carbon. We saw in the Yellow Vest protests in France how anger over fuel taxes helped trigger a populist revolt. How would you structure a carbon tax so that everyday Americans won’t feel the economic effects?

A. The key to making a carbon tax work for everyday Americans is to rebate out the value to the American people every year, and do it with a progressive formula so that most people are better off than before. The idea of a carbon tax is not to suck money out of the economy and bring it into the government — at least not for me. For me, the idea is to make sure that our prices more accurately reflect the true cost, including the cost to our own future, of things like fossil fuels. We can do that without making most Americans worse off economically if we have a rebate — a dividend, if you will — that goes out to every American based on what’s been collected.

Q. In September, you visited Conway, South Carolina, to release a federal disaster relief plan. How will that plan account for some of the mistakes made in past administrations with regard to hurricane recovery?

A. One thing that we’ve learned from recent disasters, including the one where we’re sitting right now, is that there is a complex, overlapping bureaucracy when it comes to getting disaster relief. The last thing you want somebody to have to do when they’ve been put out of their home by a disaster is have to navigate all of these different agencies to figure out how to get help. I’m going to set up a disaster commission tasked with simplifying that process and making sure that we secure the funding sources for relief. Right now, all too often we see administrations dipping into [these funds] for other purposes.

Q. You mentioned holding companies accountable for their role in climate change as well. At tech companies like Amazon, some workers are staging protests and walkouts to draw attention to their employers’ inaction. How would you as president think about galvanizing companies and the private industry?

A. Well, the beauty of the carbon tax and dividend is it does a lot of that work in terms of realigning the signals in our economy. We also have to make sure that there is a strong Environmental Protection Agency, run by somebody who actually believes in environmental protection and in climate change. This doesn’t have to be anti-business. What I want to do is recruit businesses to ensure they’re doing the right thing and to recognize how private-sector growth is a big part of how we reach the clean energy economy that we need. But that means making sure that we’re honest about the long-term costs of inaction when it comes to what carbon emissions are doing to our very ability to live in the communities that we have built over these last decades and centuries.

Q. You’ve also talked about how rural voters could soon be the future of climate-change voters. I’m wondering how you mobilize that cohort?

A. I’m excited about the possibility of inviting agriculture to be a big part of the solution. Science tells us that with cover crops and soil management, we could be taking in as much carbon on farms around the world as the entire global transportation sector is putting out right now.

We have the science to tell us it can be done. We need to not only invest in research, but also support the farmers, so if the [costs] are not quite penciling out, we make them whole. If we’re willing to do that over a trade war, we should absolutely be willing to do that as a way to incentivize and reward farmers who are on the cutting edge of the quest for the zero-emissions farm. If we can do that here in America, that achievement will spread around the world and be a tremendous part of the solution.