Water activist Steve Tamar expected just a dozen students to show up to his citizen-science training at Maricao High School in western Puerto Rico this past October. Instead, the sweltering hot auditorium was packed with teenagers looking to help test the island’s water.

“Eventually the whole school got involved one way or another,” Tamar recalls, adding that teachers incorporated the theme of water testing into their curriculum.

Puerto Rico faces a water crisis. Even before Hurricane Maria, the U.S. territory’s potable water situation was bleak. In 2015, the island reportedly had the worst rate of drinking violations of the Clean Water Act of any state or federal territory.

Maria damaged nearly all of the island’s water systems. After the storm in September, communities took water from anywhere they could find it, drinking from untested springs and sticking PVC pipes on the sides of mountains, with little regard for contamination levels. While Maricao High School had water again by Tamar’s visit, the majority of its students were still without running water at home.

Tamar is a member of the Blue Water Task Force, a program run by the Surfrider Foundation, a Southern California-based environmental nonprofit devoted to protecting oceans, waves, and beaches. The task force is the largest citizen-science organization in Puerto Rico. And since 2007, it has been testing bacteria levels at beaches on a weekly basis and measuring them against federal water standards.

Post-storm, they teamed with local partners to help test drinking water and determine where the need for potable water is greatest.

Six months after the storm, the task remains daunting.

Puerto Rico is home to some 300 small water systems, or water utilities, that serve fewer than 10,000 people. The smallest of these systems — those serving under 3,000 people — are overwhelmingly owned and operated by the rural communities they serve and not by the Puerto Rico Aqueduct and Sewer Authority.

“Most of these communities lost a lot of their homes,” organizer and researcher Graciela Ramirez-Toro explains. “So water becomes a second issue.” Her group, the Center for Environmental Education, Conservation, and Research at Inter American University of Puerto Rico, has been working on rebuilding water systems after the storm. It’s been difficult to get information on safety and need, though, given the lack of a centralized effort.

And that’s where groups like Tamar’s come in. Soon after the training, a dozen or so students began visiting different sites in their community and performing field tests on a regular basis. There is a very strict, six-hour time limit within which samples must make it back to the lab’s incubator. In the absence of cell service, the students had to show up at their drop points by the agreed upon time and rendezvous with teachers who would drive several hours, often through dangerous neighborhoods, to deliver the samples to the Task Force’s lab.

“They had to be really well-organized,” Tamar says of the young volunteers. 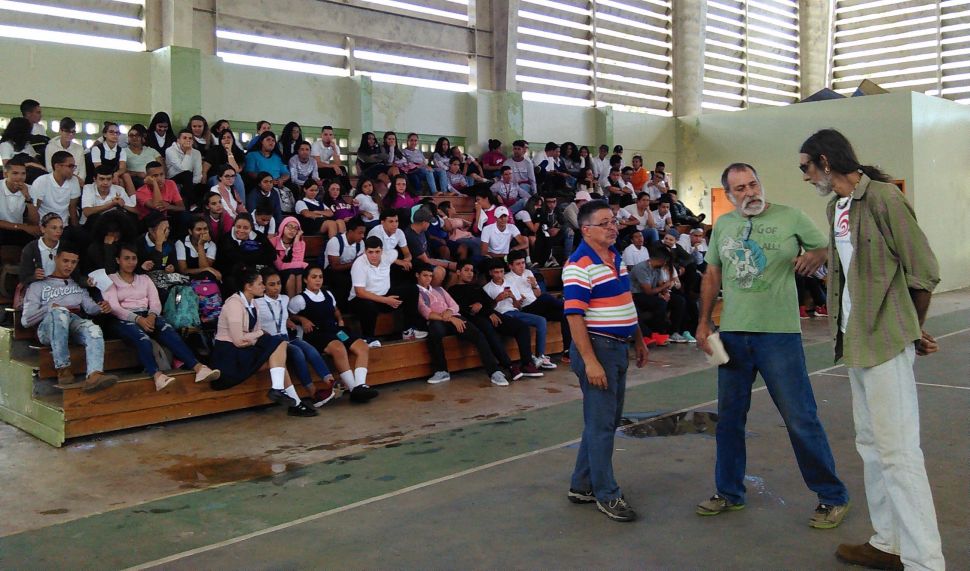 In Maricao, the kids reported that people were getting water from makeshift pipes and vessels protruding from wells and springs. Tamar and his colleagues documented significant fluctuations in bacterial count at many of these sites. Nearly every source they tested had detectable, and at times, significant amounts of bacteria, like E. coli, which can cause diarrhea and other illnesses.

The Task Force used pen and paper to make color-coded signs and posted them at the sites. Yellow meant the water source had detectable amounts of bacteria, and the group left a recommendation to boil water for five minutes before running it through a filter. Red meant the water had high bacteria counts, so they suggested boiling for 10 minutes before filtering.

Tamar says that restoring the water systems would require a significant government incentives and money. For the time being, his crew can do little else besides pass out water filters and spread information — though they intend to expand their operations to the rest of the island.

Before the storm hit, Tamar says he spent the past four years trying to get the Environmental Protection Agency to officially recognize the Blue Water Task Force’s data and take corrective action based on its findings. The new administration, he says, has been even more difficult to work with.

In the meantime, Tamar continues to work with volunteers like those at Maricao High School to educate smaller communities and ensure they’re drinking the safest water possible. Today, the Task Force set its eyes on fundraising outside of Puerto Rico to help with remediation efforts on the island.

“We’re going to have to continue this effort for years,” Tamar says.