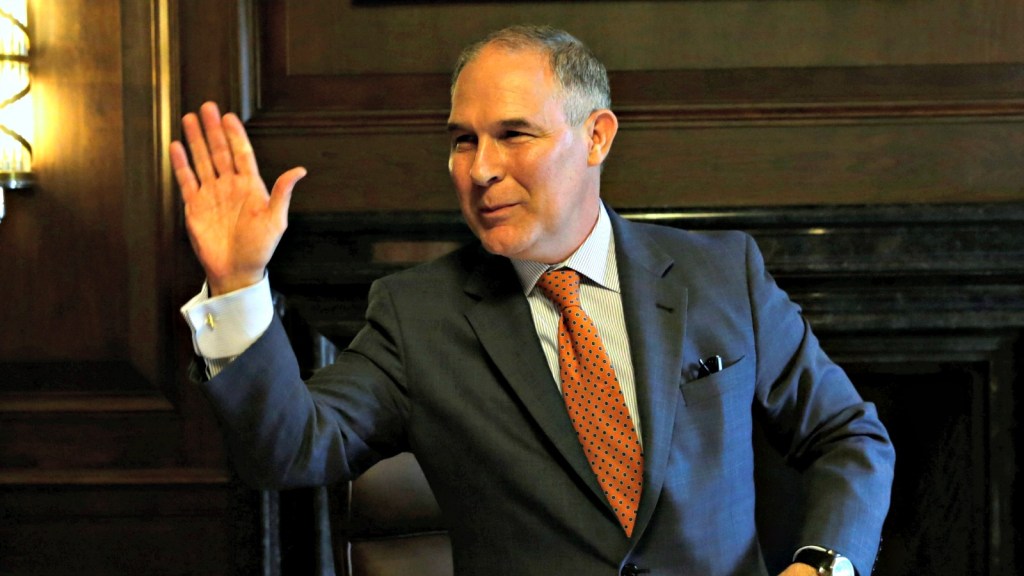 Environmental Protection Agency chief Scott Pruitt did something out of character this week: He gave a wide-ranging interview to a few mainstream media outlets in which he discussed a number of policy issues he’s largely avoided talking about publicly since taking over the EPA.

The interviews were unusual not just because of the subjects he covered, but because of the venues, Politico and Reuters. Since taking office, Pruitt has almost exclusively relied on a small number of conservative media outlets to tell an upbeat version of his leadership at the EPA, with occasional detours into the Sunday news shows. He’s granted interviews to conservative writers at the Wall Street Journal, Breitbart News, The Federalist, and Murdoch-owned New York Post. He’s taken to the airwaves to chat with conservative hosts on CNBC and Fox News, as well as MSNBC’s Morning Joe. On a few occasions, Pruitt has done his version of town halls, taking questions from members of business groups like the Oklahoma State Chamber of Commerce — a familiar venue, since he was once the state’s attorney general — and conservative audiences at the Conservative Political Action Conference, Heritage Foundation, and The Federalist Society.

The EPA’s public affairs staff now focus on promoting mostly right-wing outlets, some with ties to the Trump administration, on the EPA’s social media feeds and in news releases. The result? An echo chamber cheerleading the EPA’s regulatory rollbacks, Trump’s withdrawal from the Paris climate agreement, and its newfound anti-science denial.

Liz Purchia, a Obama-era EPA communications staffer, says the EPA’s attention to right-wing audiences resembles Trump’s tactics at the White House. “They’re tightly controlling [Pruitt’s] public events and interviews, which isolates him from most Americans and instead plays to Trump’s base,” Purchia said in an email. “They’re not trying to use communications tactics to reach a broad audience.”

Anyone who’s been paying attention to the news would see that the EPA would have a lot of information to share. It has begun to reverse a number of air, climate, water, and chemical regulations put forward during the Obama administration. In the last few weeks, Pruitt has delayed a methane regulation for oil and gas, a rule to prevent accidents at refineries and hazardous facilities, stricter standards for the air pollutant ozone, and a water rule that would have expanded clean water protections to streams. At the same time, Pruitt has refused to renew dozens of scientists’ positions on the EPA’s science advisory boards and wants to set up a new kind of task force to undermine climate science.

The disconnect is between EPA messaging and certain realities. From the way Pruitt and Trump administration staff have been telling it, the EPA is doing amazing things, as can be seen in a press release from the agency in mid-May that recapped “all of the good news from an EPA that is protecting the environment and American jobs.” Pruitt’s interviews and EPA press releases depict an agency that not only pleases industry and Republican “stakeholders,” it also delivers cleaner water, smarter science, and higher air quality. The almost universally denounced U.S. pullout from the Paris climate agreement “was received well” by allies at the G7 environmental summit earlier this month, Pruitt reported to Trump at a Cabinet meeting.

One space that has served as a reliable Pruitt echo chamber has been on Hugh Hewitt’s radio show. Hewitt, a conservative radio host who contributes to the Washington Post and now for MSNBC, is a sympathetic interviewer. In one program he asked whether the “hyper-partisan” coverage of the EPA has been “wearying” — Pruitt replied that negative coverage is Obama’s fault. “I know you are not a climate denier,” Hewitt added, “I know you very well.” Hewitt didn’t explain how, but he might have a special insight into the inner workings of the EPA since his son, James, is a Trump appointee as an EPA Special Adviser for Public Affairs — a connection the talk show host disclosed in a recent Washington Post column praising the administrator for becoming a “domestic policy star.”

In that interview, which came the morning after the Paris decision, Hewitt asked Pruitt if his critics on the New York Times editorial board “have any agenda of persuasive engagement on genuine environmental progress with economic growth?” Pruitt expanded on Hewitt’s point, going on to complain that his critics are “climate exaggerators” interested only in partisan political rhetoric.

Besides seeking out friendly interviews, Pruitt repeatedly cites friendly columnists to validate some of his most controversial actions. In a July interview with Reuters, he credits a Wall Street Journal op-ed written by Steve Koonin, a theoretical physicist who worked in Obama’s Department of Energy, and Bret Stephens, a conservative New York Times columnist who dismisses some impacts of climate change, as the evidence of the legitimacy of his positions. He may even have wanted more support from them. In early June, Stephens said Pruitt “dragged me into” his press conference on the Paris decision. “I’m supposed to comment on the news, not be the news, so I tried to ignore it,” Stephens wrote. “But I guess it’s unignorable.”

White House strategist Steve Bannon’s former business, Breitbart News, has also been a reliable megaphone for Pruitt’s EPA, despite a critical column it ran a few months ago about what the writer saw as Pruitt’s reluctance to dismantle the EPA’s climate change work. Since then, Breitbart and Pruitt have appeared to make up. As Breitbart gloated, it was the first media outlet where Pruitt floated his controversial proposal to form a so-called red, blue team exercise for a “transparent discussion about CO2.”

Pruitt has also given relatively obscure conservative websites a higher profile, because of their favorable coverage of him. Consider the little-known conservative aggregation website called Need to Know Network (NTK), started by political operatives who are connected to America Rising. According to Politico, NTK was started by Joe Pounder who cofounded America Rising. An arm of America Rising, America Rising Squared, ran ads and a web­site sup­port­ing Pruitt before his confirmation hearings. In Facebook and Twitter posts and at least one news roundup, EPA has repeatedly showcased NTK’s promotional spin:

.@NTKNet reports that we’re putting states back in the driver’s seat on many regulations: https://t.co/mDZfEaJpNO

Under @EPAScottPruitt’s leadership EPA is going in a new direction. Read about the changes made so far on @NTKNet. https://t.co/GgJIhFPNed

Pruitt promised to “listen” as EPA administrator, but his media strategy appears to concentrate more on listening to the base and talking about his widespread support. For Pruitt, this might be the point. On its website, the EPA describes its mission “to protect human health and the environment.” But Pruitt’s goal is not protection, it’s “winning.” Winning exactly what is not clear, but the EPA is on message.

We had another winning week at EPA. Read our weekly roundup of news: https://t.co/tqSqHShXTT