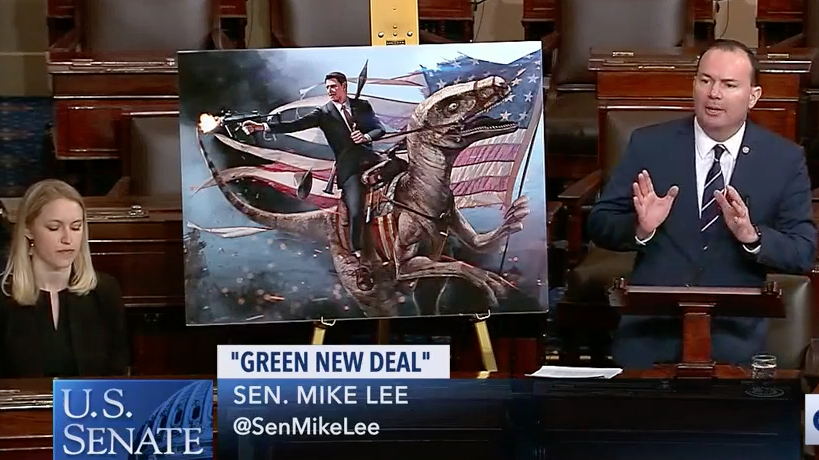 Senator Mike Lee of Utah gave a speech about the Green New Deal Tuesday morning on the floor of the U.S. Senate that included references to Star Wars, Aquaman, and the SyFy channel’s Sharknado series. While acknowledging the skill involved in relating the bold climate proposal to anything involving Steve Sanders from Beverly Hills 90210, Lee’s rant should sicken any American who has even a passing interest in living in a country with a functioning government.

In debating the resolution, Democrats, ever the Charlie Brown gearing up to kick a phantom football, are talking about the seriousness of climate change, the impacts on their constituents, and the moral obligation to act. Meanwhile, Republicans are talking about the end of airplanes and the end of cows — two elements that aren’t in the resolution, but were alluded to in a FAQ mistakenly circulated via Ocasio-Cortez’s office — and are bringing an end to anything approaching a serious conversation about one of the most important issues facing the country and the world.

But it’s Lee whose speech really plumbed the depths of civil discourse in the halls of American government today. In it, as he attempted to take down the Green New Deal, he debased himself, his chamber, and the American people who rely on his unabashedly awful judgement to help make decisions about our future.

Here are some choice nuggets from a speech that should fill every American with rage, not just because of the climate denial on display but because of the total mockery that it makes of representative democracy.

He opens with some garden-variety climate denial: “Unlike some of my colleagues, I’m not immediately afraid of what carbon emissions unaddressed might do to our environment in the near-term future or our civilization or our planet in the next few years.”

Time for more misinformation, specifically about travelling without airplanes. Lee suggests looking to The Empire Strikes Back and cartoons for transportation inspiration: “How are we supposed to get around the vast expanses of, say, Alaska, during the winter? Well, I’ll tell you how: This is a beloved species of repto-mammals native to the ice planet of Hoth. … Not only are Tauntauns carbon neutral, but according to a report a long time ago and issues far, far away they may be fully recyclable and usable for their warmth especially on a cold night. What about Hawaii? … All residents of Hawaii would be left with is this. This is a picture of Aqua Man, a superhero from the undersea kingdom of Atlantis and notably here a founding member of the Super Friends. I draw your attention, Mr. President, to the 20-foot impressive sea horse he’s riding. Under the Green New Deal, this is probably Hawaii’s best bet.”

Even more bullshit, this time on the elimination of cows (also not called for under a proposed Green New Deal): “I visited different areas in Utah. Every cow I spoke to said the same thing: ‘Boo.’”

Back to climate denial, starring sharks: “Critics will no doubt chastise me for not taking climate change seriously, but please, Mr. President, nothing could be further from the truth. No Utahan needs to hear lectures of the gravity of climate change from politicians from other states for it was only in 2016, as viewers of the SyFy network will remember when climate change hit Utah, when our own state was struck not simply by a tornado, but a tornado with sharks in it. These images are from the indispensable documentary film Sharknado 4.”

Hark? Is this an actual alternative solution to climate change? “Mr. President, this is the real solution to climate change: babies. … It’s a challenge of creativity, ingenuity, and more of all technological innovation. And problems of human imagination are not solved by more laws, they are solved by more humans, more people, bigger markets for more innovation. … The courage needed to solve climate change is nothing compared with the courage needed to start a family.”

Let’s take Senator Lee seriously for a moment. How about more babies? Set aside the fact that a bumper crop of kids would likely make climate change worse. It would really be passing the problem to still-unborn geniuses that will do the work Lee is too cynical to do himself. I’d like to think that whether you’re a Republican, a Democrat, or an Independent, you’d feel like what Lee rose to say in the Senate chamber on Tuesday was not a masterclass in “owning the libs,” but instead was one of the clearest pieces of evidence that our government isn’t working for our benefit right now. It’s broken.

It’s not enough that Senate Majority Leader Mitch McConnell, Republican of Kentucky, is gleefully bringing up the non-binding resolution — an ambitious plan to tackle climate change and inequality that is just lacking, well, a plan — but his GOP colleagues are turning what’s supposed to be the country’s foremost deliberative body over to discussion of what is simply a mission statement. Surely they have actual legislation to debate rather than playing out this political stunt. (In contrast, New Zealand’s legislators swiftly made over the country’s gun laws days after a horrific mass shooting.)

Yes, Lee’s antics were laughable. But it’s a reflection of how unseriously he takes one of the greatest threats imaginable. Sit on that for a second and, regardless of how you feel about climate change, see if it doesn’t fill you with anger, anxiety, and anguish.