Young people around the globe are gearing up for the International Youth Climate Strike on Friday, March 15. Students at tens of thousands of schools are expected to leave their classes and take the streets to demand world leaders act on climate change.

Tomorrow we school strike for the climate in 1769 places in 112 countries around the world. And counting.

Everyone is welcome. Everyone is needed. Let’s change history. And let’s never stop for as long as it takes. #fridaysforfuture #schoolstrike4climate #climatestrike pic.twitter.com/xpCLQN8icv

Following last month’s massive youth walkouts in Europe, the March 15 Youth Climate Strike will now bring the school-based environmental action stateside. According to the U.S. website for the strike, the students’ demands include a Green New Deal that will prioritize communities most impacted by climate change, a 100 percent renewable energy target by 2030, and comprehensive education on the impacts of climate change.

“It’s important to talk about what climate change does to marginalized communities, and what it could do to your community,” said Isra Hirsi, one of the U.S. co-leaders of the walkout who also happens to be the 16-year-old daughter of Minnesota Congresswoman Ilhan Omar. “I think that’s a really great way to get more people involved.”

As united as Friday’s protests will be in their call for meaningful climate action, the reasons young people have for participating are also grounded in their regions’ unique climate concerns. Grist reached out to Youth Climate Strike organizers around the country to get a sense on why they’re participating and how climate change is impacting their communities.

The following quotes have been edited for clarity and length. 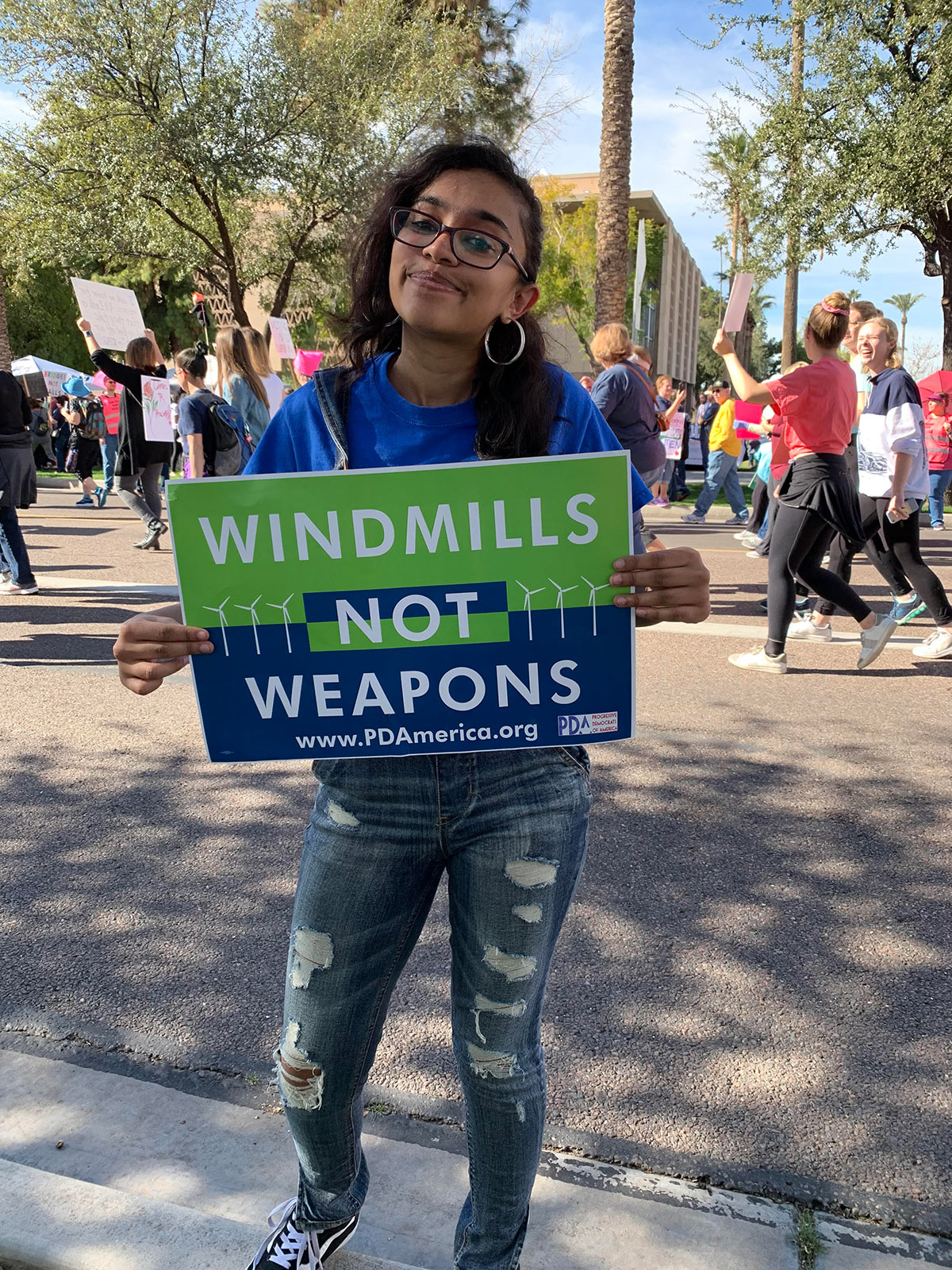 I have seen the impact of climate change on my community members, such as extreme heat and lack of trees in urban, more low-income, majority-POC areas in South Phoenix. Extreme heat, lack of water, the use of solar energy, and fracking are all huge issues on the Arizona state legislature’s plate right now.

Solar energy is one I care about most, as Arizona is so capable of using solar energy, but big energy companies are disincentivizing consumers from using solar, and in turn promoting fossil fuels. [Adults here] have had mixed responses, but, disregarding some not-so-nice online comments, most have been nothing but supportive.

Here in North Seattle, we definitely are more concerned about the issue compared to other parts of the country. But it’s kind of ironic — we have a fairly privileged perspective. Even though we emit the most greenhouse gases with our lifestyles, we’re not the ones who are most impacted compared to people living on islands that are going to flood or need to be relocated, or climate refugees. I feel like, even though — our community, even in Seattle, does care about the issue, the amount of caring doesn’t match the amount it’s talked about.

Climate change will be brought up in classes, of course, but outside of that, no — it’s weird, to me it’s such a pressing issue! Why isn’t everyone talking about it all the time? I don’t feel like it’s talked about that much. Not only at my school, but outside of that in the greater community either. 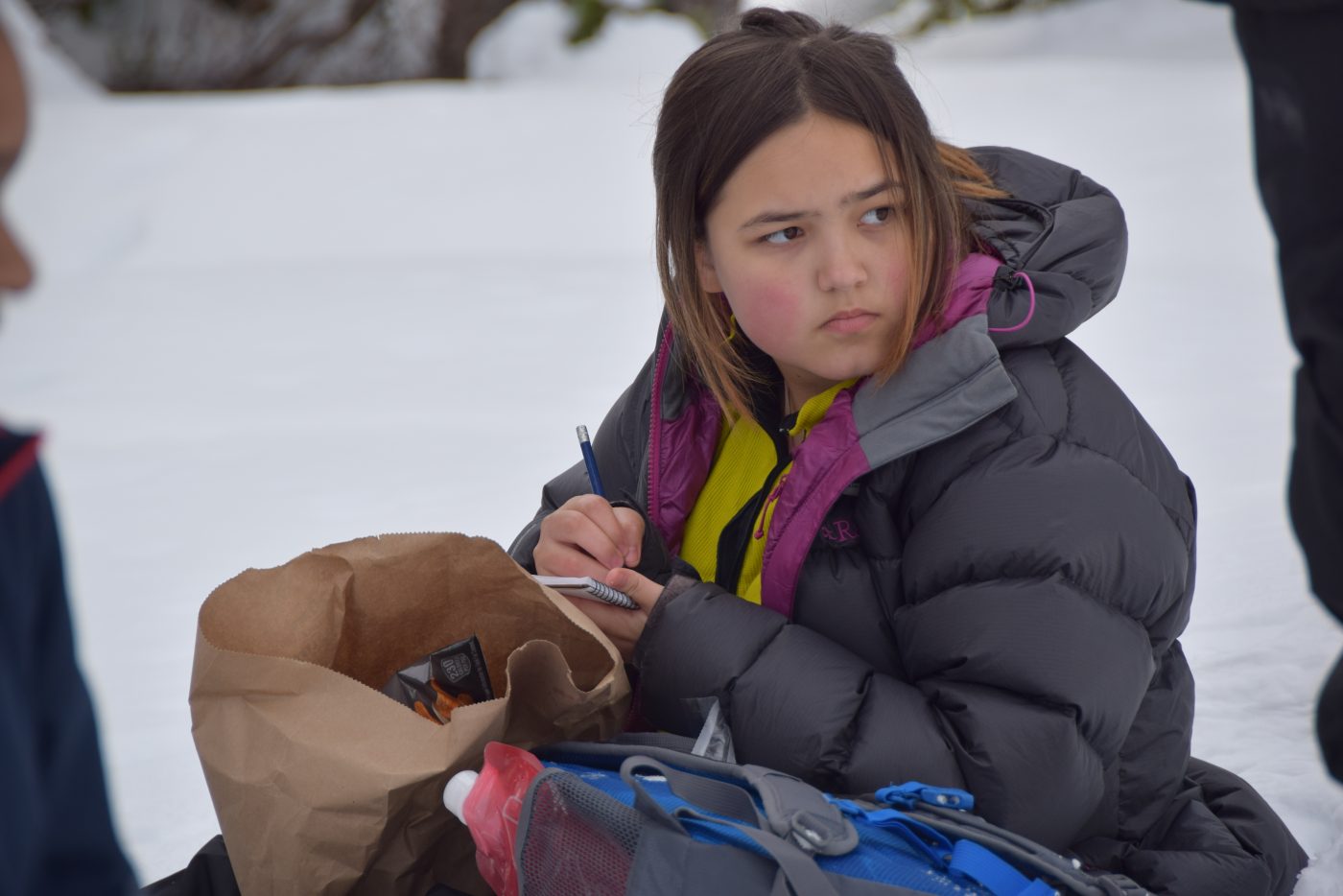 These past couple weeks have been spent going to a lot of club meetings, trying to spread the word [about the strike] at my school. I want the strike to be a diverse movement because marginalized people get left out of climate movement, so I’ve been going to the Black Student Union, the Human Rights Club, the Gay-Straight Alliance, and telling them about it.

For me, it’s not just me trying to protect my future, it’s trying to protect my [present]. I’ve been doing climate activism for five years. People in government and people who have power in society, they’re not taking the proper actions. I care about the environment and nature and I love the world around me but the biggest thing I care about is humans. I want us not only to be able to survive but to prosper. If we allow this to continue, that won’t be an option.

(Goldberg was one of the students who gathered to ask California Senator Dianne Feinstein to support the Green New Deal. She and the group will be marching from Speaker Nancy Pelosi’s office to Feinstein’s office. She says students plan to put sticky notes on either the politicians’ doors or the doors of the building.)

We were there with a small group of people on a Friday, and now we are coming back with thousands. I hope. 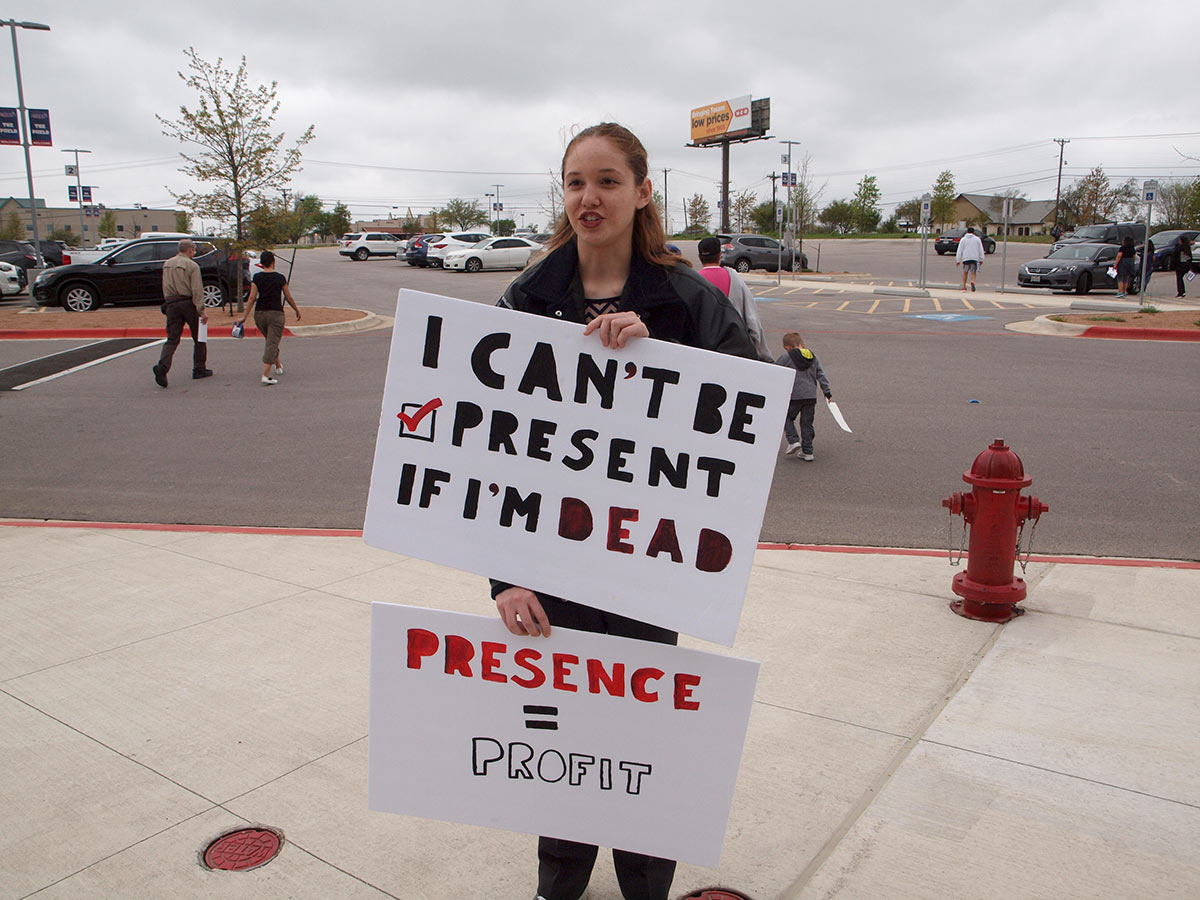 Texas summers have been getting progressively warmer every year for longer than my entire lifetime. It’s getting to the point where we’re breaking 110, 115 degrees F during the day. We’re going way too long without rain so everything is evaporating, but then it gets caught in the coastal winds because Texas has a significant coastline. It’s all being pushed away. So there are areas that are getting flooded and areas that have been in a drought for a decade.

Texas covers just about every major biome. We have Hill Country, coastal plains, forest, desert, marshland. Because of that [climatic] divide and [with half the state] getting too much rain and the other no rain at all, Texas faces the unique problem of not being able to make any direct action at the legislative level so far because when you tell the Eastern half we need to do something about the drought, they say, ‘What drought?’ And when you tell the Western half of the state, ‘Hey, we need to do something about the flooding, they say, ‘What flooding.’

For some students, leaving school for one day is a very taxing ask, so there are some concerns about unexcused absences during the walkout — although, that is what makes the event so powerful. This is a global movement encouraging young people to advocate for a safe future, so in perspective, many young people are eager to miss a day of school to participate. Portland Community College has been receptive to the idea, and local high schools have also been generally cooperative in allowing us to promote the strike.

It has been challenging to get this movement the momentum it deserves in the U.S. In other countries, it has really taken off. Considering the enormous role our country plays in climate change, the success of this event and future events involved with this movement is vital to the future of young generations. 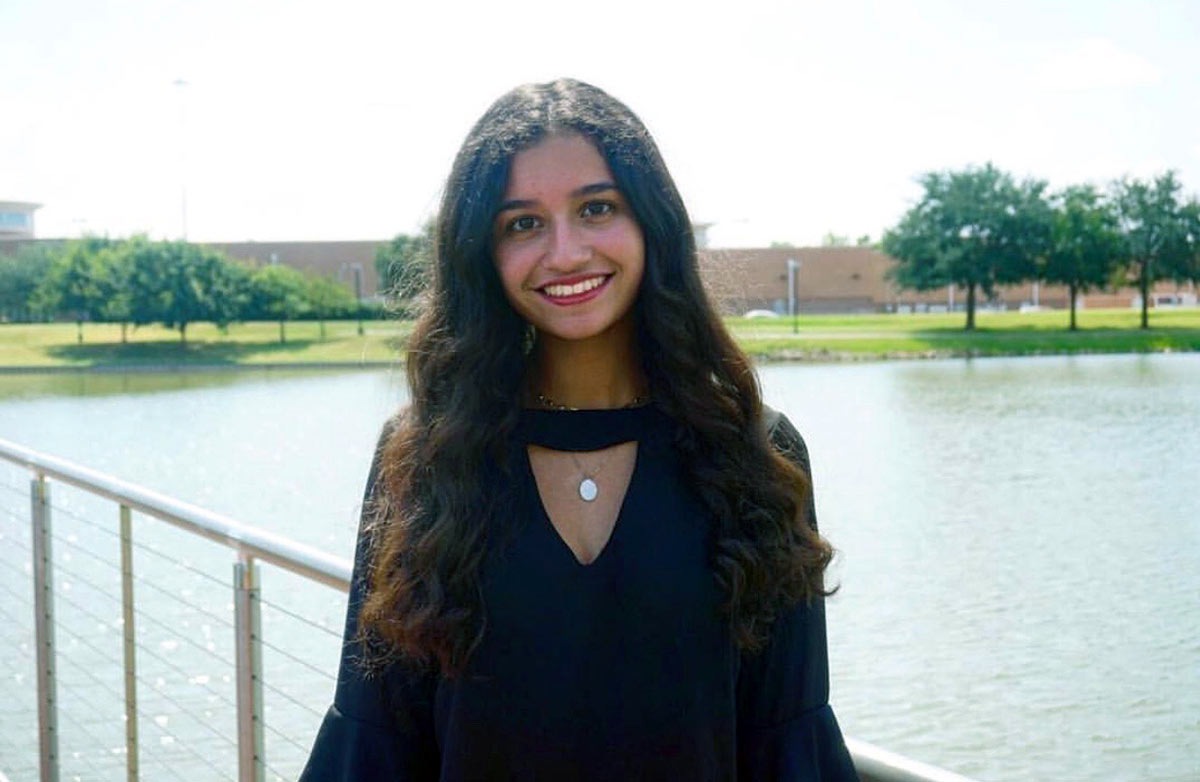 I live in Houston and recently, in 2017, Hurricane Harvey devastated our city. It was a time when my family and my friends were in a state of fear. It was terrible. This is truly why I’m striking. It’s why I’m organizing the strike. It’s something that affects me personally and we have the power to prevent and we should do something about it.

Climate very rarely comes up in the classroom. It’s come up on occasion. Ninety-nine percent of the research I’ve done on climate change, I’ve done on my own. The school system was very lacking. If schools were involved in teaching climate change then we wouldn’t have this doubt and we wouldn’t have this negligence we have today. That’s one of the biggest parts. Education is power.

With that being said, Texas is strong. We are all so very passionate. Especially because Texas has so much oil and gas, it’s important that we acknowledge this. We really believe that we can make this change as long as our voices are united in one single front. 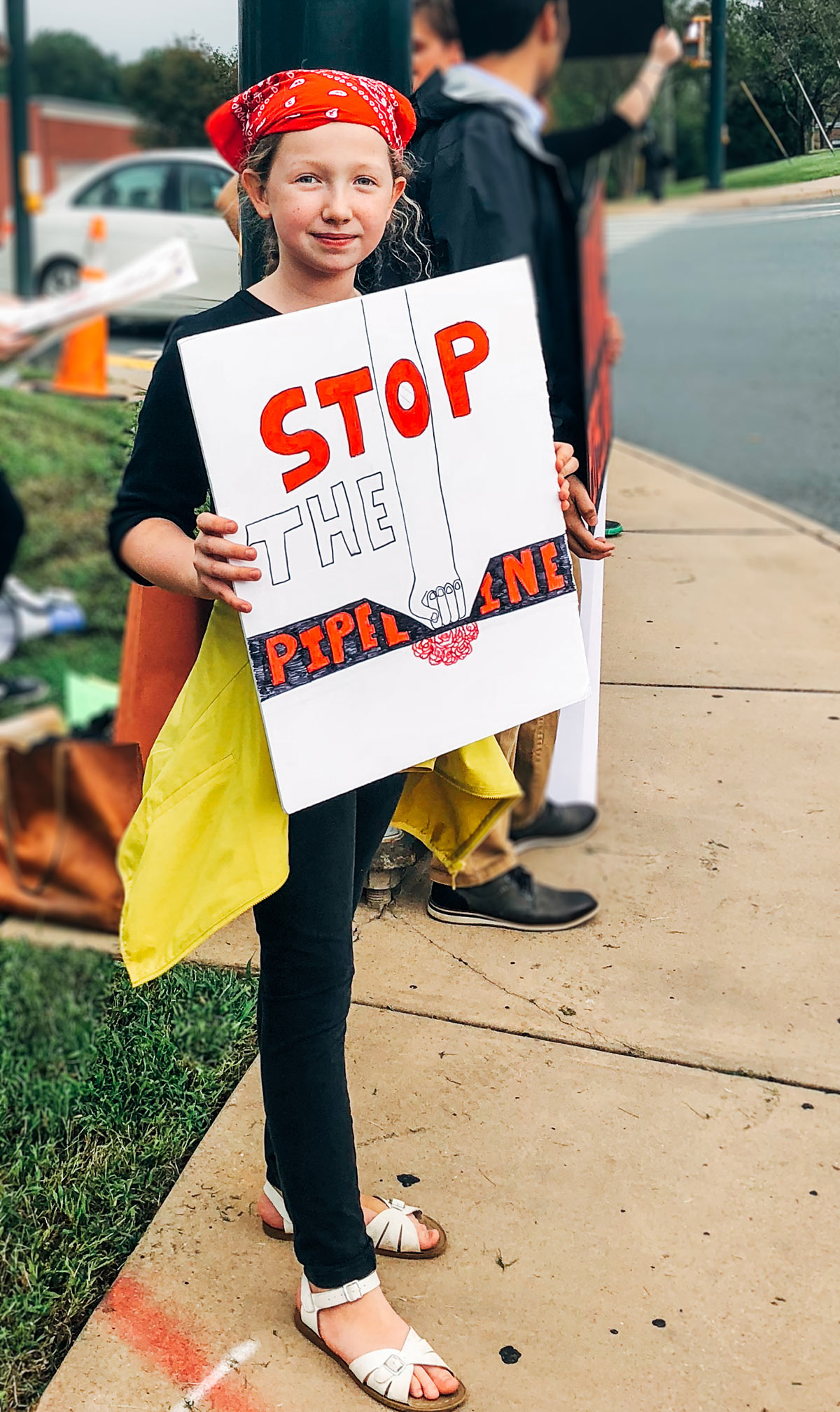 I’m choosing to participate because time is running out. We have 11 years to save our planet, and it’s the only planet we have. We cannot spend precious time, of which we have too little, in silence. We must fight for our futures if others will not.

My parents have been pretty supportive from the start. I think I first started getting into environmental activism when my teacher showed us a video of Greta Thunberg giving a speech. She told a room full of adults that they were acting like children. When I got home I showed the video to my parents, and a few weeks later, my mom showed me an article about Alexandria Villaseñor and the school strike, and I thought, ‘That’s what I want to do.’ 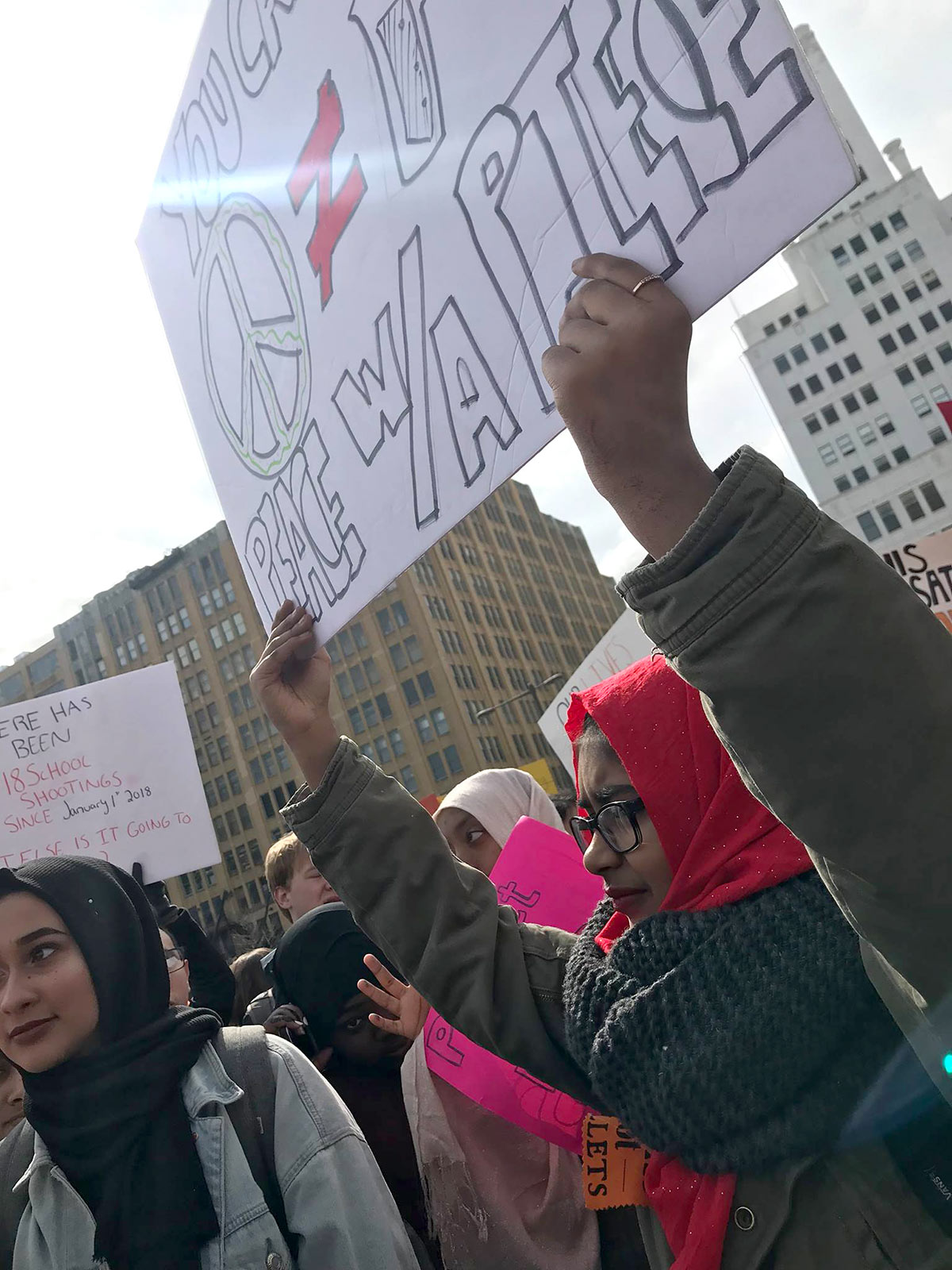 “It’s really important for every single student in America to have their voice heard. [There are] definitely barriers. People tell us that we can’t change climate change because we’re just kids. Of course, we know we can’t vote but we still have a voice. We still have the ability to stand up for something. We need to stand up for our right to protect our future, and I’m just baffled. It’s often very discouraging.

The strike isn’t just an opportunity to leave school or to walk out, it’s an opportunity to make change. All my life I’ve been asked, ‘What are you going to do in the future? What are you gonna do when you grow up?’ I can’t really think about the future with all this. It’s really ironic. That’s why it’s really important for this to happen, not only just Philadelphia but everywhere. Because we are the young people, the next generation and we need to take action now.” 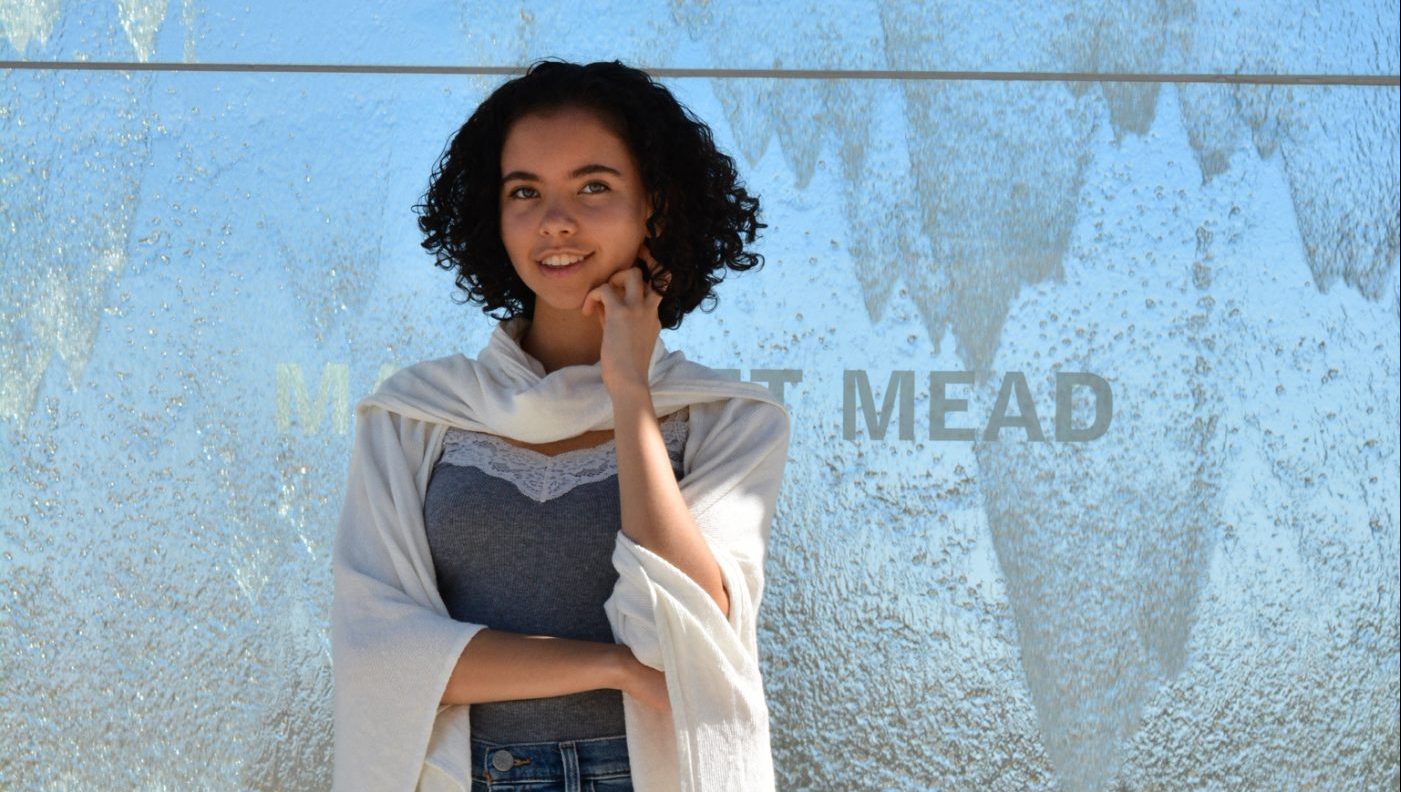 I’m really passionate about food and food justice and specifically how marginalized communities are impacted by food and food scarcity and food security (and lack of food security). Just thinking about farmers in Georgia and how they recently dealt with a drought last year and the year before with peaches and pecans. I just don’t know what that looks like long term for farmers and people that rely on that mode of work, being in the South, being in Georgia. I’m really passionate about a lot of the organic farms here and locally-owned farms. I prefer to get my food from farmers markets, and I’m worried about how they’ll be impacted if climate catastrophe is on the way.

The adults in my life have been supportive [of my striking]. My mom has been really supportive. We’re about to go to a talk at a church about the morality of climate change tonight. At my school, they’ve been incredibly supportive — one of my teachers actually introduced this movement to me. I’m the leader of our sustainability group, “The Green Team,” and they’re hosting their own strike during lunch. But I want to connect the whole city of Atlanta at the Capitol.