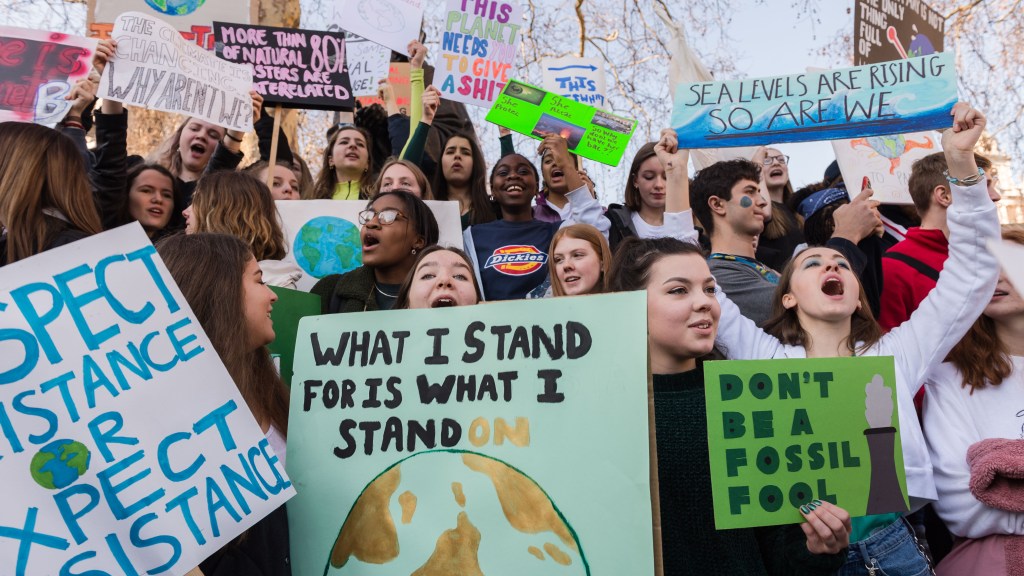 Thousands of youth strikers gather in Parliament Square in central London to protest the government's lack of action on climate change. Wiktor Szymanowicz / Barcroft Media via Getty Images
Keep calm and walk out

Thousands of young people in the U.K. are up in arms — not about Brexit, or the latest royal family gossip, but about climate change.

Students walked out of schools today in cities across the U.K., and other parts of Europe — the latest demonstration in what has become a global youth climate strike. This movement started six months ago when Swedish teen Greta Thunberg began leaving school every Friday to protest on the steps of her country’s parliament. Thunberg’s environmental activism is still going strong, and she has delivered powerful speeches to both the U.N. and the World Economic Forum on the urgency of climate change.

This is week 26 of her climate strike. But she’s no longer in it alone.

The schools must be empty! Over 800 kids out of class for the Brighon #ClimateStrike pic.twitter.com/5IDhQxOXpX

Thousands and thousands of young people just unexpectedly spilled onto the road in one of the largest youth protests against climate change in history. #Climatestrike pic.twitter.com/zVj5YZx8nh

These kids aren’t just hooting and hollering, either. The U.K. Student Climate Network, a group that helped coordinate some of the biggest protests in London, Brighton, Oxford, and Exeter, has four very specific demands.

They want leaders in government to:

The #ClimateStrike is absolutely incredible: young people have shut down the roads around Parliament, in the proud tradition of direct action – and they are determined to bring down this whole rotten system ✊🏻👏🏻 pic.twitter.com/GVUhdBw3xq

British PM says that the children on school strike are “wasting lesson time”. That may well be the case. But then again, political leaders have wasted 30 yrs of inaction. And
that is slightly worse.#schoolstrike4climate #FridaysForFuture #ClimateStrike https://t.co/PoSCXin3VN

The young protestors were keen to apply their Gen Z wit to the climate cause, with slogans like: “I’ve seen smarter cabinets at Ikea,” “Make Earth cool again,” “Like the oceans we rise,” “Nobody minds if you miss school on a dead planet,” and the straightforward “Don’t f*ck us over.” Sometimes simplicity wins.

Don’t worry if you’re feeling left out in the U.S. The climate strike is spreading stateside as well, with a major national action planned for Friday, March 15. And some young American activists, like Alexandria Villasenor, have already been at it for weeks.

WEEK 10 of my @UN #ClimateStrike in NYC. Today I strike in solidarity with thousands of UK students & https://t.co/lSbWPBP04e! We go global March 15th because "Change is coming whether you like it or not!" @GretaThunberg #SchoolStrike4Climate @350 @HillaryClinton @nytclimate @AOC pic.twitter.com/Gee75RosZX

Next month’s climate march is expected to galvanize not only students from around the globe, but also major environmental groups like 350.org, Extinction Rebellion, and the Sunrise Movement.

If one teen can spark a movement this size, we’d better be keeping an eye on all these youngsters. Who’s telling what they might do next — save the world, maybe?