How one school is getting kids fired up about climate solutions 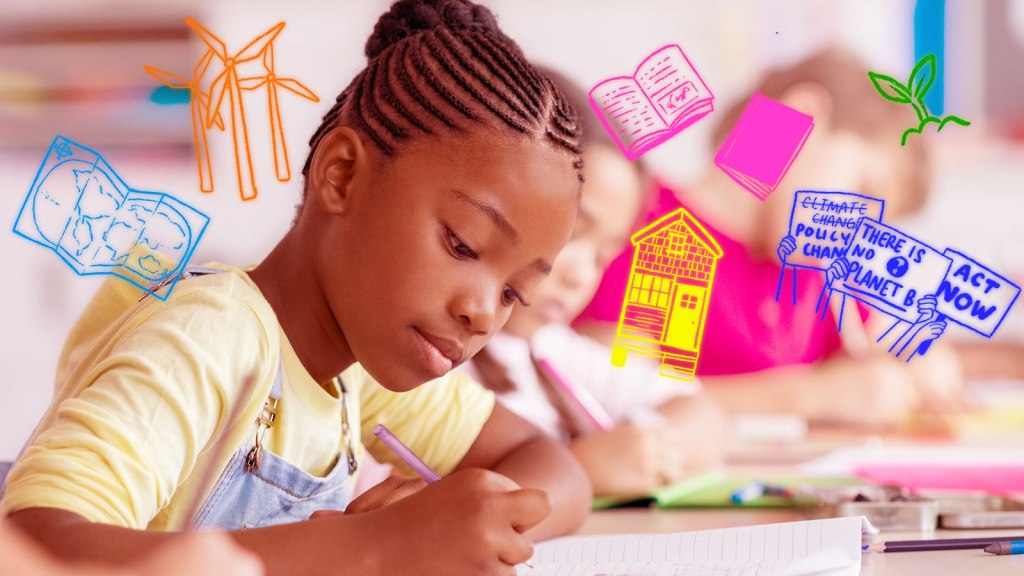 How one school is getting kids fired up about climate solutions

It’s a daunting task, keeping a bunch of 12-year-olds interested in something for an entire school year. The cutest, whiniest boy bands barely manage it.

After all, middle schoolers have so much to think about — how to get their parents to drop them off a full five blocks from the movie theater, whether their older sister will kill them for stealing and subsequently ruining her favorite sweater, the fact that our warming planet may be uninhabitable for them and their future children if we don’t act fast…

At least, that’s the conclusion Natalie Stapert came to. As the middle school humanities coordinator for Lowell School in Washington, D.C., she was tasked with coming up with a 6th-grade humanities curriculum that could bear the sisyphean burden of capturing tweens’ attention while meeting the school’s learning goals in literature, politics, and geography.

Stapert knew she had to build the curriculum around one big topic. She knew it had to help the kids meet goals like learning to interpret a map and understand an author’s purpose. She knew her audience was tough, but remarkably capable, given the chance to show it.

“The question that we found most compelling was climate change,” Stapert says.

She was treading in new territory. Climate change has long been relegated to science classrooms — there was little precedent for teaching it in the humanities at all, let alone designing a year-long curriculum around it. And the subject would be brand new for teachers, too.

But it was a match made in heaven for Climate Generation, a nonprofit that provides resources for educators who want to incorporate climate change into their classrooms. The organization had hoped to find a school interested in teaching the subject more holistically, and collaborated with Lowell to train teachers and work out the details of the course.

The results, monitored by the school and by outside researchers, have been remarkable. Students’ reading scores have gone up — a sign that they’re interested in the subject matter. And interestingly, the work in the humanities has also helped kids understand the science behind climate change — and engage them in the search for solutions.

“The fact that we leave climate discussions primarily to the natural sciences is itself part of the problem,” says Jennifer Atkinson, a researcher and senior lecturer who studies environmental humanities at the University of Washington, Bothell. “This is a cultural issue, it’s a political and economic issue. For many people it’s a religious issue. We need all of those methods to adequately address this.”

Lowell kids don’t just learn about renewable energy from a science perspective — they learn to analyze maps of natural resources like sunlight, wind, and coal to determine how geography influences energy production. They don’t just learn about the carbon footprint of solar power — they learn about the political systems that stand to support it or stop it, role-playing world leaders trying to find a way to cap warming at 2 degrees Celsius while keeping their nations’ interests in mind.

Literature has a place in the curriculum, too. Kids at Lowell read books like Julia Bertania’s Exodus, a novel about a 15-year-old who becomes a climate refugee when her island is flooded by rising seas. Her story leads into discussion questions like “What do we owe to our planet?” and “What do we owe to future generations?” (If any of you have a time machine, go back a few decades and teach this unit to some members of Congress, would ya?)

“What are the things we really need to solve this problem? Empathy, persistence — things you get when you read,” says Kristen Poppleton, director of programs for Climate Generation.

Of course, the kids learn about climate science, too — they sort of have to. An overnight field trip to understand how sea level rise is affecting residents of nearby Tangier Island would be confusing if you didn’t understand why the sea was rising in the first place (not to mention that Tangier is a special circumstance, its land simultaneously sinking and eroding as the water comes up). It’d be tough to defend solar energy in front of a room of your peers if you were clueless about fossil fuels and carbon emissions.

Some of that comes from their science teachers. But the work Lowell students do in the humanities helps their understanding of the science, too. Laney Siegner, a graduate student at the University of California, Berkeley, tested the students’ general climate knowledge and found that 6th graders who’d been through the program scored just half a percentage point below Lowell’s 8th graders, who study a more traditional, 12-week climate change curriculum in their science classroom. (Both fared significantly better than students who had taken neither course.)

“I originally thought that greenhouse gases actually had something to do with a greenhouse,” says Abigail Stark, who just finished up 6th grade at Lowell. “But, it turns out, that’s more of a metaphor.” (I don’t think I even knew what a metaphor was in 6th grade. You go, Abigail.)

If there was a risk to the new curriculum, it was that students would get totally bummed out by the awful realities of our home planet burning up. After all, emotional, human stories work far better than facts and figures when it comes to convincing people to care about climate change. Don’t middle schoolers already have enough to worry about, what with the after-school dances and brand-new armpit hairs?

“We were very invested in the children’s emotional and psychological needs as they were studying,” Stapert says. “Kids really benefit when there are action steps attached to their learning.”

That’s why the curriculum is so solutions-based, says Dave Levy, who teaches the 6th-grade humanities course. Lowell students learn about real-life changemakers, like 16-year-old Swedish climate activist Greta Thunberg. They hear from local people navigating life in super-efficient tiny homes and consultants working in the solar industry. They learn about actions they can take to make a difference in their own communities, and come to envision themselves as changemakers.

“At the beginning, we started hearing about all the bad stuff that was happening. I kept thinking, ‘When is all of this bad stuff going to end?’ It’s kind of depressing,” says Stark, the soon-to-be 7th grader. “But then I remember all the good stuff people are doing.”

The kids, too, are doing good stuff — and one thing in particular: Another survey of Lowell students found that 6th graders were more than twice as likely as 7th or 8th graders to spend time outside the classroom researching climate change and talking about it with friends and family. That’s extra cool when you consider just how effective kids that age are at swaying their parents’ opinions on the topic.

How applicable are Lowell’s lessons to other schools? That’s tricky. Teaching standards vary among school districts, with some mandating specific lesson plans, others basically letting teachers go hog wild, and some states still trying to prevent climate change from being taught at all. Plus, some of the field trips that Lowell students take, like visiting Congress and taking an overnight trip to a nearby island, seem pretty exclusive to a private school in D.C.

But Poppleton says most humanities educators can weave climate change into their classrooms in one way or another — switch a book out here (Climate Generation has free curriculum for that), add in the World Climate Simulation there. Lowell School and Climate Generation now provide climate education teacher trainings, with special outreach and scholarships for humanities teachers looking to cover climate change in their classrooms.

It’s worth a try. Just think about whatever held your interest in middle school — skateboarding, the Jonas Brothers, shotgunning Monsters in the parking lot. Now, imagine all that energy funneled into doing something about climate change.

At the very least, these middle schoolers will do what they do best — shame us into action.

“It’s not easy to acknowledge that my world is burning slowly down around me, and step up and take action,” Stark says. “I don’t want to deal with a mess that someone else made — but we’ve seen these effects for a while. My generation is going to inherit a world that’s pretty messed up.”