On a Friday afternoon in New York’s Washington Square Park, 17-year-olds Alysa Chen and Johanna Neggie paint signs for an upcoming climate march and discuss their career prospects. Senior year is quickly approaching — so are the impending dangers of climate change.

Sitting on the grass with paintbrushes and stencils in hand, the teens muse over which career path will be the most effective in solving climate change. Neggie is interested in public policy, but watching the Trump administration roll back key environmental protections has been discouraging. Plus, she says she hasn’t found any YouTube videos of what “a day in the life” of public policy would look like.

“Young people aren’t just talking about climate change,” says Chen, who’s considering becoming an environmental attorney. “We’re entering the workforce.” Today’s youth, she continues, are going to build things that can suck carbon out of the air. They’re filing lawsuits. They’re going to vote. They’re marching to Washington. And in Chen’s case, they’re helping to design a climate museum curated in part by and for young people. 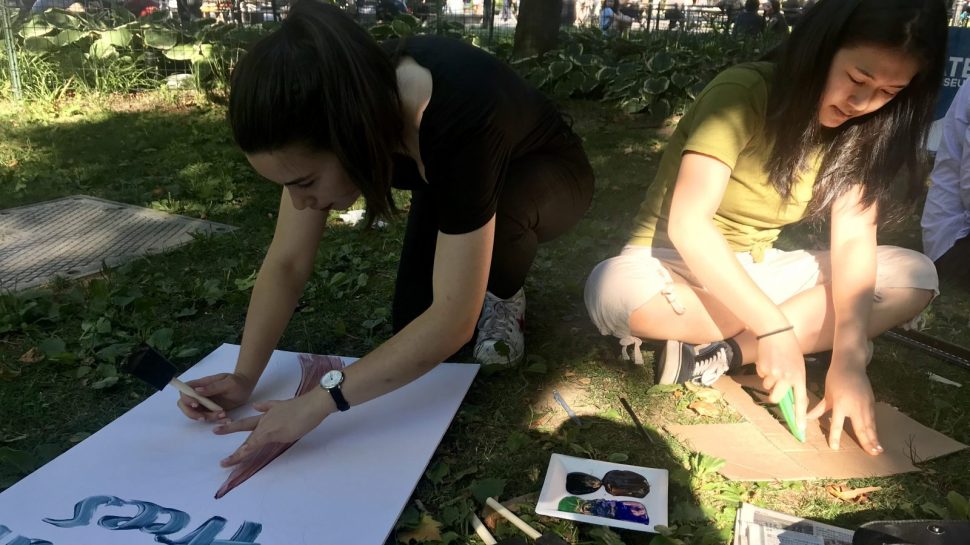 Johanna Neggie (left) paints a poster that reads, “Save the Trees.” Alysa Chen cuts out a stencil that says, “This is Zero Hour.”

Chen sits on the Youth Advisory Council for New York’s Climate Museum. The council coordinated the museum’s participation in last weekend’s Zero Hour march, a climate protest led in cities across the nation by youth of color. Chen’s advisory council is involved in visioning how the forthcoming Climate Museum in New York — the first of its kind in North America — will engage her generation in what they see as the biggest battle of their lifetime.

Climate Museum Executive Director Miranda Massie left her job as an attorney to found the museum in 2014. Massie says that from the start, “We always knew that young people are a huge part of this equation.”

The museum, which is holding pop-up programming until it lands a permanent space, is offering much more than science and art on display. It’s hitting the streets, bringing science experiments to kids at local events and joining this year’s Zero Hour march — all with the hope of catalyzing a change.

Last fall, the museum began its public programming with a multimedia exhibit on ice cores. In January, the museum hosted a workshop for youth to tour the exhibit and then create their own media that would merge science and art and bring young voices to the climate conversation.

At the workshop, students from high schools across New York City wrote and performed spoken word, designed subway ads, and created plans for a climate-themed music festival. Museum staffers were blown away by what the youth were able to accomplish and decided to form a Youth Advisory Council on the spot. They asked the workshop participants if they’d like to be the founding members and nearly all accepted. Today, there are 21 members aged 14 to 19.

Olivia Chiossone, another 17-year-old on the council, attends La Guardia High School. Both Chen and Chiossone helped organize the museum’s Zero Hour delegation with the hopes that it would catch lawmakers’ attention and lead to better policy on the environment.

Chen and other council members decided to join the local march rather than travel to D.C. — it would be easier for students to get parents’ permission to join, they thought, and they tasked themselves to each recruit 10 others to join the museum’s delegation.

Chiossone recruited her parents to join her at the march. Her mom, Gabrielle Kahn-Chiossone, owns an organic baby clothing company and says she raised Olivia to think about why they eat organic foods. “I’ve been trying to teach the kids from when they were little, why we eat this way, why we should care,” Kahn-Chiossone says. “I’m glad to see it’s taken effect.”

Anya Martinez, 17, is an incoming senior at Harlem Village Academy High School. “I really love activism,” she says. “I’ve been doing activism since ninth grade. My mom was my main inspiration.” 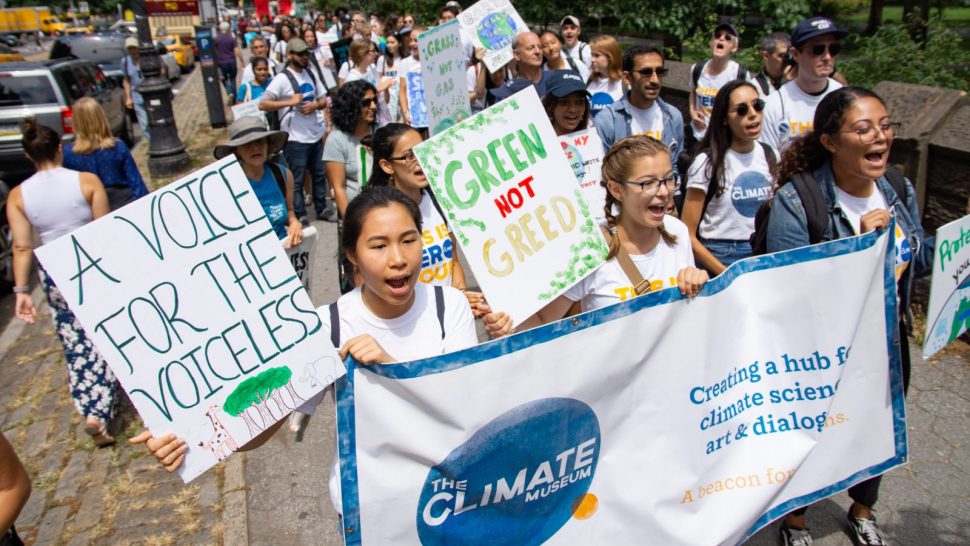 Martinez’s activism from a young age — and there were many at the Zero Hour march who were much younger than Martinez — is indicative of a culture shift that’s pushing even museums to take action. “There’s a wave of focus on civic engagement that museums are engaged in,” Massie says. “With the attack on civil society that we’re seeing now in the U.S., museums are stepping up in a new way.”

The Natural History Museum opened its first permanent exhibit on climate change this summer, which was lauded for helping modernize the museum with huge screens kept up-to-date with the latest climate science. But when I visited the museum, a security guard gently asked children at the exhibit to “don’t touch the screens, please.” It’s literally out of touch with today’s kids, who are growing up in a button-less world. Even white boards at some New York City high schools are touch screens.

With help from Chen, Chiossone, and Martinez, the climate museum will feel much different than any other museum in New York — one where youth are helping create the art and science on display.