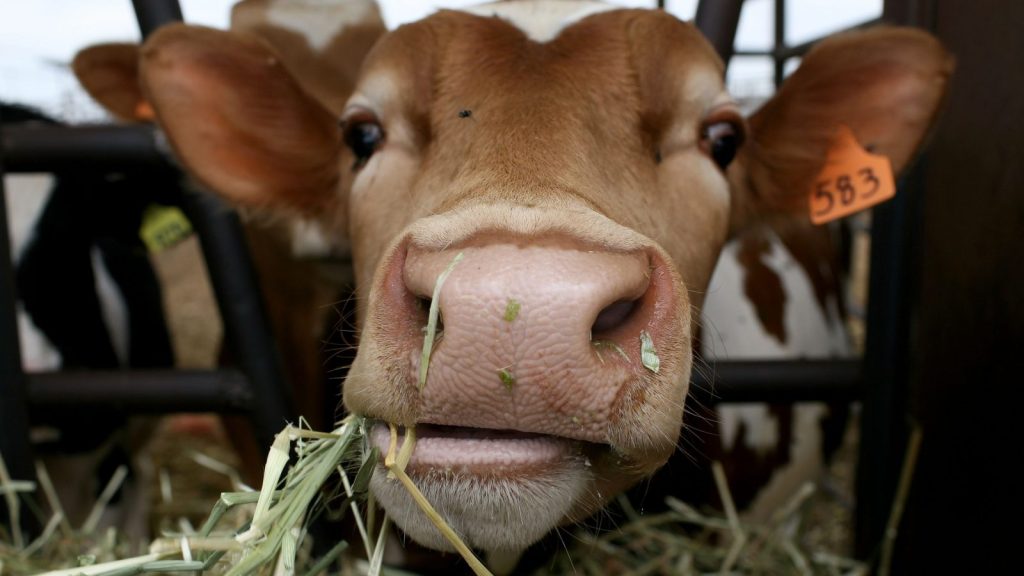 Justin Sullivan / Staff / Getty Images
kelp is on the way

One day in January 2014, police rushed to a farm in Rasdorf, Germany, after flames burst from a barn. They soon discovered that static electricity had caused entrapped methane from the flatulence and manure of 90 dairy cows to explode.

Headline writers had a field day. But the incident pointed to a serious problem: Ruminant livestock, mostly cattle, account for 30 percent of all global methane emissions, pumping out 3 gigatons of the gas every year in their burps, farts, and manure. Methane is an especially potent greenhouse gas: During its 12-year lifespan after being released, it traps 84 times as much heat as carbon dioxide, and its effect on global warming over a century is 34 times that of CO2. According to the United Nations, reducing methane emissions from cows could be one of the quickest ways to slow climate change.

The United States government has done little to curb this potent pollution, which makes up 36 percent of the country’s methane emissions. The Environmental Protection Agency’s AgStar program trains farmers to turn animal waste into biofuel using anaerobic digesters, but it is optional — 8,000 farms could implement it, but only about 250 have done so.

Ermias Kebreab, an animal science professor at the University of California–Davis, has spent 15 years studying alternative ways to reduce livestock effusions. Three years ago, he heard that researchers at Australia’s James Cook University had mixed bacteria from cows’ digestive systems with red seaweed and discovered a drastic decrease in methane production. Their lab experiment suggested that reformulating a cow’s diet to contain 2 percent seaweed could reduce its methane emissions by 99 percent.

Kebreab tried to replicate those results with actual animals. His team mixed varying levels of Asparagopsis armata, a type of red seaweed, into the feed of 12 dairy cows over a two-month period. The results were shocking: When the cattle’s chow consisted of just 1 percent seaweed, their methane emissions went down 60 percent. “In all the years that I’ve worked in this area, I’ve never seen anything that reduced it that much,” Kebreab says.

These are preliminary results, but they offer exciting prospects. Seaweed doesn’t require precious freshwater, fertilizer, or land to grow. It can reverse ocean acidification by absorbing carbon dioxide. We’d have to grow quite a bit of seaweed to rely on it for sequestration: One study suggests we could remove the equivalent of 42 percent of all current global CO2 emissions by covering 4 percent of the world’s oceans in seaweed farms — but that’s a lot of ocean.

And as a review published by the U.N. Food and Agriculture Organization notes, if aquaculturists remove rocks or native sea grasses to plant massive seaweed farms, they could disrupt ecosystems and even alter coastal currents. But responsible seaweed cultivation could be a boon to marine habitats, providing nurseries for fish and snails, argues Paul Dobbins, a senior specialist at the World Wildlife Fund and former president of a kelp farm in Maine.

The need to rein in methane emissions is especially urgent in Cali­fornia, home to 1.8 million dairy cows. A 2016 law requires the state air resources board to implement a strategy to reduce these emissions by 40 percent from 2013 levels by 2030. In hopes of helping farmers meet those goals, Kebreab and his team launched a larger version of his cow study in March, using 21 steers that he monitored for six months. So far, the results mirror the first experiment’s, but a full analysis won’t be ready until December. Kebreab’s biggest hurdle has been finding enough seaweed; the variety that’s useful for cows isn’t domestically available.

Massachusetts-based Australis Aquaculture hopes to cultivate red Asparagopsis on ropes anchored off the coast of Vietnam. CEO Josh Goldman is excited about feeding his underwater crop to cows: “You don’t have to rebuild 10,000 power plants in the world. You basically create a modest feed additive that has a big leverage effect.”

WWF’s Dobbins says seaweed farming can be a “triple win”: a way to grow nutritious food for both cows and people, provide coastal jobs, and improve the marine environment. “Everything you do in food production has pluses and minuses relative to the environment,” he says. “Seaweed farming, if done correctly, actually comes out more on the plus side.”