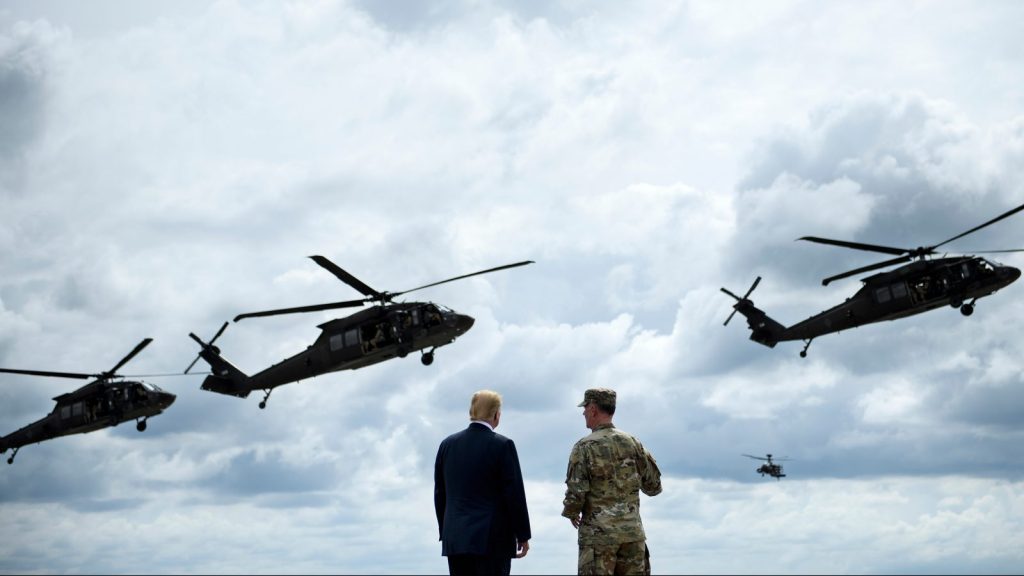 The Department of Defense may be one of the only parts of the Trump administration that openly admits that climate change is a threat. On Monday, President Trump signed the National Defense Authorization Act, which authorizes $717 billion in spending and advises the military to prep for climate-related flooding and sea-level rise. The nearly trillion-dollar package will be spent on “the finest planes, and ships, and tanks, and missiles anywhere on Earth,” Trump said from Fort Drum in upstate New York.

Problem is: This same federal agency, which is actively planning for global warming, is getting new toys that are capable of emitting tons of carbon.

CNBC outlined some of the big-ticket items in the DoD’s goodie bag. They include: $7.6 billion for 77 F-35 Joint Strike Fighters, $85 million for 72 Black Hawk utility helicopters, and $1.56 billion for three coastal combat ships (the Navy had only requested one).

A single F-35 fighter has an internal fuel capacity of nearly 18,498 pounds. If each of the 77 fighter jets uses up just one tank, that would amount to more than 1.4 million pounds of fuel. A Black Hawk helicopter has a 360-gallon fuel tank, and the combat ships each can lug nearly 150,000 gallons.

Although it’s been difficult to get hard numbers on the DoD’s total carbon footprint, it’s largely accepted that the U.S. military is likely the single biggest energy consumer in the world. The department said that it sent out more than 70 million metric tons of carbon dioxide in 2014 — roughly the amount of C02 the entire country of Romania produced that year — but that number excludes hundreds of overseas bases, vehicles, and anything classified as a national security interest.

Basav Sen, climate justice project director at the Washington, D.C.-based Institute for Policy Studies, pointed to another climate threat: The White House, even before President Trump, has made securing access to oil and gas a national security imperative. And indeed, the U.S.’s latest security strategy outlines “energy dominance” as a key priority — which includes protecting global energy infrastructure from “cyber and physical threats.” He points to the Iraq War as a recent example of the U.S. intervening in an oil-producing region with the intent of securing the crude supply.

“When you’re pumping money into the military, you’re not just pumping money into an institution that burns a lot of fossil fuels and emits a lot of greenhouse gases,” Sen says, adding that funds also go to providing armed protection to the fossil fuel industry under the guise of national security. “That is really, really disturbing.”