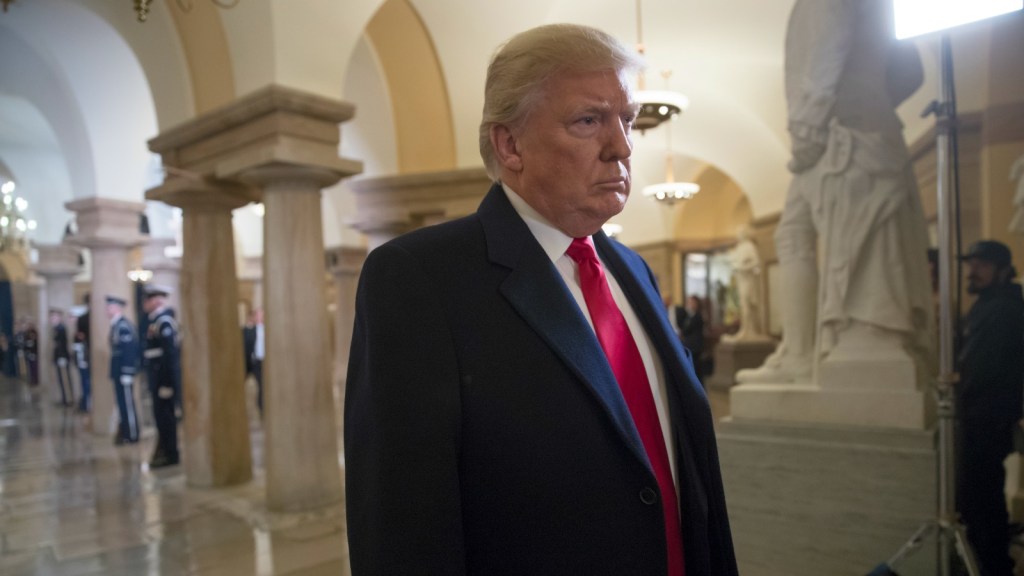 On Tuesday, President Donald Trump visited the Environmental Protection Agency, where he signed an executive order dismantling key Obama-era policies aimed at fighting climate change. On Thursday morning, the EPA sent out a press release highlighting some wonderful praise that Trump’s order has received from groups such as the Chamber of Commerce, the American Petroleum Institute, the American Coalition for Clean Coal Electricity, and — of course — Republican politicians. But the top quote in the EPA’s email, attributed to Sen. Shelley Moore Capito (R-W.Va.), had an unexpected message:

With this Executive Order, President Trump has chosen to recklessly bury his head in the sand. Walking away from the Clean Power Plan and other climate initiatives, including critical resiliency projects is not just irresponsible — it’s irrational. Today’s executive order calls into question America’s credibility and our commitment to tackling the greatest environmental challenge of our lifetime. With the world watching, President Trump and Administrator Pruitt have chosen to shirk our responsibility, disregard clear science, and undo the significant progress our country has made to ensure we leave a better, more sustainable planet for generations to come.

This is obviously not the glowing review Trump was hoping to get from a coal-state Republican senator. Alas, it appears that someone at the EPA screwed up. That statement actually comes from a Democrat, Sen. Tom Carper (Del.) — not from Capito. If the EPA press release continued to quote from Carper, this would have been the next line:

This order clearly proves that this administration is not serious about protecting jobs and our environment. As a West Virginia native, I understand the plight of coal miners in today’s day and age. But the Clean Power Plan isn’t the coal industry’s problem — market forces are. Let’s be perfectly clear: This executive order will not bring back the coal industry. It is an insult to the men and women who voted for him for Donald Trump to say otherwise.

Trump recognized Capito, the West Virginia senator, multiple times in his speech at the EPA on Tuesday. He also declared that coal is clean. At the same event, Interior Secretary Ryan Zinke declared the so-called “war on coal” to be over.

The EPA has now sent out a revised version of the press release, correctly quoting Capito’s praise of Trump’s order. And this time, the agency even spelled her name correctly.

An EPA spokesperson said in an email, “An internal draft was mistakenly sent with a quote that belonged to Senator Carper but was wrongly attributed to Senator Capito, whom we originally meant to quote. We apologize for the error and are making sure that our process is improved as we build our team.”

I also reached out to some environmental groups and Carper’s office over email for comment.

“Senator Carper is happy to lend his words to a good cause,” the senator’s spokesperson said.

“MWAHAHAH,” 350.org’s communications director, Jamie Henn, began. “The Trump Administration’s actions are so outrageous and counter-intuitive that even they can’t keep up with the lies that they’re spinning out to the public. For once, Capito sounds like she’s right on: These executive orders are reckless, irrational, and wildly damaging.”