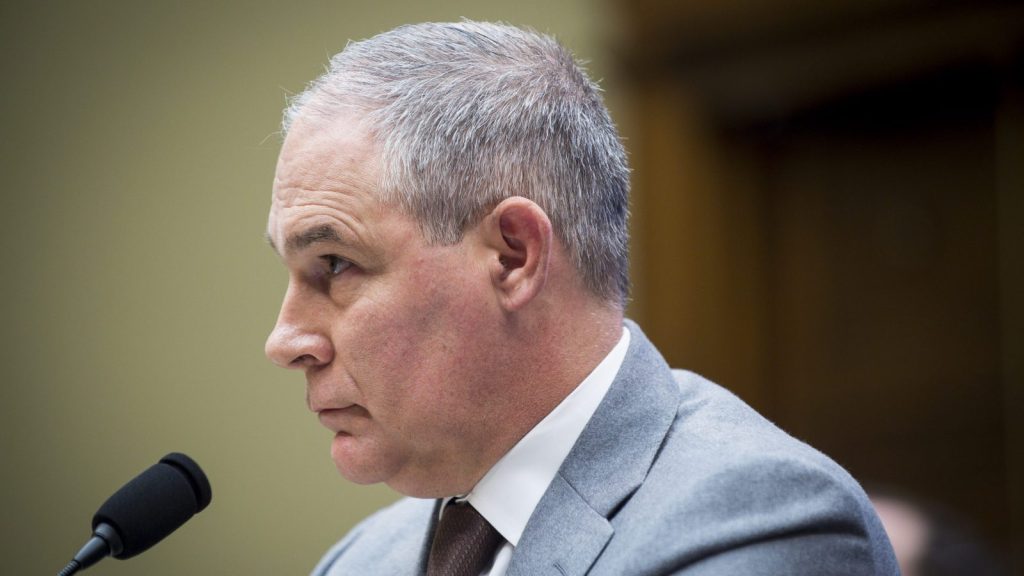 A coalition of 10 progressive and environmental groups are launching a campaign Wednesday saying President Donald Trump’s EPA Administrator Scott Pruitt needs to go. The campaign, which is spearheaded by the Sierra Club, the Natural Resources Defense Council, Green Latinos, Defend Our Future, Hip Hop Caucus, and others, includes many of the groups that have been out front protesting Pruitt and the Trump administration. Now they will collectively target Pruitt by launching ads, a petition, a website (BootPruitt.com), op-eds, and other actions, as part of the first coordinated effort to oust the administrator since he was confirmed by the Senate more than a year ago.

The groups backing the campaign to “boot Pruitt” argue there is more than enough evidence to prove Pruitt is unfit for his job. Their online petition, to be delivered to the EPA and White House, outlines the complaints: “It’s clear where your priorities lie, Administrator Pruitt — with polluters and your political benefactors, not American families. For your numerous ethical breaches, alarming dirty dealings with polluters and the irreparable damage that you’ve done to our health and environment, you must resign immediately.”

Pruitt has faced a growing list of controversies. He arrived having sued the agency a record 14 times and spent his first year targeting dozens of air, water, and climate regulations. Once in office, he marginalized staff experts, spent tens of thousands of dollars on first-class travel, and appointed industry allies and Oklahoma friends to top EPA posts.

“It was very obvious to many of the environmental groups and progressive groups at the very beginning that Administrator Pruitt was not going to have environmental health and public health concerns in mind when he serves as administrator,” says former managing director of the White House Council of Environmental Quality Christy Goldfuss, who is vice president for energy policy at the liberal think tank Center for American Progress, which is involved in the campaign. “What was not clear last year was just how flagrantly he would violate ethical standards and breach the public trust. We have reached the tipping point and it is clear that Administrator Pruitt is unfit to serve in public office.”

The “boot Pruitt” campaign will include digital ads in Oklahoma and ad buys on the president’s favorite network. The aim is to galvanize more opposition to Pruitt’s approach to the EPA, which has already expanded beyond progressive groups. Pruitt recently attracted criticism from congressional Republicans and conservative media, and he received a reminder from the White House on ethical practices with regards to his spending habits.

Pruitt tends to be mentioned in the same breath as other cabinet members who’ve gone overboard on using taxpayer dollars for personal indulgences, including Housing Secretary Ben Carson and Interior Secretary Ryan Zinke. For the groups backing the campaign, Pruitt stands out for the breadth of actions he’s taken to undermine environmental safety.

“When you see people who are struggling with clean water, it’s really just hard to fathom we have somebody in charge of the EPA who pushes for the polluters at the expense of our community, at the expense of our environment, and our health,” says Reverend Lennox Yearwood, Jr., president of the Hip Hop Caucus, a progressive advocacy group involved in the effort.

Only Trump can remove Pruitt from the position, which right now seems unlikely, despite recent shakeups in the cabinet. But the Sierra Club hopes to catch the president’s attention by buying ads on his favorite shows Fox & Friends and Morning Joe calling for Pruitt to go.

“This is a campaign that will continue until Administrator Pruitt decides to return to Oklahoma on his own or the White House asks him to,” Goldfuss says.