It’s no secret that scientists often struggle to explain their research in the most approachable way. Beakers, lab coats, and thermal cyclers broadcast “competent,” but not exactly warm and relatable. Plenty of scientists have upended this stereotype — thanks, Bill Nye — but for some, communicating is like, um, rocket science.

A recent report makes the case that collaborating with people who consider themselves artists — musicians, actors, wordsmiths — could help them out. For issues as broad as climate change, the thinking goes, these creative folks could take academic findings and translate them for people who don’t speak the language of facts and numbers fluently. Take the brainy ideas and make them visual and visceral in the way that art can.

It’s already happening in the world of education, where there’s a push to expand the well-funded focus on science, technology, engineering, and math, or STEM, to include art. Add the A and you get STEAM. The idea is that people would have a better shot at solving complex problems by combining the head and the heart. It’s no coincidence that successful Nobel laureates are more likely than other scientists to partake in art and other creative activities.

“Art should not be an afterthought,” said Christine O’Connell, who received a doctorate in marine and atmospheric sciences and recently worked at the Alan Alda Center for Communicating Science at Stony Brook University. “By incorporating the ‘A’ in STEAM you’re giving truth to that. It should be part of it, not just something to make it look pretty at the end.”

When O’Connell met Karen Ingram, a creative director and designer in New York City, over club sandwiches in Brooklyn one day, they quickly gelled. The scientist and artist were surprised to realize how similar their thought processes were. From experience, they knew that powerful things can happen when art and science come together, like the works of Leonardo da Vinci. So they decided to investigate these kinds of overlaps by asking people who work in STEM and creative fields how they come up with unique ideas, collaborate with partners, and share their work with others. Their study, published in SciArt Magazine, concludes that their respective fields are ripe for collaborations that could catalyze “exciting and meaningful ways of communicating solutions and urgency.”

I caught up with Ingram and O’Connell over the phone to hear about some of the creative mashups already happening, like a DIY-genetic engineering kit and “Fallacy Bingo.” Our conversation has been condensed and edited for clarity.

Q. So how would working with artists help climate scientists communicate?

A. O’Connell: I think it would help incredibly. Scientists need to get better at communicating complex issues like climate change because there’s been so much misinformation. It’s not only just educating people, but it’s actively combating all the misinformation that’s out there.

Ingram: If you’re using data and facts and figures as a mode of communication, to a certain set of people it’s never going to gel, ever. Part of it is emotion; part of it is how to make it actionable.

Q. Do you know some scientists and artists working together on climate change?

A. O’Connell: I worked on a project with the Brooklyn Historical Society designing an exhibit called Waterfront in New York City. It was looking at the history of the waterfront and how climate change is affecting it, because sea-level rise has been a huge problem, especially with increased storms. We came up with a really multifaceted exhibit, and climate change was a big piece of it.

I know many scientists who’ve combined dance and science. One of my good friends, Carolyn Hall, is a scientist and a dancer who works on interactive exhibits around New York City looking at science issues and climate change.

Ingram: I see a lot of people in bioengineering, at least in New York, being inspired by fashion. Natsai Audrey Chieza is doing work around a certain type of bacteria that could be like a fabric dye. It would challenge how we scale and produce textiles in one of the biggest polluting industries in the world.

Q. What about you two? Have you worked on any similar projects?

A. Ingram: I met a bioethicist in the Netherlands. We worked on a game called “Fallacy Bingo.”

A. Ingram: It’s an event, like regular bingo. I’ll read off a fallacy from a collection of fallacies we’ve put together — cognitive errors, psychological persuasion, deception and emotion, distraction, and counterfeit. You get a bingo card and you need to figure out what fallacy is being called out. You find the fallacy on the card, and if you get five in a row, you win.

O’Connell: It’s a great game, and it’s a great way to get people thinking critically think about things. It’s done in a really visual, fun way. It wouldn’t have come out like that if you didn’t have an artist involved. 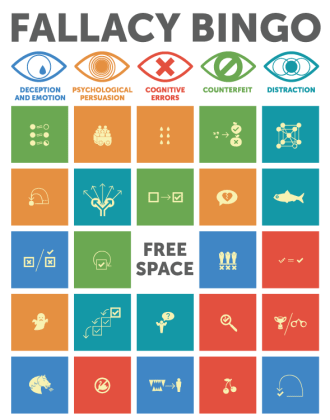 Q. What are some other art-science collaborations you’ve seen?

A. O’Connell: Guerilla Science is doing some great work. They’re thinking about how to communicate science concepts using theater, using exhibits, in a really interactive space.

Ingram: Two University of Pennsylvania professors, Orkan Telhan and Karen Hogan, are the cofounders of the company called Biorealize, a platform that was created to basically be a standalone genetic engineering kit. It looks like a big record player. It has all you need to conduct a simple bioengineering experiment.

A. O’Connell: As scientists, we live on grants. If grants aren’t incentivizing unique collaborations with people outside of your field like artists, like people in marketing, you’re not going to get scientists stepping out of the box to incorporate that. The other roadblock is the tenure and promotion process for scientists — there’s not really incentives to think creatively in terms of partnerships and outreach.

From the artist perspective, too, we forget that artists need to get paid for their work. Writing artists into grants from the beginning, making sure there’s funding for collaborations, is important for them being able to even work on it.

Ingram: Lots of times, art can be an afterthought in the configuration of a project. The amount of time it takes to do something is not necessarily considered. I’ve been lucky to have some grants support some of my collaborative work.

Q. Do you think stereotypes keep scientists and artists from working together, too?

A. O’Connell: There’s definitely stereotypes of artists being flighty or not serious. It’s funny because I’m married to a painter, and I know that’s not true. The way he looks at a painting — he has a point he wants to get out there and it’s all about coming up with the best process, the best means to do that, and putting these questions out there. It reminds me very much of the scientific process.

Ingram: A lot of the stereotypes that creative people have about science is that it’s just not really within their reach. It’s too jargony, too much to sink your head into. We had this one person who was involved with the study, a creative professional, who said she gathered inspiration from scientific fields, but it never occurred to her to collaborate with people in those fields.