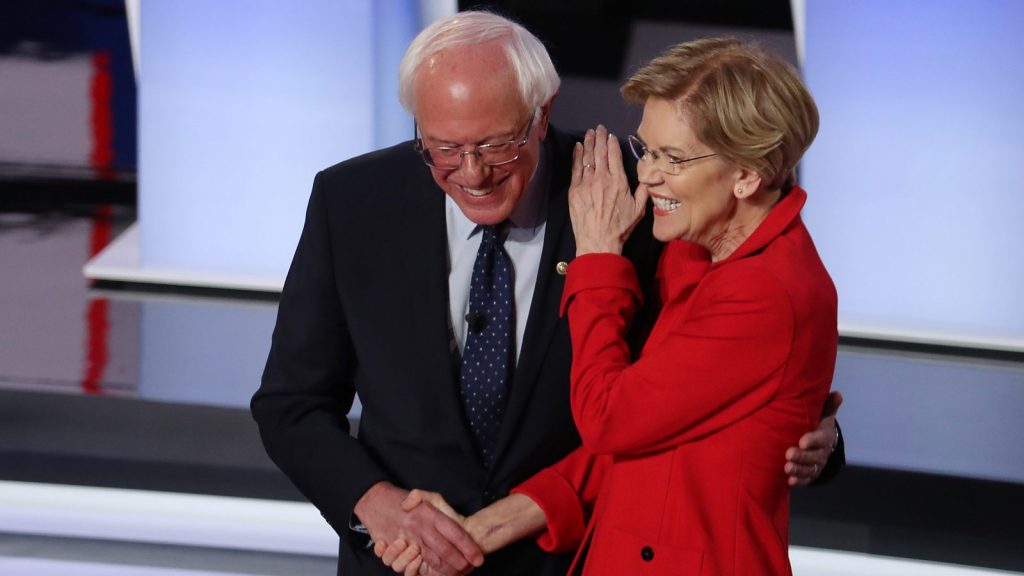 As much as I try to forget it, one of the enduring moments of the 2016 election was Hillary Clinton, in her speech accepting the Democratic nomination for president, deploying “I believe in science” as a laugh line. It was supposed to be humorous because the thought of a president who had said climate change was a Chinese hoax still felt ludicrous. Three years and so many terrible environmental decisions later, it feels a lot less funny. This election cycle, though, Democratic candidates have advanced from where Clinton was in 2016. They’re finally speaking cogently, compellingly, and gravely about the threat we face and the urgency with which we ought to act.

One of the more surprising themes of the past few years has been the mainstreaming of worry over climate change, thanks to the work of scientists, activists, journalists, and, due to our new normal of floods and fires, lived experience. It’s increasingly considered an urgent issue among the Democratic base: Data for Progress ranks climate change as the second most important priority, topped only by beating President Donald Trump, while Pew Research puts it third in terms of issues for Dems. Former candidate Jay Inslee centered his entire short-lived primary campaign on the idea that addressing climate change was the most important action any president could hope to take in 2020. Voters’ interest and candidates’ prioritization seem to have worked together to make climate a focus in many of the Democratic debates so far. According to Vox, climate change ranks fourth in terms of time spent on topics (after health care, immigration, and racial equality), with about 45 minutes devoted to it total before the November debate.

All of this adds up to a remarkable departure from years past, when climate has been so overlooked that environmental journalists essentially made a minibeat out of tracking how little time presidential debates spent on the topic. (In the previous five cycles, 37 minutes and 6 seconds of prime time, general-election debate time was spent on climate change, out of some 1,500 aired minutes.) It’s hard for the counters to break the habit. Even following Wednesday night’s debates, in which climate came up naturally multiple times (better, I think, given the inherently interdisciplinary nature of the topic), there were still confused takes lamenting the lack of time devoted to the subject.

There’s something frustrating about how the candidates are talking about climate change, but you can’t measure it in debate minutes. It’s certainly a relief that we’ve moved on from the years when debating climate change was the time for certain candidates to demonstrate their scientific bona fides and explain the greenhouse gas effect. We’ve finally turned the corner: During Wednesday’s debate, climate change was a business, health, and infrastructure problem, highlighting how much it now weaves through so many aspects of American politics, from housing to natural disasters to the refugee crisis. It is no longer an abstraction but something connected to human needs. Our understanding of this makes obvious why addressing it is a political priority.

But the rapid nature of the turn has left us a bit lost, too. Years of debating health care have left even casual observers with strong feelings on “Medicare for All” and individual mandates. Climate is trickier: Candidates are attempting to detail their plans to curb emissions, but our current lack of existing legislation on this means only those extremely steeped in climate policy are positioned to effectively judge their strategies. (Grist has a very thorough look at every 2020 candidate’s climate policy. It is, by no fault of theirs, an incredible amount of information to parse.) We can slice through the debate chatter in which everyone promises climate action matters to them to understand how the plans compare on a relative spectrum (Senator Bernie Sanders’ and Senator Elizabeth Warren’s are, unsurprisingly, the most ambitious), but two scary questions still hang over everything: Will any of these plans become law? And: Will it be enough?

I think this second question is what the debate-timers really want to know. Before he dropped out in August, Inslee had pushed for an entire debate focused solely on climate, a reasonable enough strategy to up expectations and set standards. The Democratic National Committee refused to grant this request, but others were happy to. Since the DNC rules bar the candidates from participating in traditional debate-style forums they don’t approve, we ended up with events like September’s “Climate Crisis Town Hall,” where 10 candidates took turns individually fielding questions from a moderator on CNN. The whole thing took seven hours. The candidates were able to get very specific about climate policies thanks to the format, but the ratings were terrible.

In early November, another attempt was made at a climate-focused forum. The Weather Channel, along with the journalistic collaboration Climate Desk, released an hourlong climate-focused special featuring several presidential candidates called “Race to Save the Planet.” (Slate contributes to Climate Desk but did not participate in this project.) Perhaps learning from CNN, the hosts did not even attempt to allow all the candidates their own time to describe their plans. Instead, the special makes somewhat ruthless use of the interviews toward presenting the case that climate change is happening and costing Americans dearly, and therefore requires action. It was not dissimilar from what’s been happening on the Democratic primary debate stage — this mainstreaming of climate action as a political necessity — and it’s also of a piece with a larger ongoing project of the Weather Channel’s. For years now, it has been quietly and methodically including climate change in its coverage of the weather, while also investing in big-picture projects that attempt to explain the breadth of the problem to its often very-center-of-the-road audience. (Its “United States of Climate Change” feature, for example, takes pains to have one story for every state.)

One interesting thing about the special, relevant to the question of how climate legislation could ever pass: It featured eight presidential candidates, three of them Republicans. On the Democratic side, there was Sanders, Warren, Senator Cory Booker, Mayor Pete Buttigieg, and Senator Kamala Harris. (Beto O’Rourke participated before he dropped out of the race, so his portion was cut. Former Vice President Joe Biden, like Trump, was invited but declined to participate.) And then it had Republican primary challengers Bill Weld, Joe Walsh, and Mark Sanford. (Sanford dropped out of the race in mid-November, after the special had already aired.)

Why would Republican candidates, even long-shot Republican candidates, show up for such a thing? I think it’s because they realize they ought to. Their voters are starting to care. Since 2016, most Americans, almost always more than 65 percent, have told Gallup that they know climate change is happening and that most scientists agree on this fact. By some counts the percentage is even higher — a survey from the Yale Program on Climate Change Communication suggests 73 percent of registered voters think it’s happening, and 63 percent are worried about it. The situation is still split along partisan lines, as you might expect. Gallup divides respondents into three groups: “concerned believers,” “mixed middle,” and “cool skeptics”; 77 percent of Democrats are “concerned believers” while 52 percent of Republicans are “cool skeptics.” But as the Yale study points out, “Worry about global warming has increased among liberal/moderate Republicans by 15 percentage points since May 2017 and by seven points among conservative Republicans since October 2017.” Part of this shift may be thanks to younger voters. One survey found that 77 percent of Republicans younger than 38 think climate change is a serious threat — compared with 76 percent of Democrats in the same category.

That’s not to say this is anywhere close to simple. Even as acceptance of global warming has grown among Republican voters, Republican lawmakers, seemingly enabled by Trump’s outlandish positions, have only grown more opposed to taking action on climate change. According to the League of Conservation Voters, elected Republican officials now vote against environmental legislation 95 percent of the time (this divergence has only sprung up in the past couple of decades). As the Guardian further points out, there might be a simple explanation for this: “Data collected by the transparency group OpenSecrets shows donations from oil and gas interests were split relatively evenly between the parties until the 2000s,” Guardian reporter Oliver Milman writes. “By the 2018 election cycle, 87 percent of industry contributions went to Republicans, with the proportion in the 2020 cycle, which is yet to be completed, reaching a record 89 percent.”

This underscores the real divide between the parties. It’s not so much that one believes in science and the other doesn’t. Not accepting the science on climate change has become so untenable that even Charles Koch has ostensibly reversed course. (Even Trump isn’t really a denialist. Instead, as the Atlantic’s Robinson Meyer smartly explained in a recent piece, it’s more useful to understand Trump as a carbonist, a person who thinks, for no good reason, that burning fossil fuels is basically macho and therefore good.) But it’s becoming ever clearer that the divide is basically that one party is willing to act to help the people who will suffer through the crisis and the other is aligned with companies hoping to keep on making money off it. The question is whether the latter will remain an option for the Republican Party.

To answer that question, it’s instructive to look back to what sparked the environmental movement of the 1960s and ’70s, prompting the bipartisan creation of the Environmental Protection Agency and the passage of the Clean Air Act, the Clean Water Act, and the Endangered Species Act. The story starts with Rachel Carson’s Silent Spring, serialized in the New Yorker in 1962, which explained how pollution, and particularly the insecticide DDT, was leeching into the natural world, weakening birds’ egg shells to the point that they couldn’t reproduce. America’s national bird, the bald eagle, was existentially threatened. And then — the story goes — the Cuyahoga River caught on fire, the photos went the 1969 version of viral (they were published in Time magazine and National Geographic), and the environmental movement was born. There were Earth Day protests in every city. Even Richard Nixon had to get on board.

The story is only partially right. By 1969, the Cuyahoga River, and other rivers around America, had been catching fire because of pollution for years. In fact, the infamous Time magazine photo was actually taken during another fire — in 1952. What happened in 1969 was that people were ready to act on what they were seeing, instead of dismissing or ignoring it. They had been primed by the years of activists ringing alarm bells. It wasn’t so much that the image of the fire woke people up — it was that the image of the fire finally tipped people over into action.

It feels like we could be on the cusp of an analogous situation now. Yes, it’s all made harder by the years of disinformation from fossil fuel companies that has been reinforced by the right, and yes, America is also facing a perplexing set of existential problems with regard to representative democracy in Washington. But we’ve also had years of alarm bell ringing and patient explanation. And we’ve had years of climate-linked catastrophe, years of stories about the climate-exacerbated natural disasters that are destroying people’s homes and lives with increasing frequency and furor. Democrats sound different when they talk about climate change now. They realize how many of us are finally ready to hear it.