Saturday marked the 136th annual Harvard-Yale football game, a tradition known simply as “The Game” by students and alumni of the rival Ivy League schools. Tens of thousands of people flocked to the Yale Bowl in New Haven to watch. Many more tuned in on ESPNU. But what viewers likely didn’t expect to witness was a historic show of unity between the two schools in the name of fighting climate change.

Just before 2 p.m., as the halftime show was ending and the Yale marching band exited the field, about 150 people ran down the steps of the stadium and onto the turf, staging a sit-in near the 50-yard line. They unfurled banners that read “Nobody Wins: Yale and Harvard are complicit in climate injustice,” “Presidents Bacow and Salovey: Our future demands action now,” and “This is an emergency.”

“We planned to remain there until Yale and Harvard met our demands to divest from the fossil fuel industry and cancel their holdings in predatory Puerto Rican debt,” said Nora Heaphy, a junior at Yale and one of the organizers of the protest. 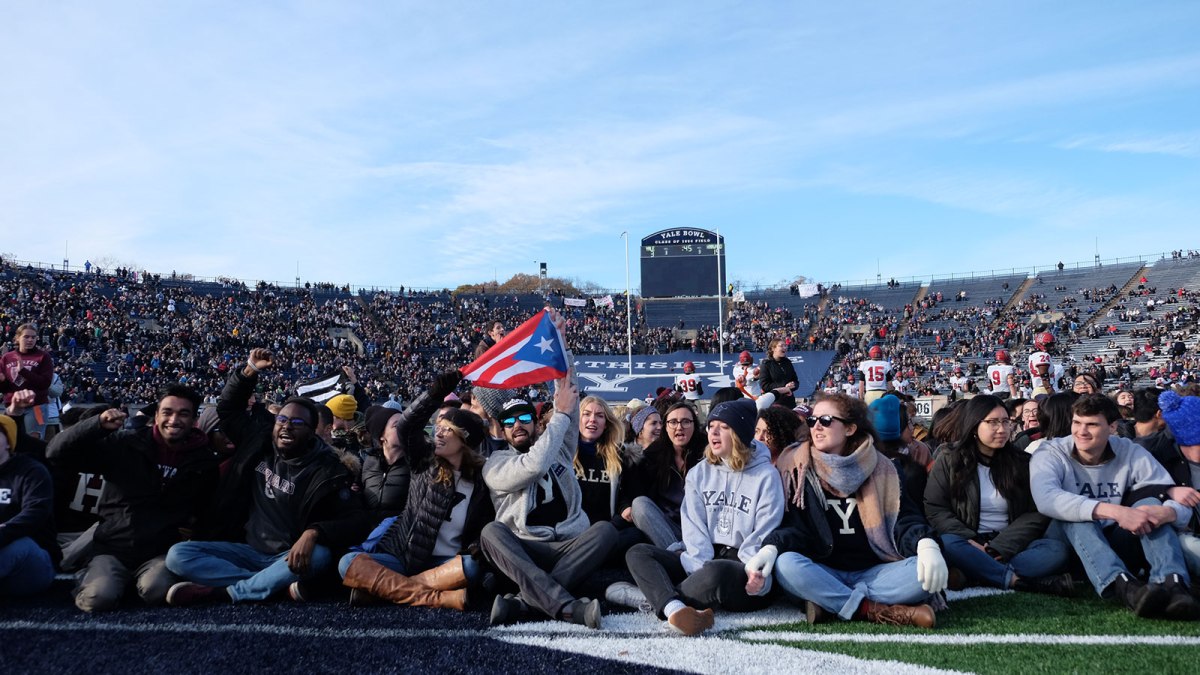 Students at both Harvard and Yale have been asking their administrations to divest their endowments from fossil fuel companies since at least 2012. The schools have a combined endowment of more than $70 billion, but they do not disclose how much of that is invested in fossil fuel companies.

Both universities also have investments managed by hedge funds that hold Puerto Rican bonds. Critics say the bonds are preventing Puerto Rico from rebuilding after Hurricane Maria. A report from Hedge Clippers found that the Baupost Group, which counts Harvard among its largest clients and has investments from Yale as well, has pressured the Puerto Rican government to pay its creditors before paying for basic services or infrastructure. The Yale Daily News reported that one of the funds managed by Baupost actually sued Puerto Rico over the debt in 2017.

Heaphy said that in the months leading up to the game, students with the groups Yale Endowment Justice Coalition, Fossil Free Yale, and Fossil Fuel Divest Harvard planned the action in secret. They recruited students in person, over the phone, and using the encrypted messaging service Signal, fearing that if either administration got wind of their intentions they would never make it onto the field.

An initial air of confusion rippled through the stadium on Saturday when the sit-in began, but ten minutes later, the significance seemed to dawn on game-goers all at once, as hundreds more people spontaneously poured out of the stands to join in. Many of those who remained in their seats chanted “fossil fuels have got to go” in solidarity. The protest delayed the game by about an hour, at which point Yale and New Haven police officers ushered the group off the field, issuing citations to 42 students. 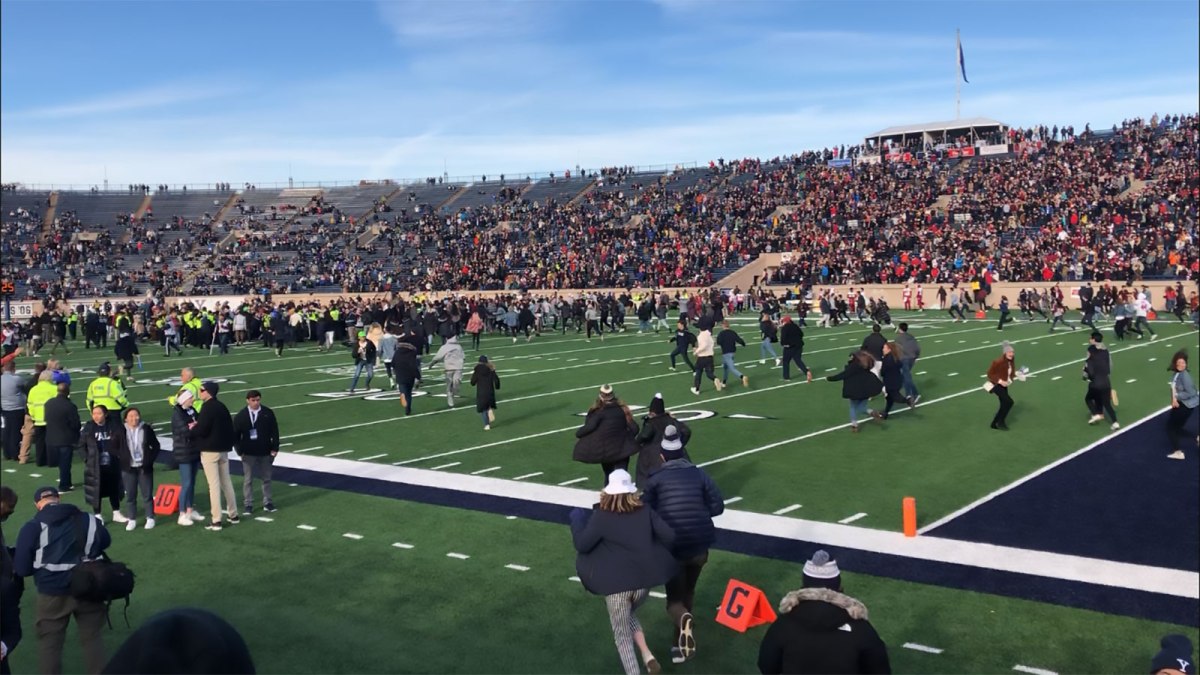 The Yale marching band and members of both football teams were in on the plan. After the game, the Harvard football captain Wesley Ogsbury recorded a video publicly declaring his support. “Harvard and Yale can’t claim to truly promote knowledge, while at the same time supporting the companies engaged in misleading the public, smearing academics, and denying the truth,” he said.

Caleb Schwartz, an organizer from Fossil Fuel Divest Harvard, said his group’s goal is to get the university to disclose its investments in fossil fuel companies by Earth Day 2020. Without that transparency, “we can’t even begin to have an honest conversation about Harvard’s role in the climate crisis,” he said.

Schwartz said Harvard administrators have gone from ignoring calls for divestment to engaging in conversation with activists to ultimately deciding to address climate change through shareholder engagement rather than divestment. In September, Harvard announced it was joining Climate Action 100+, an investor-led initiative to ensure oil and gas companies are taking steps to curb emissions.

Meanwhile, Yale has partially divested. In April 2016, Yale chief investment officer David Swensen wrote a letter to the student body announcing that two of Yale’s investment managers had sold “less than $10 million” in holdings from coal and oil sands companies. However, the investment office’s official statement on climate change states that “Targeting fossil fuel suppliers for divestment, while ignoring the damage caused by consumers, is misdirected” and that “modern society could not exist without fossil fuel consumption.”

A statement from Yale in response to Saturday’s protest stated that the university stood “firmly for the right to free expression” but added that it was “regrettable that the orchestrated protest came during a time when fellow students were participating in a collegiate career-defining contest and an annual tradition when thousands gather from around the world to enjoy and celebrate the storied traditions of both football programs and universities.”

A statement from Harvard provided to the New York Times on Saturday read, “While we agree on the urgency of this global challenge, we respectfully disagree with divestment activists on the means by which a university should confront it.” The statement went on to vow that Harvard would demonstrate climate leadership “through research, education, community engagement, dramatically reducing its own carbon footprint, and using our campus as a test bed for piloting and proving solutions.” 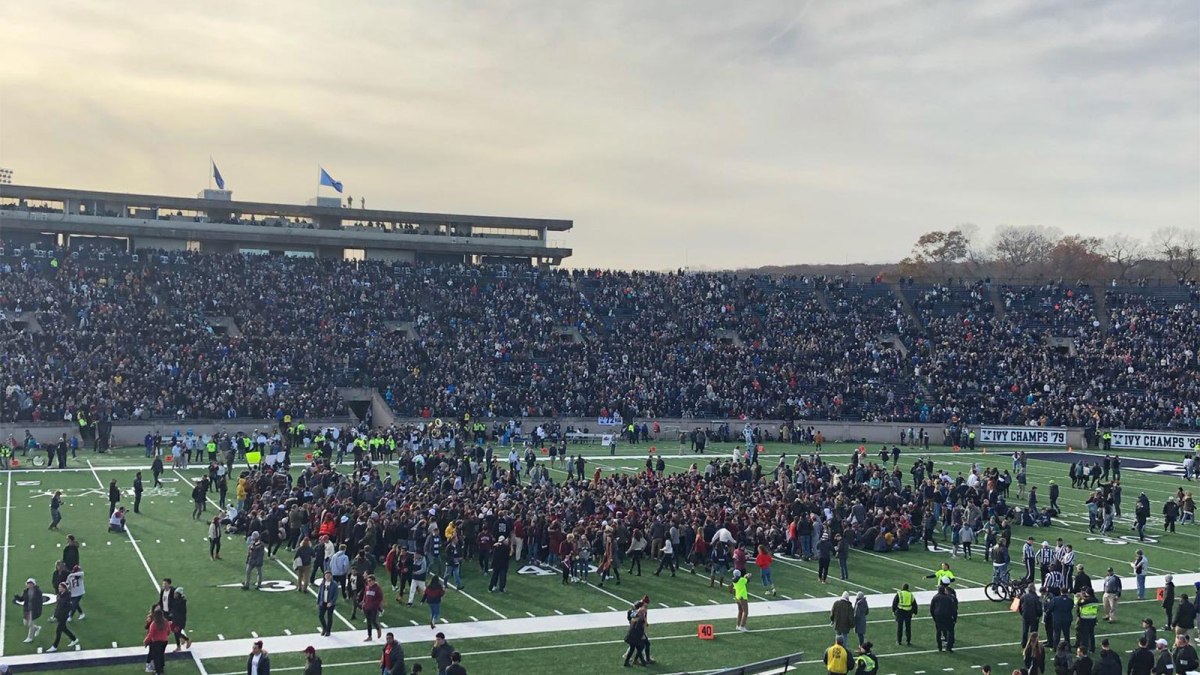 Students involved in the protest said that Yale and Harvard should be leaders in divestment. Martin Man, a recent alumni of Yale’s architecture school, said that Yale’s chief investment officer, David Swensen, is an influential figure in the world of university investing and that other schools will likely follow his lead.

“We know there’s political will for this right now,” said Yale freshman Josephine Ingall. The entire University of California system announced its plan to fully divest its $13.4 billion endowment and $70 billion pension fund from fossil fuel companies earlier this fall. Two small liberal arts colleges, Smith and Middlebury, have also decided to divest from fossil fuel companies in the past year.

Heaphy, who was charged with a misdemeanor for disorderly conduct and will need to appear in court, said it was a small price to pay. “I’m feeling very hopeful that this could be the moment that changes the tide,” she said. “The people who flooded the field were on our side, and they were willing to, in the moment without knowing this was happening beforehand, show their support in demanding that our universities listen.”