The people flooding into San Francisco for the Global Climate Action Summit come in all shapes and sizes. There are legions of grungy anarchists and crisply ironed elites jostling through crowds in the Financial District. Partisan campaigners and meticulously nonpartisan scientists, wonks of the nonprofitariate and the wannabe renewable-industry tycoons, techies in branded hoodies and hippies in sarapes are squeezing into crowded BART cars.

The summit doesn’t officially kick off until Wednesday, but when you bring such a diverse group of people together who all want to fight climate change, things start happening fast. Over the weekend, tens of thousands of people marched down Market Street singing and carrying signs.

Indonesian officials met with Brazilian foresters at the downtown Parc 55 hotel on Monday, while indigenous people wearing feathers and face paint protested that meeting from the narrow street outside. A few blocks away, artists unspooled cables and wheeled massive lights to project art onto the face of the city hall. Talks and trainings, declamations and dialogues, had already sprung up by the dozen, all over town. 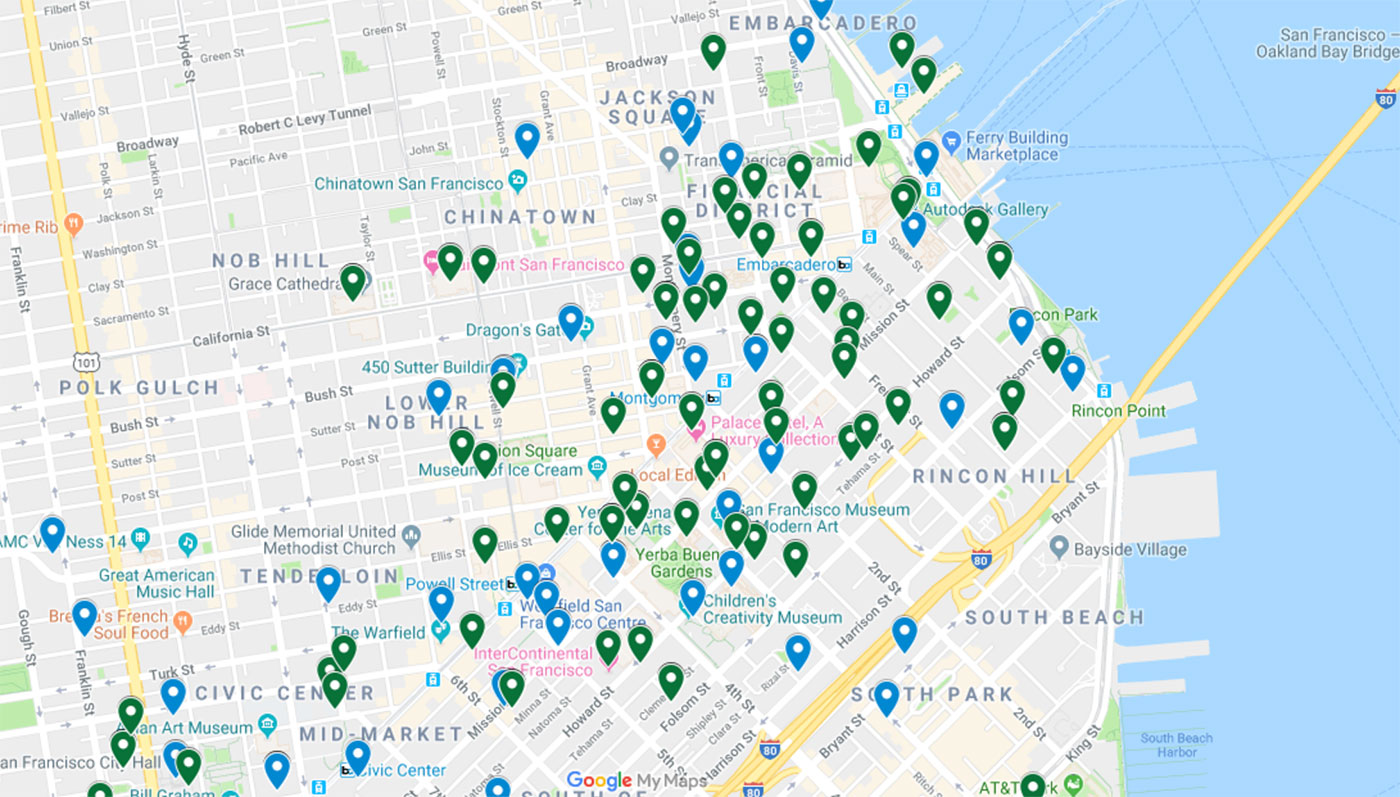 Spots for some of the climate events in San Francisco.  Google Maps

California’s Governor Jerry Brown called for the conference nearly three years ago, in hopes of spurring action beyond the commitments countries made in Paris in 2015 to cut greenhouse gas emissions. But the event took on new meaning after President Donald Trump entered the White House and pulled the United States out of the Paris Agreement. Climate realists then pinned their hopes on California: If the state — home of the fifth-largest economy in the world — allied enough U.S. cities and states, perhaps they could simply vault over the federal government and land in a cooler, cleaner future.

There is some hope of actual progress. Politicians and corporations are sure to make impressive-sounding commitments, if only to have something to announce to the crowds. Sony already pledged to go 100 percent renewable, along with the Royal Bank of Scotland and the consultancy McKinsey & Company.

The biggest commitment so far: Brown signed a law on Monday requiring California’s electrical generation to stop emitting greenhouse gasses, then tacked on an order for the state to choke off all emissions at the same time (a much, much higher bar, but an executive order is much, much more ineffectual than a law).

It’s one thing to pledge and another to deliver. A recent report suggests that the European countries are already falling behind on promises made in Paris. Instead of falling, global carbon emissions rose last year, and the fossil-fuel economy is still growing faster than the clean-energy one. Rich countries promised to pay poorer countries to combat climate change, but that money hasn’t materialized.

The real value of the summit will likely be humdrum and humanscale: People will meet face to face, argue, make connections, and walk away with new ideas.

But if you’re looking for tectonic shifts in the coming days, the biggest news could come from China. The largest polluter in the world is a primary partner in organizing the summit, and has arranged a “China Pavilion” where the first day of speeches will take place.

As Trump began rolling back Obama-era policies, Brown began looking for ways to make climate partnerships with China. He spent a week there last year, hand delivering a first-edition of John Muir’s book “The Mountains of California” to President Xi Jinping.

“California’s leading, China’s leading,” Brown said at a news conference after that meeting with Xi. “It’s true I didn’t come to Washington, I came to Beijing.”