On a choppy voyage to Antarctica in 1928, the crew of the ship that would eventually be rechristened as the Vamar bestowed upon their vessel an optimistic nickname: “Evermore Rolling.” It proved to be a bit of a misnomer. Far from slicing through cresting waves forever, the ship sank near Florida in 1942, 3.7 miles from the shore of Mexico Beach, possibly because it was loaded down with too much lumber.

It was wrecked, true, but its story didn’t end there. In 2004, the shipwreck was designated as one of Florida’s Underwater Archaeological Preserves; it was added to the National Register of Historic Places two years later. Now, the sepia, green, and gold waters around it are full of life. Fish dart through the ruins of the mangled iron broiler, and plants shoot up through the piecemeal hull and beams. Sea turtles scratch their shells against iron bars splayed out just above the sandy seabed, leaving burnt-orange rust behind them. Divers drop by to take it all in.

Shipwrecks aren’t necessarily barren, static things, vanished and abandoned to the deep water and the recesses of someone’s foggy memory. They may be moldering, but, like the Vamar, they’re often active places — part cultural heritage site, part dynamic ecosystem. They’re constantly in flux, and they’ll be impacted as climate change affects the water that holds them. 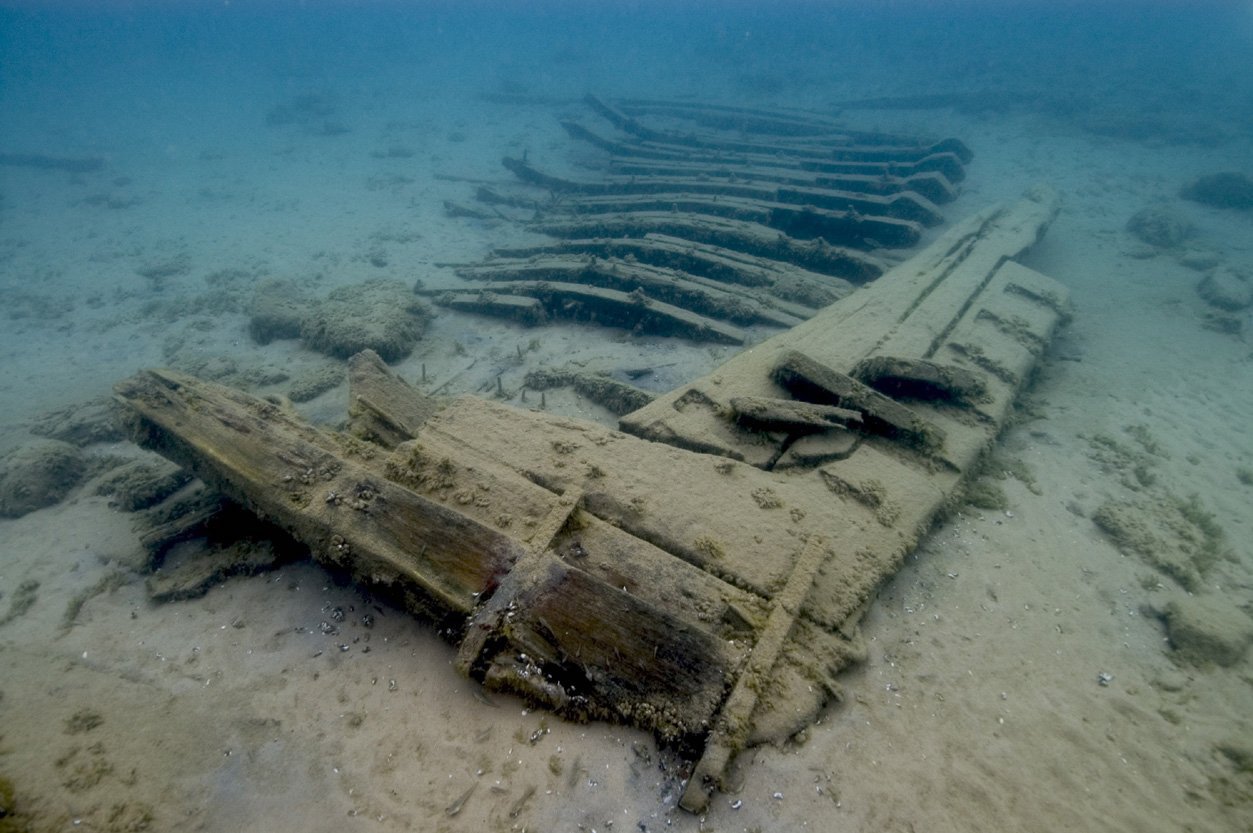 Some wrecks lay flush against the sand. NOAA PHOTO LIBRARY/CC BY 2.0

For years, archaeologists have mainly been concerned with what climate change might do to places where the land meets the water. They’ve examined ways to stave off rising tides by buffering sites that will be swamped, hauling things to higher ground, or documenting whatever they can in the water’s path. For these sites that are not yet damp, water is a threat — sometimes a distant one, sometimes one that’s gaining ground — but for the wrecks, it’s a foregone conclusion. That ship has sailed — and sunk.

With climate change, “sea-level rise is the most obvious thing people are used to hearing about, and the most easily dismissed with submerged sites,” says Jeneva Wright, an underwater archaeologist and research fellow at East Carolina University. Sea-level rise is far from the only climate-related threat facing submerged sites, though: Wright outlined a handful of others in a 2016 paper in the Journal of Maritime Archaeology, written when she was working as an archaeologist in the National Parks Services’ Submerged Resources Center.

Across the field, there’s admittedly little data about some of these risks, and Wright says that archaeologists would do well to collaborate with biologists, ecologists, oceanographers, and other scientists who have amassed much more information about what a changing climate will do to parts of these ecosystems. For now, Wright describes her reading of these risks as “theoretical, hypothetical, and logical,” meaning that though there’s fairly limited research within archaeology, these forecasts square with projections that researchers in other fields have arrived at, after starting to scrutinize the future effects of climate change on, for instance, ocean chemistry, reefs, and other marine life.

Storm surges and violent weather pose an immediate threat: Hurricanes tracking right over shipwrecks can splinter them into oblivion, or at least strip protective coverings and expose timbers, coral-covered cannonballs, and other features to battering currents and wind. This already happens. As a graduate student in 2014, Wright conducted research in Biscayne National Park, at the HMS Fowey. To cushion the wreck against a storm surge or hurricane event, the Parks Service had partially reburied it with sandbags and sediment. Then a storm swept through the following year. When it hit, “all of that sediment was dispersed and taken away,” Wright says. “It was sort of a failure of the reburial effort, but was sort of a success, because if that sand hadn’t been there, it would have been just this 18th-century British warship that had dispersed all over the place.” 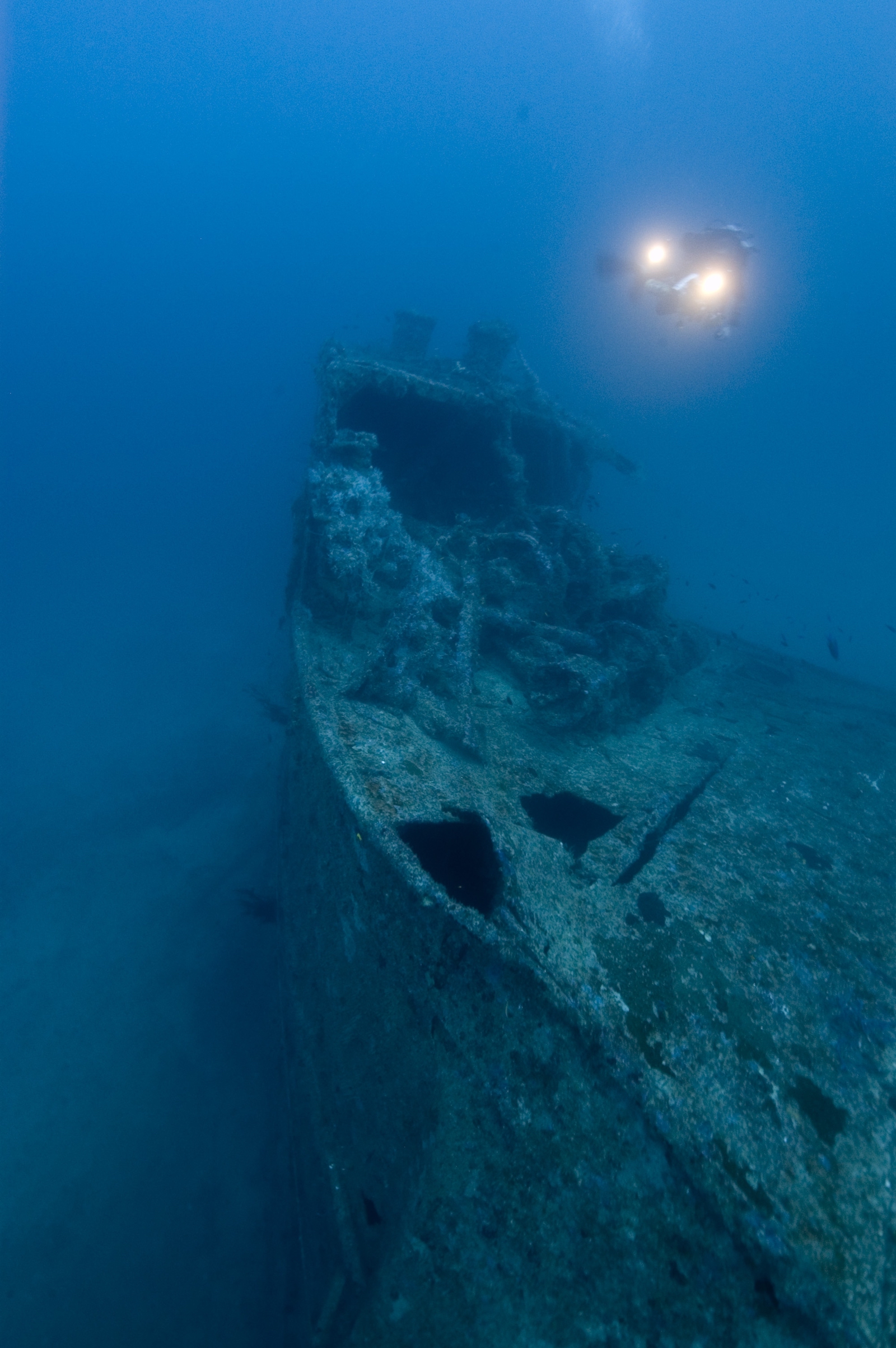 Many wrecks are coated in concretions, which look like cement and can help hold everything together. NOAA PHOTO LIBRARY/CC BY 2.0

Other changes will be less physically brutal, and maybe less obvious to landlubbers, compared with pelting rain and wild winds. Wrecks are already deluged, of course, but rising sea levels could affect them, too, because depth changes — even relatively small ones — can trigger changes that cascade through the environment. Underwater, a change in depth can correlate to a change in temperature, and that in turn may change the species that can survive there. Take seagrass. In many wrecks around Florida, for instance, seagrass functions as an anchor, holding sediment in place and blanketing fragile timbers. Some of these species vanish below about 30 feet; anything deeper is too cold, too dark, and too devoid of oxygen. A sea-level rise of just a few meters could theoretically swamp these wrecks with enough water to threaten the survival of the species that lock them in place, Wright says. (In Florida, the National Parks Service manages parks around the estimate that waters will rise three feet by 2100.)

As the ocean absorbs more carbon dioxide, it is also becoming hotter and more acidic. The Smithsonian has referred to ocean acidification as “climate change’s equally evil twin,” and it could pose big problems for wrecks. Associated chemical changes will likely erode the cement-like coating that covers many historic wrecks. This protective layer, called concretion, appears most often on iron wrecks; it’s a byproduct of rust interacting with seawater and attracting organisms. “You’ve got this crusty stuff that’s covering everything, and it can protect it for centuries,” Wright says. But “because it’s a calcium carbonate — just like Tums that you would eat if you had an upset stomach — it’s really, really sensitive to acid.” When the acid content increases, “all of that protective coating that’s over these cultural materials can vanish — like, literally vanish,” Wright says. Research in this vein tends to focus on the similar threats faced by calcifying marine life such as corals, clams, oysters, and sea urchins. When researchers extrapolate that to shipwrecks, Wright says, “You go, ‘Ooh, that’s bad.’”

Chemical changes can also be quite dangerous in light of what might still be stashed inside a ship’s hull. Sunken World War II naval vessels might still hold a smattering of “big, bad things,” Wright adds, from armaments to biohazards such as vast quantities of oil. Most of these ships are made of rusting metals. “The more temperature you add, and the more acidic that environment is, the faster those shipwrecks can deteriorate,” Wright says. “And suddenly you’re looking at the loss of cultural heritage, but you’re also looking at the release of whatever those wrecks are holding.” In many cases, it’s not realistic to extract the potential pollutants from these sites, or to raise them from the sea. They may be war graves, holding soldiers’ remains, or else submerged in very deep water. 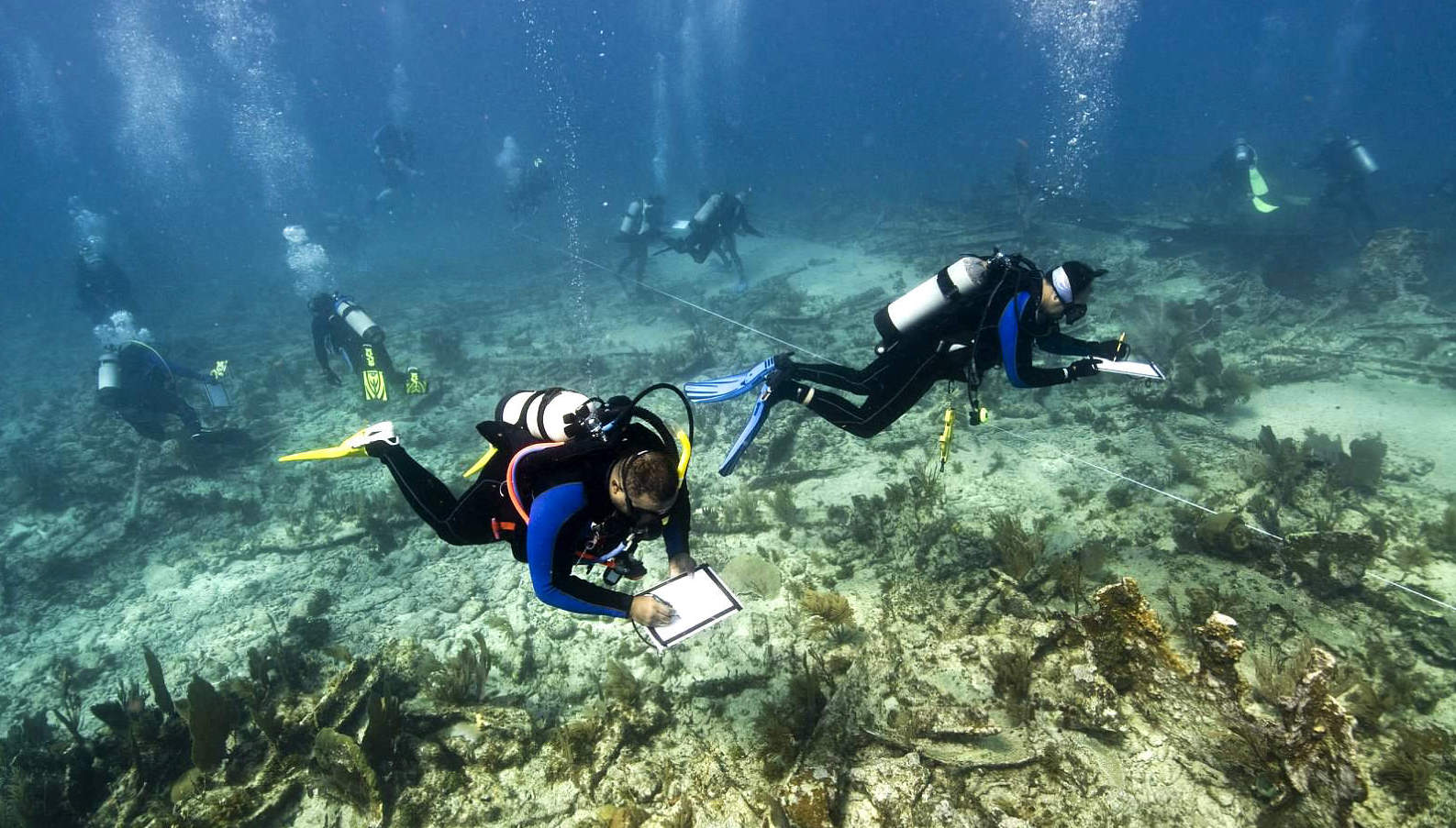 One way to get a handle on all of these dangers is to track them. That can be tricky, because archaeologists and rangers don’t always stop by to regularly check in on watery wrecks as easily as they do terrestrial sites, says Sara Ayers-Rigsby, director of the southwest and southeast branches of the Florida Public Archaeology Network (FPAN), a project based out of the division of archaeology and anthropology at the University of West Florida.

“These sights are very much out of sight, out of mind for everyone who doesn’t dive,” says Della Scott-Ireton, the associate director of the FPAN program. But in Florida, a lot of people do dive. Tourists often come to Florida to explore the 12 underwater archaeological preserves scattered all around the state’s perimeter, or the nine wrecks that dot the reefs and sandy floor of the Florida Keys National Marine Sanctuary, managed by the National Oceanic & Atmospheric Administration. NOAA has devised a “Shipwreck Trail,” which divers are welcome to visit, and the Department of State has documented the sunken bows, sterns, and other portions of the wrecks that comprise what it calls “Museums in the Sea.” Scott-Ireton describes places like these as “low-hanging fruit”: Since divers will already be there, FPAN stands to benefit from persuading them to jot down some observations while they swim around.

Tapping into the citizen science brain trust is logical, because tourist divers already have their goggled eyes on the seabed. FPAN runs trainings in archaeological stewardship for sport divers, and earlier this summer, began adapting its Heritage Monitoring Scouts program — a self-guided citizen science effort — to include observations of underwater sites. Participants will descend with a waterproof mylar form for recording their observations, and look around for evidence of climate impacts (say, sediment buildup or disappearance), as well as other changes, like traces of looting or vandalism. So far, FPAN has received 10 forms, Ayers-Rigsby says, including some that document sites that the archaeologists didn’t yet have on file. Eventually, Scott-Ireton hopes to be able to loan out salinity meters so that divers can take measurements and report back, but that will depend on future funding.

In the past, there have been occasional skirmishes between archaeologists, who want to preserve the past, and some divers, who want to plunder it. Wright says it certainly doesn’t have to be that way. “As a diver and someone who gets excited about shipwrecks, you can direct that enthusiasm in two ways,” she says. One option is pilfering a porthole for your mantlepiece, as a souvenir. The alternative, she says, is thinking, “I experienced this amazing dive, and I want to protect it, and I want to be a part of telling its story.”