The term 'eco-terrorist' is back and it's killing climate activists 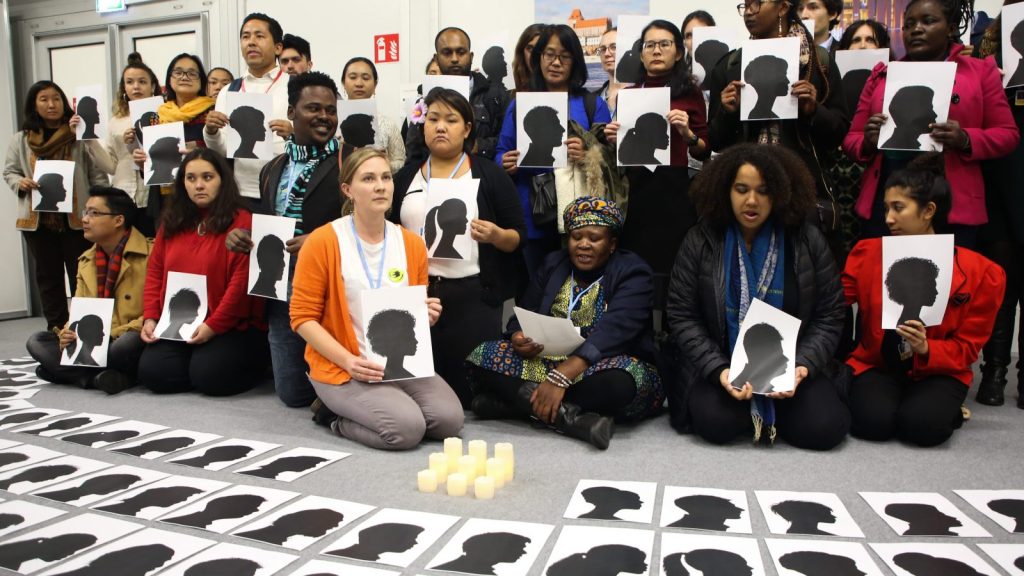 NurPhoto / Contributor / Getty Images
by any other name

When devastating wildfires were sweeping the West last fall, Ryan Zinke, who recently announced his resignation as Interior secretary, lay the blame for the blazes on a ragtag group of environmentalists. “We have been held hostage by these environmental terrorist groups that have not allowed public access, that refuse to allow the harvest of timber,” Zinke said in an interview with Breitbart News.

Environmental activism has long put protesters at odds with government officials. But instead of dismissing climate-conscious demonstrators as hippies or “tree huggers,” government officials have begun using more dangerous labels — including “terrorist.”

It’s happening all over the world, from the U.S. to the Philippines to Brazil (which just yesterday inaugurated particularly anti-environmental/indigenous President Jair Bolsonaro). It even happened at the recent United Nations climate talks in Poland. More than two dozen climate activists headed to the summit in Katowice were deported or refused entry on the pretext of being national threats.

“I had absolutely no time to react,” said Zanna Vanrenterghem, a staff member at Climate Action Network Europe who was pulled off a train from Vienna to Katowice by border patrol agents. “The fact that this happened to 15 other people for similar reasons is very frightening. This is just a very small symptom of a larger disease.”

When it comes to justifying (and promoting) extreme actions, language matters. As Grist’s Kate Yoder wrote, earlier this year, labeling activists as “eco-terrorists” isn’t new. Charges of eco-terrorism peaked in the 1990s, but dissipated for the most part by 2012.

Now the term is starting to pick up steam again. And the consequences of treating environmentalists like terrorists can go to much further lengths than denying them entry to a climate conference.

Standing Rock was a turning point in the American war of words against climate activists.

In 2016, law enforcement agents used tear gas and water cannons (despite freezing temperatures) on Dakota Access pipeline protesters at the Standing Rock Indian Reservation. Since those protests, dozens of bills and executive orders have been introduced to suppress similar environmental demonstrations.

Activists say this is part of an aggressive campaign by fossil fuel companies and their government allies to increase criminal penalties for minor violations — such as trespassing on a pipeline easement — as a way of suppressing climate action. Eighty-four members of Congress sent a bipartisan letter to the Department of Justice last fall, asking officials to prosecute pipeline activists as “terrorists.” And bills introduced in Washington and North Carolina would have defined peaceful demonstrations as “economic terrorism.”

And as we know in the U.S., branding a group of people as “terrorists” is kind of a big deal.

The label of “terrorism” has always been contested and politicized. Advocates for human rights say that the term has been used to suppress criticism of the government or corporate interests. “Making antiterror laws, that’s the most rational, the most logical tool [governments] use against indigenous people and all those that are critical of government,” said Victoria Tauli-Corpuz, the United Nations special rapporteur on the rights indigenous peoples, during a panel discussion this spring at the U.N. Permanent Forum on Indigenous Issues.

Daniel Sheehan of the Lakota Law Project, which provided legal defense to Standing Rock protesters, likened modern cries of domestic terrorism to anti-communist rhetoric in U.S. history. “Instead of communist, they now call you a terrorist, anybody who’s opposing the capitalist system,” says Sheehan. “What you get is this thing called industrial terrorism, these statutes that say if you do anything which is a direct action to attempt to impede a corporation from being able to pursue its business and to make its profit, that is terrorism.”

As a result of protests at Standing Rock, Energy Transfer Partners — the developer behind the Dakota Access Pipeline — filed a civil suit for $900 million against Greenpeace and other environmental groups alleging acts of eco-terrorism. Greenpeace has called the suit a “textbook strategic lawsuit against public participation (SLAPP).”

“The fact that corporations are trying to frame environmental advocates in that way, it’s just a very clear example of how they’re trying to stigmatize it without addressing the concerns of the movement which are very legitimate,” says Rodrigo Estrada, senior communications specialist at Greenpeace. “In the end, this is about the protection of communities and the environment.”

While the backlash against Standing Rock protesters was iconic, it was far from the most serious consequence of anti-activist fear-mongering.

In February 2018, the President Rodrigo Duterte of the Philippines sought to label Victoria Tauli-Corpuz, the United Nations special rapporteur, as a terrorist. Tauli-Corpuz’ job is to look into abuses against indigenous peoples and present her findings and recommendations to the United Nations Human Rights Council. She’s been a vocal advocate for global action on climate change. And even before her tenure began in 2014, she has been a staunch defender of her tribe’s land, the Kankana-ey Igorot people of the Cordillera Region in the Philippines. Tauli-Corpuz has also called attention to the killings of indigenous Lumad people, who have long defended their land from logging and mining interests.

President Duterte filed a petition to designate more than 600 people, including Tauli-Corpuz, as terrorists for their alleged connections to the Communist Party of the Philippines and its New People’s Army. Duterte has also waged a bloody “war on drugs” (which some critics say has also been an excuse to eliminate his political opposition) that has led to thousands of alleged drug-dealers being killed by police and vigilantes.

In an interview with the Thomson Reuters Foundation, Tauli-Corpuz called the allegation of terrorism against her “entirely baseless and malicious.”

“The government sees this as an opportunity to pursue people they don’t like. I am worried for my safety and the safety of others on the list, including several rights activists,” she said.

The charge against Tauli-Corpuz was dismissed last August after an international outcry. But many other activists remained on the president’s petition to designate individual leaders and the Communist Party of the Philippines as terrorists.

And governments don’t always stop at mere intimidation and harassment. 2017 proved to be the deadliest year on record for environmental activists, with the most killings perpetrated in Brazil and the Philippines. Nearly 200 activists were killed — an average of nearly four per week. The Guardian, which has attempted to track the growing number of protester deaths, reported that at least 83 environmental activists were killed in 2018.

Just last month, two members of Brazil’s landless activist group Movimento dos Trabalhadores Rurais Sem Terra were killed following comments from (then-candidate, now President) Jair Bolsonaro in which he called them “terrorists.” His comments have also been linked to assaults against members of Brazil’s indigenous groups, many of which are fighting to keep protected status for their lands. (In one of his first acts as President, Bolsonaro issued an executive order giving the anti-environmentalist Agriculture Ministry power to decide on indigenous lands.)

The activists’ murders in Brazil are the latest in a long line of alleged crimes against people who oppose Bolsonaro’s plans to ramp up deforestation in the Amazon. Brazilian activists fear Bolsonaro could inspire even more violence against environmentalists and indigenous peoples.

“Bolsonaro’s racist, fascist, genocidal government will not be enough to silence us,” said Dinamã Tuxá, coordinator of Brazil’s Association of Indigenous Peoples, in an interview with Amazon Watch. Still, he hinted at the fact that President Bolsonaro’s word choices could be continue to result in loss of life for indigenous activists down the road.

“This violence has become institutionalized and has saturated state institutions,” he said.

Back in the U.S., protesters are worried law enforcement is planning to employ violent tactics to stop anti-pipeline demonstrations in 2019.

In September, the American Civil Liberties Union obtained emails in which U.S. government officials characterized pipeline opponents as “extremists” and violent criminals that could commit potential acts of “terrorism.” The documents suggested that police were organizing counter-terrorism tactics to clamp down on possible Keystone protests. (If construction on the embattled Keystone XL pipeline advances in the coming months, it will likely draw protests from indigenous and environmental activists.)

“Evidence that the federal government plans to treat Keystone XL protests with counterterrorism tactics, coupled with the recent memory of excessive uses of force and surveillance at the Standing Rock protests, raises immense concerns about the safety of indigenous and environmental protestors who seek to exercise their First Amendment rights,” wrote Jacob Hutt, a fellow at the ACLU, in a blog post for the organization.

Although it may seem counterintuitive, Estrada of Greenpeace says the alarmist language may be a sign of progress. “The more effective people are becoming in mobilizing, the more backlash they’re going to face … If you corner a wild animal, they’re going to come really hard back at you.”

“The more we can voice that these things are happening,” Estrada says, “the more strength that we can provide to those people that are on the frontlines of these very dangerous situations.”