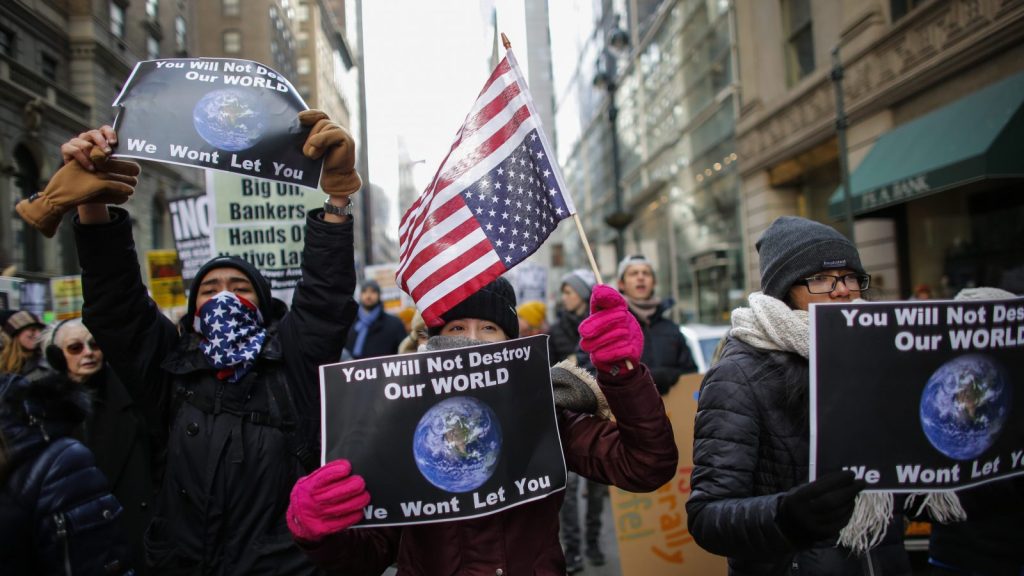 “Nonviolent direct action seeks to create such a crisis and establish such tension that a community that has constantly refused to negotiate is forced to confront the issue.” — Martin Luther King, Jr.

In April 1963, Martin Luther King, Jr., wrote his Letter from a Birmingham Jail after being arrested during a civil rights demonstration. Fifty-five years later, the words he wrote aren’t lost on today’s pipeline protesters and people’s climate marchers.

From Standing Rock to Bayou Bridge protests, the movement toward a climate-just future has never made bigger headlines. And the stakes have never been higher — for the planet, for vulnerable communities, and for those protesting to save it.

In the past 18 months, more than 60 bills have been introduced in 31 states that specifically target protests — whether it’s racial justice activists shutting down highways or environmentalists trying to stop pipelines. The presidency of Donald Trump has coincided with mounting attempts to curb people’s rights to assemble.

Attorneys offering support to demonstrators are quick to point out that these bills narrow the range of what’s allowed at a protest. They also heighten the penalties for breaking both the old and new rules.

“Protesters are likely to face additional and heightened charges for these criminal penalties,” says Maggie Ellinger-Locke, an attorney with Greenpeace. “It’s already illegal to trespass, but now it’s going to be a felony.”

In North Dakota, in the wake of the high-profile Standing Rock demonstrations against the Dakota Access Pipeline, the definition of criminal trespass was widened to include being on a premises without permission, even if there’s no verbal or posted message that explicitly says you’re not supposed to be there. Big Oil has also gone on the offensive with demonstrators. Energy Transfer Partners, the company behind Dakota Access, is suing Greenpeace and other environmental groups, labeling them “eco-terrorists” for their involvement at Standing Rock.

The First Amendment protects protest by ensuring freedom of speech, the right to assemble, and the right to petition our government. But officials at environmental and community rights organizations say demonstrators might not know what the new laws — and their enforcement — could mean when they next take to the streets.

Protesters’ best defense is to arm themselves with knowledge of their rights, according to Ellinger-Locke. She suggests picking up the pocket-sized know-your-rights guide from the National Lawyers Guild (which is available in six different languages).

The most important right for activists to commit to memory, according to Ellinger-Locke? Don’t talk to law enforcement. “The only thing that you should say to law enforcement is ‘I want to speak to a lawyer,’” she says. “You have to repeatedly invoke your right to be free from self-incrimination.”

Of course, Ellinger-Locke’s advice pertains to people before they enter the criminal justice system. But when it comes to dealing with that gantlet, it’s important to remember that the playing field isn’t necessarily level for everyone. Immigrants, youth, and activists of color must often take additional precautions because marginalized groups often face criminalization within the system.

California nonprofit Communities for a Better Environment organizes neighborhoods with the most to lose, what activists call frontline communities. Because a large part of their membership base comes from immigrant families, the Trump administration’s immigration policies have impacted the organization and its members.

“We’ve had to develop an emergency protocol, a procedure for the organization in case immigration officers come into our office,” says Executive Director Darryl Molina Sarmiento. “We have to develop those types of guidelines for our members to feel safe.”

Molina Sarmiento points out that teens, who have been taking the lead on pushing for social change, have vulnerabilities, too. “Certain youth get more targeted then others,” Molina Sarmiento says, adding that sometimes even the clothes that young people wear can attract unwanted attention. Youth in punk gear, for example, she says, have been “seen as inciters of violence.”

The American Civil Liberties Union also has a know-your-rights guide that includes information on free speech laws, as they apply specifically to immigrants and students. By knowing who’s most vulnerable, campaigns can take precautions and allocate resources to provide additional support and protection.

Many groups who are more vulnerable to arrest or unfair treatment within the criminal justice system are also often residents of frontline communities that suffer the most from environmental injustice.

“Folks have to reclaim space and reclaim that safety,” Molina Sarmiento explains, adding that members of those groups should still feel empowered to fight for themselves and their neighbors.

Ellinger-Locke with Greenpeace notes that it’s hard to take issue with activists who could be targeted being intimidated by these new laws. But she adds that shying away from protest means those that want to stifle dissent have won.

“The only way we make social change is when we stare down that fear and build community together,” she says. “Another world is possible.”