The dystopian vision depicted in John Lanchester’s new novel is already starting to come true, in bits and pieces, and the book has only been out for a few months.

After writing a behemoth of an essay about climate change more than a decade ago, the British writer decided to revisit the subject he says he finds “unbearable” in the form of speculative fiction. The Wall takes the twin threats of climate change and xenophobia to imagine a future society, one that’s unforgiving, grim, and desolate. Trust me, you do not want to live there.

The book opens on a bitter-cold day at the Wall, sometime after the “Change.” You can smell metaphor in the air. The 15-foot-high concrete barrier completely surrounds a frigid, northern island that bears a strong resemblance to England. The Wall serves two purposes. It keeps out the rising waters, and it keeps out the “Others,” the starving, desperate millions of refugees fleeing now-uninhabitable parts of the world. 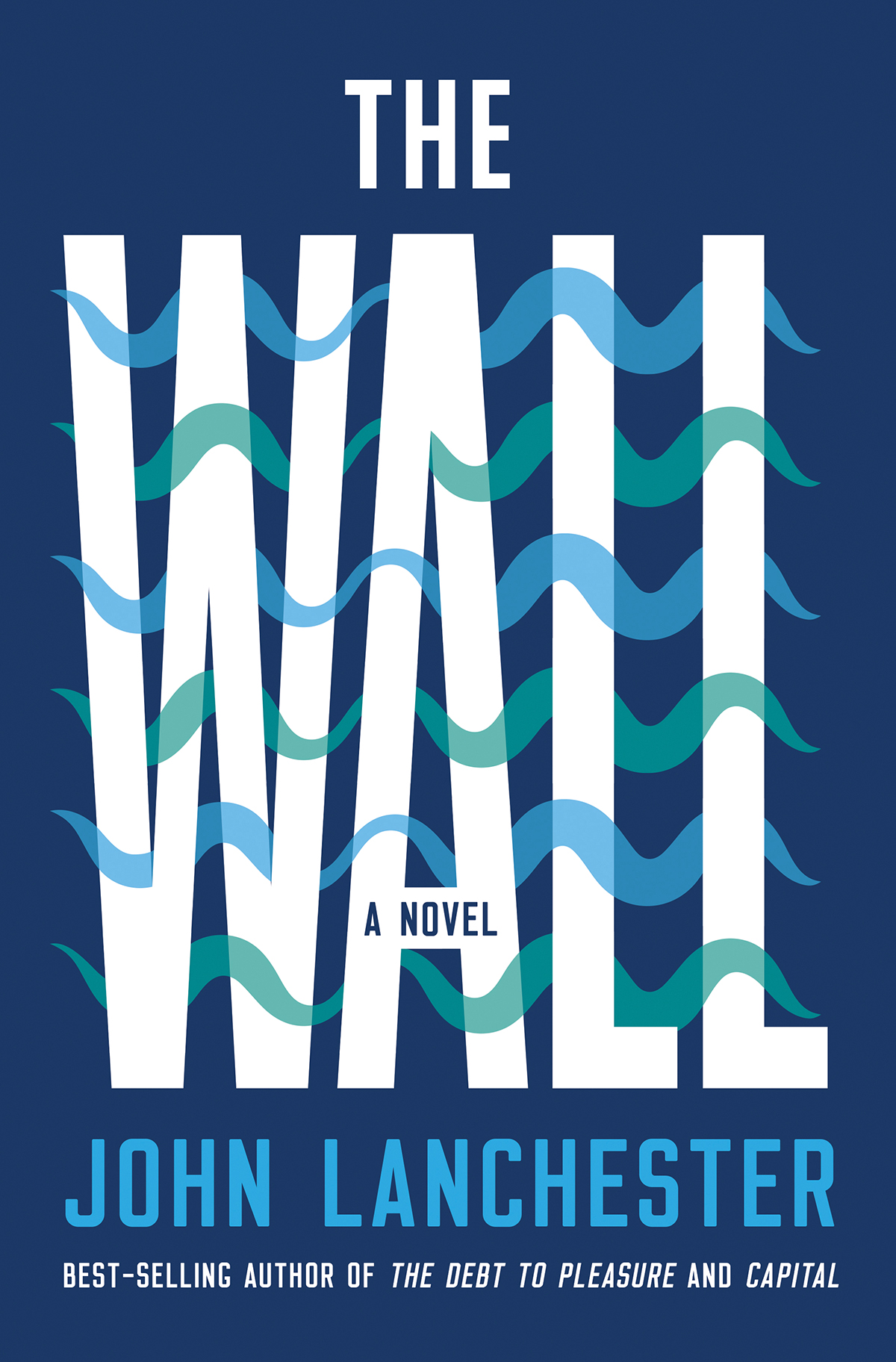 “Defenders” stand guard on the Wall, officially known as the National Coastal Defense Structure. Some opt to become “Breeders,” who get a few extra benefits in reward for keeping the species going (under these bleak circumstances, not many want to). Refugees caught breaching the Wall are either euthanized, put back out to sea, or turned into the “Help,” effectively slaves.

The narrator, a young Defender named Kavanagh, is no hero. He’s mostly oblivious to the twisted setup of his society, although he knows enough to hate his parents for ruining everything. (In this time and place, the kids hate the “olds.”) He longs to join the ranks of the ruling “Elite,” the ones who own the place.

It’s one of a crop of recent books about our climate crisis, including David-Wallace Wells’ The Uninhabitable Earth, a harrowing description of our hellish future, Dahr Jamail’s The End of Ice, a firsthand look at hotspots around the world, and Nathaniel Rich’s upcoming Losing Earth, an account of how our politics helped get us into this mess.

Ahead of a Town Hall book talk at Seattle University, I sat down with Lanchester backstage to hear about the bleak lexicon he created, the role of fiction in coming to terms with climate change, and how he feels about getting compared to greats like George Orwell (“I blush at it, mainly”). Our conversation has been condensed and edited for clarity.

Q. Did you set out to write a book about climate change?

A. I was part way through writing another novel and started having this recurring dream. It was about a figure on a wall at night. I started to think about who that person was, and then realized that the real question was “What world is he living in?” It was a world after catastrophic climate change. And that was the premise.

Q. The language in the book felt simple and almost understated to me. Was that your intention?

A. The Change is basically a world with about 4 to 5 degrees C [7 to 9 degrees F] of global warming. I was trying to imagine what would that be like. It occurred to me if you look at a map of world with that degree of warming, perhaps you could see the scale of it, and the pervasiveness of it, and the way it would penetrate every aspect of life. It would be like living through a world war, except where the climate’s the enemy, not whoever you’re actually fighting.

And that generation who lived through the world war, parents and grandparents, it’s clear that a lot of what happened emotionally was a kind of closing down and getting through it. There was a sort of stripped down, constrained, survival-first sense of life. I wanted that to be reflected in the language, a language that is pared down, and has no flourishes, and is deliberately blunt and slightly affectless.

Q. How do you feel about the comparisons between your book and George Orwell’s 1984?

A. It was a long time since I’d read 1984, but I have read it since, partly because it kept coming up. People kept saying “dystopia this, dystopia that.” I thought rather than bluffing my way through it, I’d have a look at it.

Orwell’s book is absolutely soaked in atmosphere of the ’40s. You can almost smell the boiled cabbage and that sense of deprivation, grayness, and endurance — a kind of permanent cloud overhead. That struck me as very much a wartime thing and a kind of emotional connection.

But there are profound differences in terms of conception and construction, because I think Orwell was looking away. He was writing about the thing that already existed: He’d seen totalitarian mentality, especially in Spain when he encountered the Spanish Civil War. He understood it firsthand and from the inside. It’s less an imagined future.

The other dystopia I read in parallel with it was Aldous Huxley’s Brave New World, which is much more of an attempt to project things into the future. It’s astonishing how many things he was onto. He was onto genetic engineering, this world run by data, and entertainment as a way of numbing your brain, switching your brain off. Those are amazing things to see in 1932.

Q. After reading your book, I couldn’t help but see some of its ideas in the news. This month’s Youth Climate Strike reminded me of one theme — the resentment that young people hold against older generations.

A. It’s been very interesting to see that coming out more in the world, because I started writing the book in early 2016. I think it’s a very positive development. You can see a generational flip in the inadequacy of the political response to it. You saw it with Theresa May, with Dianne Feinstein: The children are like the grown-ups, and the grown-ups are the people who don’t get it and are being morally trivial.

In terms of the book, I was imagining this super-grim version of the Change. In two generations, or even one generation, you’d have people who effectively grew up on a different planet.

Q. The other theme from your book I’ve been seeing was the reluctance to have kids because of climate change.

A. I was so struck a couple weeks ago by BirthStrike. I must admit, I did do a double take when I saw that. The kids’ strike, BirthStrike, and Trump’s wall — I often say, my main ambition for the book is to be wrong, to try and stop it happening by describing it. But unfortunately I’m not wrong yet.

Q. Did you do a lot of research for the book?

A. I’m quite wary about research because I think you often end up putting it in a novel even if it doesn’t really belong. I tried to imagine what this world was like and then occasionally, if I needed to, go look things up.

Q. Do you think that helps you avoid coming off as pedantic?

A. I think that’s one of the risks, particularly in speculative fiction or fiction set in an alternate reality. You can go down this trap of inventing something clever and then explaining how clever you’ve been. Some of the stuff about what the characters refer to as the Change — about the elite, the society, the way politics functions, things like that — I sort of imagined it and then left the backstory out. You can sense a texture of something that is there in the imagined world even if it’s not directly described. It gives you a sort of three-dimensionality.

Q. What role does fiction play in helping us come to terms with what’s happening? Facts obviously aren’t reaching everyone right now.

A. I obviously don’t agree with it, but I find denial very easy to understand. If we could deny it, that’d be great. If it wasn’t true — fantastic!

It’s very, very hard to look it in the eye and accept the scale of what we’re doing. So that, in a way, is exactly why it came out of a dream and turned into a novel. For me, having it presented in the form of a story makes it easier to process. If we could actually see what was happening, then there’d be much more agreement, about not only what’s happening, but about the necessary urgencies.

I think fiction is just a way to try and sneak under the radar. That’s the thing James Baldwin said — the main way writers change the world is by changing the way people see the world.