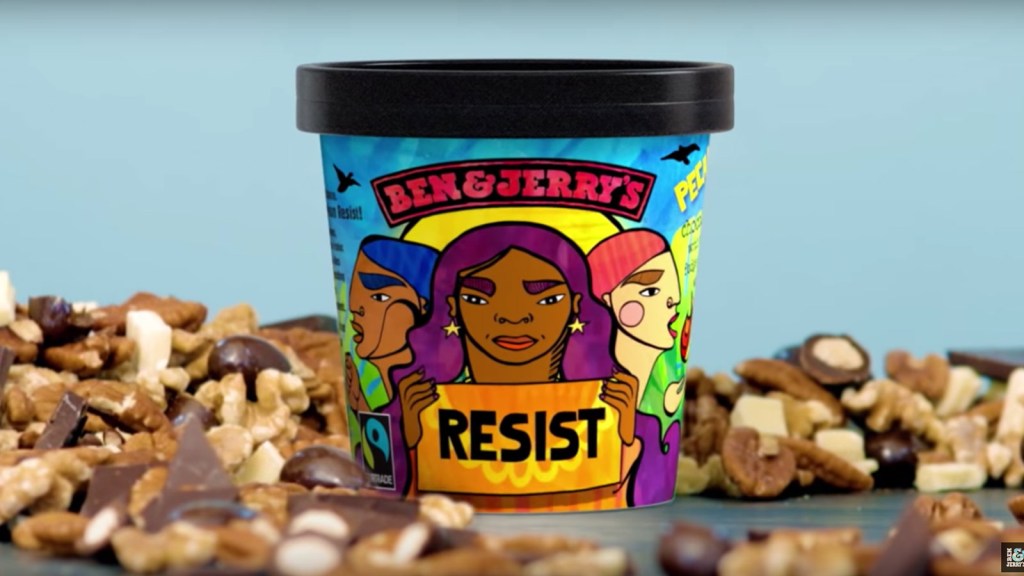 What a week: 11 people dead in Pittsburgh, the election of the Trump of the Tropics, fear mongering over migrant caravans, and a sudden push to end birthright citizenship. Wait, it’s only Tuesday? If you’re in need of a midweek pick-me-up, the folks over at Ben & Jerry’s have a new flavor for you: PECAN RESIST (those guys love a good pun, bozos after my own heart).

The company is using the flavor to raise awareness and money for organizations that combat Trump’s agenda. Ben & Jerry’s announced it’s banana splitting $100,000 between four social justice and environment groups: Color Of Change, Honor the Earth, Women’s March, and Neta.

Today we launch Pecan Resist! This flavor supports groups creating a more just and equitable nation for us all, and who are fighting President Trump’s regressive agenda. Learn more and take action here >> https://t.co/Bi8YE1FvOZ pic.twitter.com/Kr6CKBX1sc

The new flavor, by the way, is chocolate ice cream with chunks of fudge, fudge-covered almonds, pecans, and walnuts. The pint’s art was designed by Favianna Rodriguez, a member of the 2018 Grist 50, who runs her own nonprofit, CultureStrike. In a Q&A, Rodriguez told Ben & Jerry’s that she wanted the colors on the carton to “invoke the natural world.” She added: “Our fight for the environment is connected to our fight for human rights.”

Look, I’m not saying that buying a pint of ice cream will single-handedly stop Trump. But, if you feel like ice-screaming after reading these headlines from hell, do so responsibly.

And, since Ben & Jerry’s seems to be doubling down on politically themed ice cream flavors, we have some ideas: Down With the CaramAlt-right!, Half Baked at 1.5 Degrees, Cherry-pickin’ Climate Data Garcia, Something’s Phishy about Georgia’s Voter Registration.