These Republicans say they’re ready for climate action. Can we believe them? 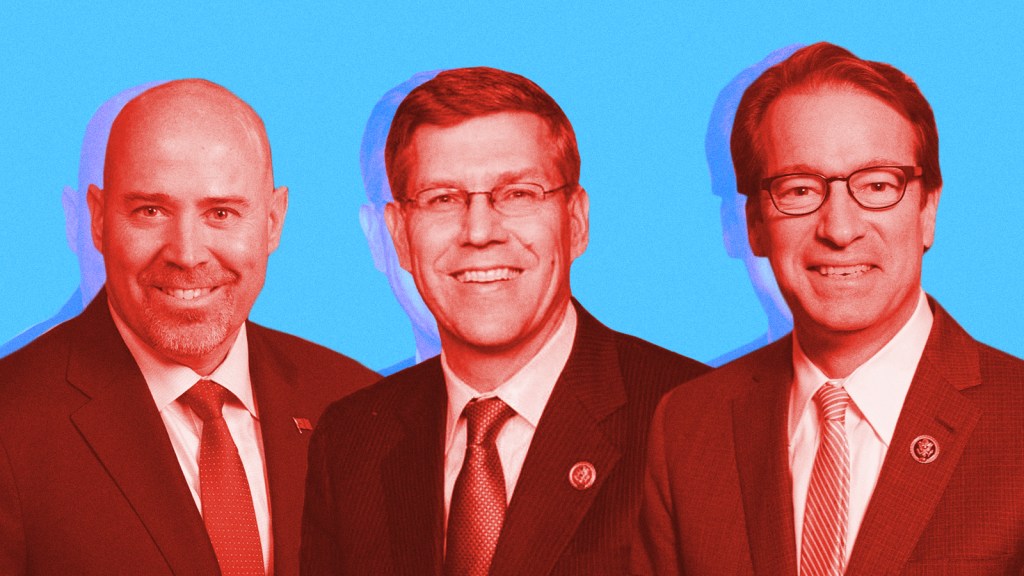 These Republicans say they’re ready for climate action. Can we believe them?

Three Republican representatives — Tom MacArthur of New Jersey, Peter Roskam of Illinois, and Erik Paulsen of Minnesota —  just joined a bipartisan climate change caucus. Given their voting records on environmental matters, these guys are unlikely messengers for climate action. But hey, this is 2018, and the climate will take what it can get!

The Climate Solutions Caucus was founded in 2016 by two Florida lawmakers, Democrat Ted Deutch and Republican Carlos Curbelo. The group has expanded to 78 members since then — a solid 18 percent of all House representatives. (By rule, a Democrat can only join if a Republican does too.)

But the requirements for joining the Climate Solutions Caucus are a bit wishy-washy. It’s become a safe space for House Republicans who want to “‘greenwash’ their climate credentials without backing meaningful action,” as Mother Jones’ Rebecca Leber and Megan Jula write.  The average Republican in the caucus voted in favor of the environment just 16 percent of the time last year, according to the League of Conservation Voters. (House Democrats averaged 94 percent.)

Many of the new Republican members are fighting for their seats in competitive districts, according to the Cook Political Report — including MacArthur, Roskam, and Paulsen. The theory is that these incumbents may want to distance themselves from Trump’s brand of climate denial right before election season.

As for whether joining the Climate Solutions Caucus marks a turning point in their careers or an empty badge of honor, only time will tell. Here’s how the newest Republican members have approached climate issues in the past.

Like many other Republicans, MacArthur doesn’t want his state’s shores ruined by Trump’s offshore drilling plan.

“My district is home to the heart of the Jersey Shore, Barnegat Bay, the Pine Barrens, and the Delaware River,” MacArthur said in a press release about joining the caucus. “Climate change and other environmental issues directly impact our area and our South Jersey economy.”

On other environmental issues, MacArthur’s record isn’t as clean. He recently voted to exempt coal plants from meeting certain clean air standards and delay public health protections against toxic pollution from brick manufacturers. He voted for environmental legislation just 23 percent of the time last year, according to LCV.

But at least he’s spoken up for climate change before. After President Trump announced his intent to withdraw the U.S. from the Paris Agreement last summer, MacArthur responded on Facebook: “Climate change is a critical issue and it is vital that we act as good stewards of the environment.”

Then there’s Roskam — the Illinois representative who earned a jaw-droppingly low score of 3 percent from LCV last year. What’s he doing in climate-friendly territory?

Roskam reportedly called global warming “junk science” in 2006, and his opponent in Illinois’ 6th District race, scientist Sean Casten, is giving him hell for it. Casten, who’s making climate change his main issue, is quick to point out that Roskam voted to prevent the EPA from regulating greenhouse gases and voted against renewing tax credits for people who install solar panels on their homes or buy electric cars.

Here’s Roskam’s version of why he’s signing up: “It is incumbent upon each and every one of us to understand the impacts and challenges that come from a changing climate. The Climate Solutions Caucus is a bipartisan venue to enact common sense solutions.”

When a reporter asked Paulsen in 2008 if he believed humans were contributing to global warming, he said, “I’m not smart enough to know if that’s true or not.”

Maybe he’s gotten smarter since then. A bunch of Winter Olympians, including Minnesota’s cross-country gold medalist Jessie Diggins, met with Paulsen last month to express concerns about climate change’s threat to winter sports and urge him to join the Climate Solutions Caucus. Paulsen is an avid skier who only voted in the environment’s favor 14 percent of the time last year.

“I’m proud to team up with both Republicans and Democrats on ways to protect our country’s economy, security, water supply, and environment,” he said in a statement about joining the caucus.

That statement suspiciously lacks any mention of climate change, but you know. Baby steps.