Tiny glass beads might seem an unlikely hero in the fight against climate change, but they may end up playing an outsize role in tackling one of the natural world’s most dire predicaments. A group of researchers have found that millions of these spheres spread in a layer across swaths of Arctic ice reflects sunlight and helps keep the ice frozen.

Glaciers, polar land, and sea ice are rapidly melting, much faster than many scientists expected, as the Intergovernmental Panel on Climate Change’s (IPCC) report on oceans and the cryosphere released Wednesday reiterated. During a five-day heat wave this summer, Greenland lost more than 60 billion tons of ice, including the biggest loss in a 24-hour period since record-keeping began. Recent projections warn that Arctic summers could be nearly ice-free in 10 to 40 years. Arctic ice levels are both a primary indicator of rising global temperatures and a key determinant of how bad climate change might get. Serious ice loss means sea levels rise, more heat is absorbed by the ocean and planet, and weather and ocean currents could change.

These grim warnings have prompted more researchers to apply technological solutions that intervene in the earth’s climate systems to slow the impacts of global warming, also known as “geoengineering.” Last week, leading up to the United Nations Climate Action Summit on Monday, a contingent of climate organizations partnered with the U.N. to host the First Annual Global Climate Restoration Forum to discuss geoengineering solutions. While climate engineering was previously considered too far-fetched, risky, or controversial, more people are now seeing the strategy as a necessary piece of the puzzle.

“We’re getting much more attention because of how dire thing are,” says inventor and engineer Leslie Field, founder of Ice911, a nonprofit exploring Arctic ice restoration who featured prominently at the climate restoration conference and in the strategic report organizers released.

“The ice melting is a critical game changer that we need to stop as fast as possible,” says Rick Parnell, CEO of the Foundation for Climate Restoration, the organization behind the forum at the U.N. One 2018 report concluded that geoengineering polar glaciers would slow sea level rise and buy significant extra time to tackle climate change. “Stopping Arctic melt is key,” Field says. “This shouldn’t be an afterthought.”

In 2006, Field saw Al Gore’s climate documentary An Inconvenient Truth. She couldn’t stop thinking about her two young children and the future they faced. But rather than despair, she decided to get to work. Field calls her idea “an embarrassingly simple concept.” Warmer temperatures have reduced the bright white multiyear ice (essentially thicker, stiffer ice) in the Arctic, and the resulting loss in light reflectivity leads to heating and further ice melt. “I just asked myself a very simple question: Is there a safe material that could help replace that lost reflectivity?” Field says. The answer, her team found, was to add a very thin layer of hollow glass spheres made of silica, the main component of most rocks, that reflect light and “make very thin ice look a lot more like multi-year ice.” 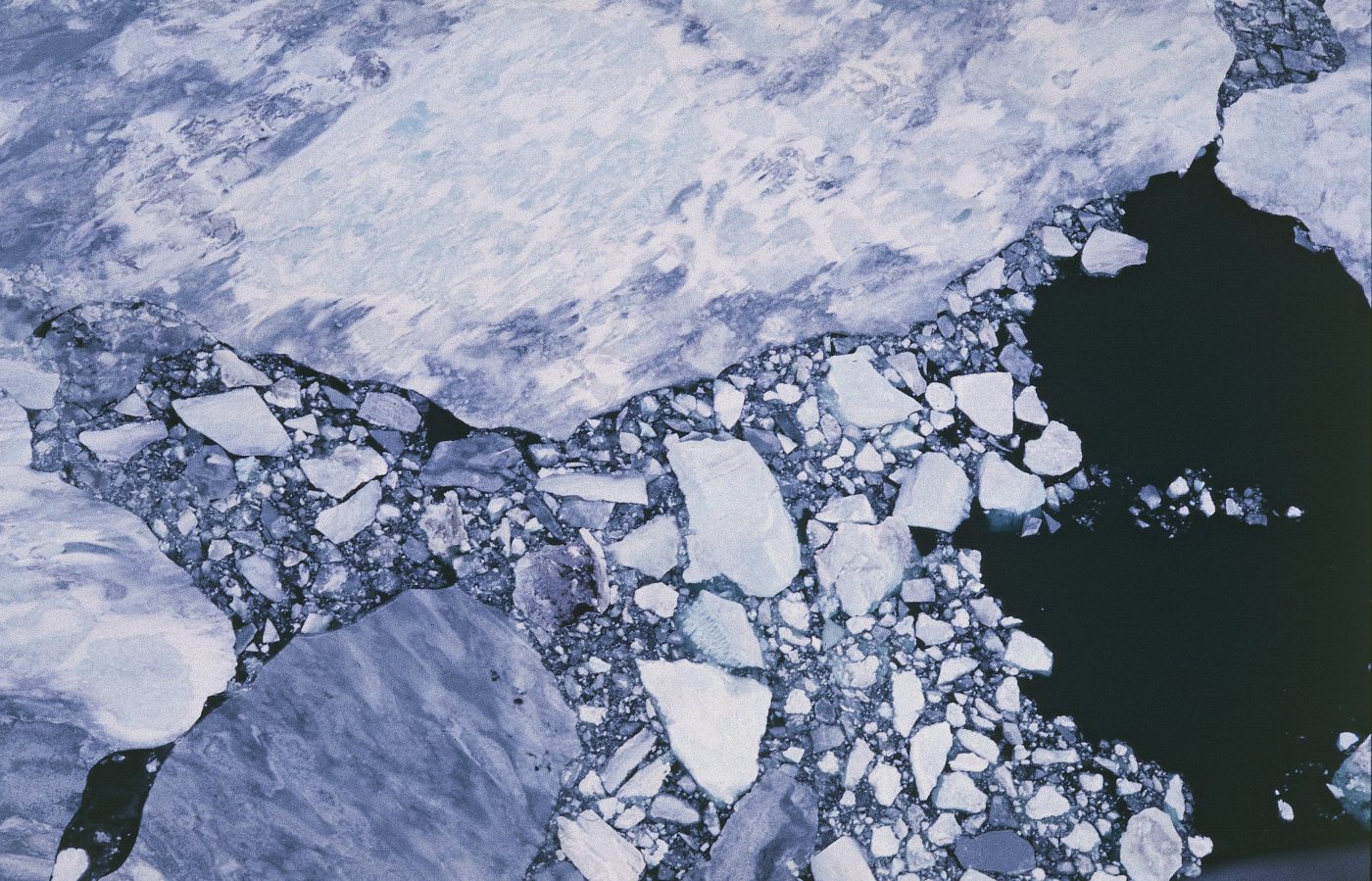 Ice911 isn’t the only ice restoration project out there. People have proposed building underwater walls to prop up glaciers and boring cold water tunnels under ice to help thicken it. Chinese researchers are investing billions into polar research over the next decade, including feasibility testing for various geoengineering solutions.

But Ice911 is one of the furthest along. Last year, the team covered almost 18,000 square yards on lake ice in Utqiagvik (previously Barrow), Alaska, for pilot tests. While they work on permitting with the Environmental Protection Agency for testing on sea ice, they are collaborating with NASA on modeling.

The results so far are encouraging. In May 2018, the team published a peer-reviewed paper in the American Geophysical Union’s Earth’s Future journal, revealing the results and projections of their initial pilot testing. In one field test, the material increased reflectivity by 15 to 20 percent. Their models have predicted the beads could significantly stop ice decline and even reverse it. Simulations showed a potential 1.5 degrees Celsius temperature reduction over a large part of the Arctic, a 3-degree sea temperature reduction in some areas, and an increase in sea ice thickness of up to 20 inches.

Compared to other ice restoration ideas, Ice911’s approach is relatively small-scale. Rather than try to blanket the entire Arctic, the team wants to target specific areas that modeling determines will have the biggest restorative impact. Led by a guiding principle of “do no harm,” Field says “the whole idea is minimal intervention for maximum good.”Safety testing of the silica beads by the manufacturer and an independent lab has yet to turn up any negative effects for humans or animals.

That doesn’t mean the project is without criticism. Adrienne Titus, an Inupiaq organizer in Fairbanks, Alaska, has raised concerns about the unknown environmental consequences of spreading glass beads all over the ice. Arctic explorers and oil drillers — who historically rarely consulted native communities — have made many indigenous groups wary of intervention. That’s part of why Field is currently focused on engaging governments and native communities, trying to spur conversations about the necessary governance policies and oversight required before any such project can be deployed at a large scale. Ultimately, Field argues, “it’s an even bigger change to the ecosystem to allow the ice melt to continue and not do anything about it, then it would be to make a mild intervention.”

Some climate scientists and policymakers feel the financial resources required to execute these projects at scale — Ice911 estimates its project would cost up to an estimated $5 billion, and other projects would cost much more — would be better used on tried-and-true methods of climate change mitigation.

“A much more efficient way of using funding nowadays would be to subsidize electric cars and solar panels and other alternative energy sources [and] research on electricity storage,” says Slawomir Tulaczyk, a glaciologist at the University of California Santa Cruz, who has been working in the field for over two decades. While he is personally intrigued by ice engineering work, “these would be probably more realistic investments that are more likely to result in the outcome you want than what would be associated with going to Greenland and Antarctica just to test,” he says.

Perhaps most indicative of the tricky space in which climate restoration exists is the field’s persistent moral hazard problem: Some environmentalists fear that people will ignore the causes of climate change if they think they can engineer their way out of it. Senator Bernie Sanders has called geoengineering a “false solution.” Indeed, fossil fuel companies have ducked addressing climate change by framing it as simply an engineering issue, as former Secretary of State and Exxon CEO Rex Tillerson has repeatedly claimed.

Field is familiar with this argument. It was her main hesitation in publicizing her project at first. But as climate disaster looms, she and others see a pressing need to attack the problem from all angles. Even international organizations like the U.N. and the IPCC have been signaling more openness to climate engineering ideas, for instance by participating in the climate restoration conference and referencing the potential usefulness of such methods in reports.

“We never have intended nor could we replace the need to do emissions reduction and get sustainable energy sources in place,” Field says. “This is part of a much larger picture that needs to happen, but it’s an essential part. As far as we can tell, this is the largest single lever that one could safely address on climate change right now.”