These scientists found 2,500 years of economic history frozen in ice 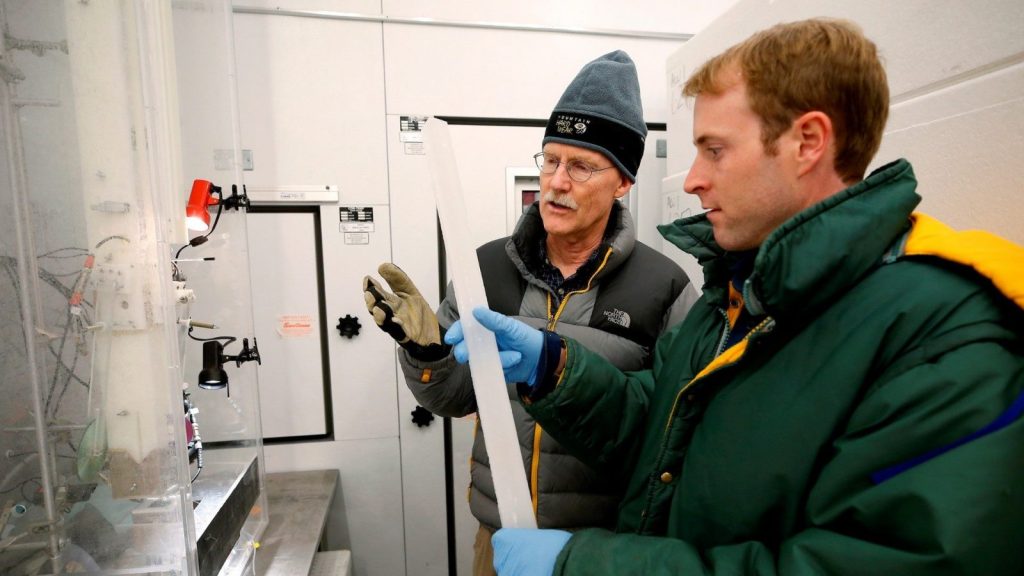 Joe McConnell (left) and Nathan Chellman, both members of the research team, in the freezer with an ice core. Desert Research Institute
on the lead record

These scientists found 2,500 years of economic history frozen in ice

You don’t have to be a rocket scientist to guess that the Black Death — the plague that killed at least one-third of Europe’s population during the Middle Ages — wasn’t great for the economy. But to pinpoint how long that economic decline lasted, you could ask a climate scientist. (It was about 100 years.)

It turns out that if you go far enough north, all the way to the remote, freezing Arctic, climate science can tell you a lot about history. The gigantic ice sheets at the Earth’s poles didn’t just suddenly appear one day — they built up over tens of thousands of years, capturing pockets of air and chemical traces of the environmental conditions of the Earth at the time the ice froze. And since humans have been polluting the air for a very long time, there’s a record of our economic activity frozen in the icy depths.

A recent study published in Proceedings of the National Academy of Sciences tied the rise and fall of lead in Arctic ice samples to economically significant historical events over the course of the last 2,500 years, from the Roman Empire to the present. Climate scientists and historians worked together to conduct the research, using data from 13 ice samples taken from different regions around the Arctic.

Atmospheric lead pollution and economic growth shared a “direct link,” said study coauthor Nathan Chellman, because of lead’s ties to money. Production of precious ores used for currency, especially silver, was pretty much the only source of lead pollution for many centuries.

“There weren’t many major technological changes in mining and smelting processes during the Middle Ages and in the Early Modern period, so we were able to see a lot of the linkages to historical events,” said Chellman, a hydrologist at the Desert Research Institute in Nevada.

For most of history, wars and plagues corresponded with economic decline. That translated into dips in lead levels in the ice that formed during those years. Periods of growth and prosperity, on the other hand, were marked by increasing levels of lead pollution. That shifted into overdrive in the mid-1700s, when the Industrial Revolution brought rapid technological developments.

Societies might use dollar bills and credit cards now instead of silver drachmas, but that doesn’t mean our atmospheric lead levels have gone down since the Industrial Revolution. On the contrary, they’ve skyrocketed from manufacturing, lead paint use, and burning fossil fuels like coal and leaded gasoline.

While industrialization made the ice samples more complex to read, there were still some events that clearly registered. Lead spiked during World Wars I and II, probably prompted by the rapid uptick in the manufacturing of tanks, planes, and arms, while the economic decline that occurred during the Great Depression caused lead levels to crater.

Lead pollution topped out near the end of the 20th century thanks to the 1970 Clean Air Act, which banned leaded gasoline, among other pollutants. The result: an 80 percent decrease in atmospheric lead levels, according to Chellman’s team’s findings. There’s still 60 times as much lead in the atmosphere as there was during the Middle Ages, but it’s evidence that regulatory measures are working.

“It’s pretty encouraging, really,” Chellman said. “It’s not great that it’s still a lot dirtier than it was before, but the fact that the legislation had such a visible impact on the lead record is pretty neat.”

Chellman and the others hope to continue comparing historical records with the environmental record even further back in time, to see what pollution frozen in the ice might reveal about Iron and Bronze Age societies.

Unfortunately, all those fossil fuels humans have burned over the years didn’t just change the amount of lead in Arctic ice. It’s also made the Earth on average about 1 degree C hotter in the last century, with more warming on the way, threatening the ice itself. It will likely take thousands of years for the polar ice caps to melt entirely — current warming trends pose an immediate threat to sea ice and small glaciers.

But if nothing else, Chellman’s research emphasizes how our behavior can change the planet. “It really just goes to show how much of an impact humans have had on even remote environments, like the Arctic, over the last two and a half millennia,” he said.