These shops will sell you shampoo, but it's BYOB -- bring your own bottle 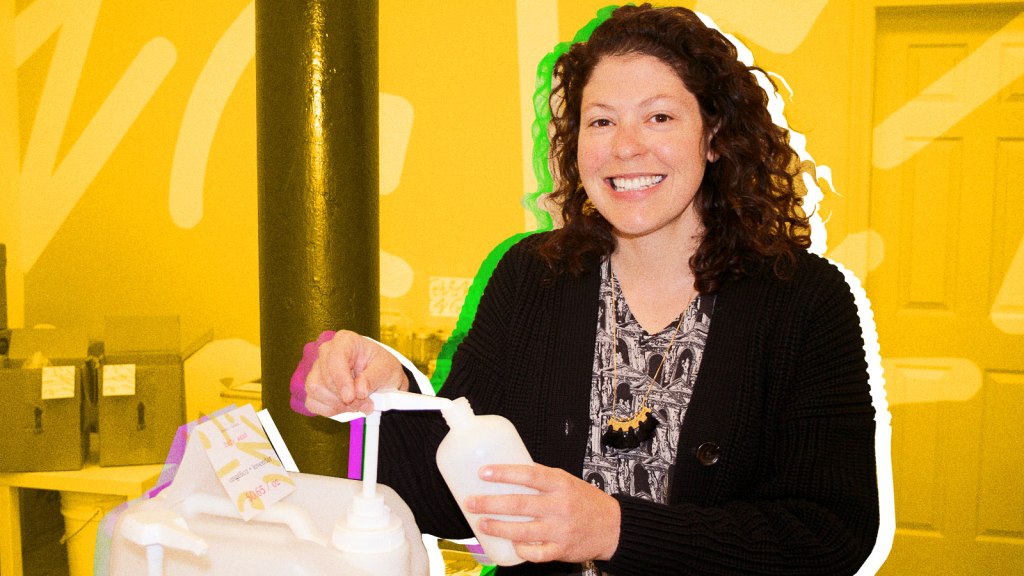 These shops will sell you shampoo, but it’s BYOB — bring your own bottle

Glance too quickly at 89A Norfolk Street in Cambridge, Massachusetts, and you might think it’s a hip city boutique. The bright yellow color scheme is designed to pull you in off the street. The furniture is artfully mismatched. Inside, the proprietor, Sarah Levy, is chatting up customers and playing soft electronica.

But look a little closer, and those new-school aesthetics give way to an old-school concept. That jumble of used art supplies in the corner is not an elaborate window display, but a form of space-sharing with another local store. The shelves, tubs and chairs are genuinely secondhand. And that couple bent over the center table like they’re examining a pricey bracelet are actually working together to pump liquid soap from a large drum.

Levy describes her shop, Cleenland, as a “low-waste, no-shame” household and personal care products store. It’s a well-packaged shop that eschews packaging. It sells bulk soaps, shampoos, and detergents by the ounce, along with reusable or low-impact versions of products that are usually one-and-done: refillable deodorant tubes, compostable picnic cutlery, skeins of floss housed in small glass bottles …

The idea is to send customers home with things that they need, like shampoo and floss, without the things that they don’t, like brand-emblazoned bottles and the fiddly plastic dispensers that most floss comes in.

According to the EPA, containers and packaging made up nearly 30 percent of the total solid waste generated in 2015. Just over half of this was recycled — the rest ended up in landfills, drifting along roadsides, or making up some of the tens of millions of tons of plastic currently marinating in the oceans. Rather than worrying about how to best dispose of them, what if we simply didn’t use so many wrappers, bottles, and other such stuff-holding stuff in the first place?

That’s the logic behind the waste-reduction movement currently manifesting in a number of ways, from the expanding popularity of bulk and low-waste grocery stores to the plastic bag bans that have gone into effect in eight states and dozens of cities and towns.

Levy has long been personally committed to low-waste shopping. She’s used to bringing tote bags to grocery stores and thrifting her furniture and clothes. But finding packaging-free cleaning and personal care supplies was a consistent point of frustration, even though they’re “a huge source of plastic waste in people’s individual lives,” she says.

When she heard about The Soap Dispensary — a broad-scale refill shop that opened eight years ago in Vancouver, British Columbia — she decided the Boston area needed something similar. (While Cambridge has a number of bulk food stores and farmers markets, as well as some personal care stores that actively minimize packaging, Cleenland is the first shop of its kind in the area to bill itself specifically as low-waste.)

After about six months developing the concept, Levy quit her job at a local 3-D printing lab and founded Cleenland. In some ways, she says, “I opened the store to be my own supplier.”

She’s not the only one. “Every day I hear about more and more stores popping up,” says Linh Truong, The Soap Dispensary’s founder. “Weekly, I get inquiries from people wanting help to open up their store, or [asking] to franchise [mine].” (Other recent American examples include Denver’s Joy Fill, Minneapolis’s Tare Market, and Brooklyn’s Package Free Shop.)

For customers, though, there’s a learning curve. “Nobody knows really what this store is,” Levy says. “They don’t really have a point of reference for it.” Five months in, for every one person who sweeps in confidently with a bag full of empties — or comes in already using terms like “low-waste” — there are four or so newbies, she estimates.

So Levy designed the shop itself to get them up to speed. Onboarding starts with the outside window, which lays out the weigh-and-pay system. Go inside to browse, and you’ll find a battalion of helpful notecards, explaining everything from the provenance of each cake of wrapperless soap to the difference between a regular old ounce and a fluid one.

And then there is Levy herself. As the store’s mastermind (and only employee), she’s always ready to talk through a stocking decision, take a product suggestion — or bring over a towel when someone gets a little overzealous with the soap pump, as that couple eventually did. One recent Sunday, Levy explained toothpaste tabs to a dad who had brought in his baby and an empty Suave container, and recommended hair care products to a passerby who had ducked in off the street.

And when a woman tentatively asked if she could refill a box, rather than a bottle, with laundry detergent, Levy responded with her favorite phrase: “Hell yes.”

That’s where the “no-shame” part of the store’s descriptor comes in. “I find a lot of rhetoric around low-waste and zero-waste stuff to be pretty condescending,” Levy says. “That’s just not my theory of change.” Instead, she says, she focuses on making people feel welcome, both in the store and in the movement, and getting across “that it’s attainable and doable for them.”

This means keeping the store open until 8 p.m. on weekdays so that people can stop by after work, and setting a shelf aside for take-one, leave-one vessels, in case someone comes in with a dire need for dishwashing powder and nothing to house it in. Sometimes it also means stocking things Levy didn’t originally plan to, like garbage bags, in order to better “be a one-stop shop,” she says. (The bags are 90 percent post-consumer recycled plastic.)

Perhaps most importantly, it involves a commitment to communal education alongside regular old sales — and that includes not just the packaging, but the stuff customers put in it. Like most proprietors of similar stores, Levy takes a number of things into account while choosing products, from how far something will have to be shipped to the ethical practices of the company that produces it.

She is as transparent about these considerations as the glass bottles she sells. She has a list of verboten ingredients on her webpage. When Biokleen — which had been one of her main suppliers — was recently acquired by the conglomerate Weiman, she stopped buying from them, as they were no longer “in line with our environmental and labor values,” as she wrote in a note to customers.

It’s this level of concern that she really hopes her customers will take home with them, and apply to other areas of their lives, while they’re washing their own hair and and countertops. “Definitely this stuff matters,” Levy says. “But what matters more is becoming more aware of how we use resources in general.” Contemporary look, throwback approach, timeless lesson.