This company wants to make steel and cement with solar power. Here’s how. 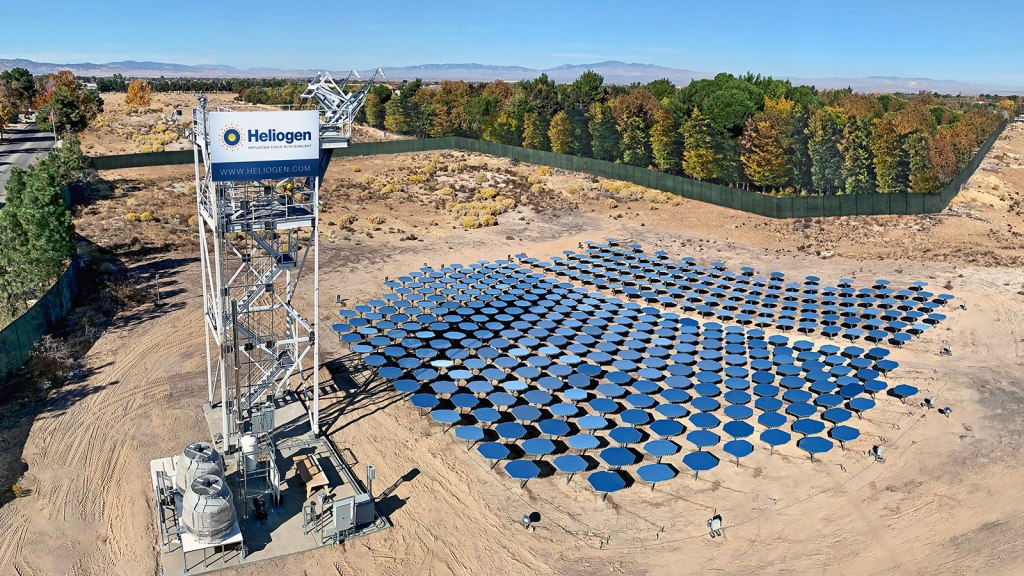 Heliogen
mirror mirror on the ground

This company wants to make steel and cement with solar power. Here’s how.

Many of the industrial processes underpinning modern civilization rely on dirty energy for the simple reason that it’s a great source of heat. To make steel, you need to smelt iron ore at 1,100 degrees Celsius (2,012 degrees Fahrenheit); to cook cement, your kiln needs to reach 1,450 degrees C (2,642 degrees F). To form molten glass from silica, the heat must be cranked even higher. Whatever the application, the most efficient way to reach these temperatures is to burn fossil fuels.

But what if we could use heat from the sun instead?

That is the bold proposition put forth by Heliogen, a small clean-energy company based in Pasadena, California, that rocketed into the national spotlight last week when it announced it had developed an array of solar mirrors capable of concentrating sunlight in order to build enough heat to reach temperatures exceeding 1,000 degrees C (1,832 degrees F). Heliogen wants to integrate its tech into industrial processes like cement production, and if it can do so at a reasonable cost, so-called solar thermal technology might help mop up the billions of tons of carbon emissions associated with industrial heat production each year. But right now, that’s a big “if.”

The concept behind solar thermal technology is deceptively simple. Sunlight is captured and focused into either a long, pipe-like tube or a tower-mounted receiver to generate heat, like the supersized version of a kid frying a bug under a magnifying glass. Typically, that heat is stored in a “working fluid,” like molten salt, which is used to produce steam that drives an electrical generator. Concentrated solar thermal plants, or CSPs, that bottle the sun’s heat to make electricity in this manner have been around for decades, but they’re typically designed to operate at temperatures below 600 degrees C (1,112 degrees F), explained Mark Mehos, CSP program manager at the National Renewable Energy Laboratory, which runs under the auspices of the U.S. Department of Energy.

Heliogen has a different goal in mind. It wants to skip the electricity-producing step and use solar heat to power industrial furnaces directly. To do so it needs to crank the temperature much hotter, and while this is already achievable with conventional technology, the company says it’s found a way to build extreme levels of solar heat more efficiently and reliably than before. Its secret sauce? Using a sophisticated computer system to focus its mirrors with unwavering accuracy.

“We’re using massive-scale image processing,” said Heliogen CEO Bill Gross. He explained that his team took advantage of recent advances in graphics hardware for video games to build a system capable of training a two-acre field of sun-tracking mirrors on a tower-mounted receiver that looks not much larger than a basketball hoop.

Gross says Heliogen can reliably achieve temperatures upwards of 1,000 degrees C in a 250 kilowatt array — which he described as the company’s “full-scale commercial-size” product — with the idea that multiple arrays could be installed in tandem to increase their power output. While Gross wouldn’t disclose how much a single array would cost to build, he said that Heliogen will either sell industrial manufacturing companies solar arrays outright, or raise capital to build arrays on industrial manufacturing companies’ land and then sell them the heat. Engineering firm Parsons Corporation has partnered with Heliogen to do the actual building.

The first industry Heliogen has set its sights on is cement, which alone is responsible for a staggering 8 percent of humanity’s carbon emissions. The process of making cement involves heating a mixture of limestone and other ingredients to 1,450 degrees C , a temperature that Heliogen’s mirrors can’t reliably achieve yet. But the first step in the cement-making process — the so-called pre-calciner stage — only requires temperatures of around 900 degrees C. And it’s at that stage that most of the carbon emissions occur, both from the fossil fuels burned to generate heat and the conversion of limestone into lime, which releases CO2.

Gross says his technology can reduce or eliminate the fossil fuel part of the equation by baking limestone in an oven that’s heated directly by the sun. (The team has already melted some limestone with its test array to prove it can be done.) His next bold proposition: Doing so will make it easier to capture and sequester the carbon emissions associated with converting limestone to lime.

“Normally when you’re burning fossil fuels to heat limestone, all of the fossil fuel exhaust is mixed with the limestone exhaust,” Gross said. “And it’s hard to capture [the carbon] because you have to separate it from everything else.” If the other gases associated with coal burning could be eliminated, and all that was coming out of cement kilns were CO2, capturing that carbon would in theory become trivial.

Heliogen’s general idea makes sense, said Rebecca Dell, an industry strategist with the nonprofit ClimateWorks. But there are some important constraints to keep in mind. The technology is only going to work in sunny places, meaning cement factories in the Pacific Northwest probably aren’t going to convert to solar anytime soon. What’s more, most cement kilns require power on the scale of megawatts, not kilowatts. In order to substantially cut industrial heat emissions, a commercial cement plant likely will need to network several Heliogen arrays together. And doing that will require land, perhaps a lot.

“Often there’s a big plot of land around a cement kiln,” Dell said. “But whether or not that land is flat, whether or not it’s sunny? It might not be big enough, it might be forested. There’s a lot of reasons why the land availability might become a concern.”

Caveats aside, Dell praised the company for its focus on finding cleaner ways to produce industrial heat, something she said was “very much welcome.” Mehos, from the National Renewable Energy Laboratory, added that applying solar thermal tech to industrial heat is a “novelty” and said he’ll be interested to see how it works in practice.

For a company that still has a lot to prove, Heliogen has lofty ambitions. Gross said his team is aiming to work its way up to reliably achieving temperatures of 1,500 degrees C (2,732 degrees F) with its solar mirrors, at which point the entire cement production process could in theory be sun-powered. At those temperatures, he said, the team could also unlock another industrial process: splitting apart water molecules to make hydrogen, a liquid fuel that emits no carbon when it’s burned. Today, hydrogen fuel is typically made at lower temperatures from natural gas in a process that generates CO2. But by breaking the bonds in water, a truly carbon-free liquid fuel could be made — assuming there’s a clean, affordable way to generate the heat needed to do so.

“That would be the holy grail,” Gross said.

While Heliogen’s engineers (and others around the world) continue to chase that holy grail, cement producers seem to be eyeing the new solar thermal tech with interest. Gross said Heliogen has been contacted by dozens of companies in the past week, and that it’s is hoping to announce its first commercial partner soon.

Perhaps, in the not-so-distant future, construction workers will be pouring fresh pavement that was literally cooked up by the sun. Dare to dream.