This influential group behind the Halliburton loophole doesn't lobby. So why did it hire a lobbyist? 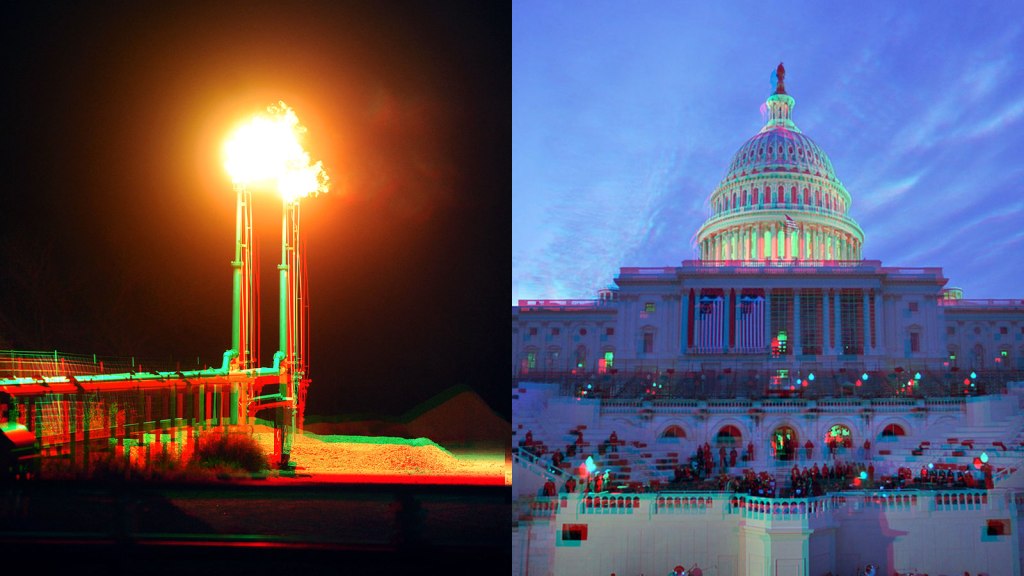 This influential group behind the Halliburton loophole doesn’t lobby. So why did it hire a lobbyist?

The Interstate Oil and Gas Compact Commission can claim some credit for a handful of Big Oil’s biggest regulatory wins.

It helped create an exemption in a bill passed in 2005 that freed fracking from the federal safe drinking water rule, known as the Halliburton loophole. It later co-founded FracFocus, a website for drillers to disclose chemicals used in fracking, the establishment of which the industry then used to argue that EPA oversight was unnecessary. It also worked behind the scenes to get oil and gas waste exempted from a federal environmental law governing hazardous waste.

The IOGCC is a little-known, quasi-governmental group created by Congress in 1935 to “conserve oil and gas by the prevention of physical waste.” Its roster is overwhelmingly made up of industry executives and regulators from oil-and-gas rich states, like Texas and Oklahoma. Over the years, the group has come under fire for representing the views of oil and gas companies. Still, the commission has repeatedly claimed it doesn’t lobby. “IOGCC does not lobby,” a spokesperson for the group told InsideClimate News in 2016. “It does inform and educate state regulators, federal officials, policymakers and the public at large.”

But recent lobbying disclosures filed in the House and Senate show the commission has hired a lobbyist from Capitol Hill Consulting, a Washington, D.C.-based lobbying firm. The disclosures state David Stratton Edwards will lobby lawmakers on the federal hazardous waste law “RCRA,” the “Interior appropriations bill,” as well as “monitor oil & gas policies.”

“The lobbyist apparently was hired for work that could not possibly be called educational,” said Craig Holman, a lobbyist for the watchdog group Public Citizen.

But it’s not clear what Edwards has been hired to do. Staff for lawmakers in the House and Senate natural resources and appropriations committees contacted by Grist hadn’t heard of him. According to his LinkedIn profile, he worked as legislative counsel for Republican Congressman Tom Cole of Oklahoma before joining Capitol Hill Consulting. He “specialized in appropriations,” according to a description of his past work on the website, and also worked at the Department of Interior, Marathon Oil and for the former Republican Representative John Sullivan of Oklahoma.

Holman said it’s possible the reference to the Interior appropriations bill means the commission is trying to secure funding for its work from Congress.

“If they actually are seeking things like earmarks, contracts, or grants, that cannot possibly be called educational in any sense,” said Holman.

“Of course the IOGCC talks to people all the time,” he said. “They’re important coordinators of state policy on oil and gas. But, why are they just disclosing this? It’s possible they’re looking for specific money to fund a specific project, but that doesn’t apply to RCRA [the hazardous waste law].”

Edwards and IOGCC Executive Director Lori Wrotenbery did not respond to multiple requests for comment from Grist.

The IOGCC is one of more than 200 interstate compacts created by Congress to manage issues that cross state boundaries. Many oversee water from river basins, disaster response and efforts to increase educational opportunities for children. In its early history, the commission played an important role in regulating oil and gas prices, functioning much like OPEC ⁠— the cartel of oil exporting countries ⁠— does today. But in the last couple of decades, U.S. oil production has soared and that has made the role of the commission more important, Coleman said.

The commission has long been scrutinized because it straddles the public and private sectors. For instance, it claims to be a governmental entity for lobbying purposes but it’s not subject to Freedom of Information laws that apply to governments. Despite numerous documented instances that show the commission driving federal policy in favor of the oil and gas industry, it says its efforts are “educational” and that as a governmental entity it doesn’t lobby — it communicates with the federal government.

Lobbying disclosures show that the IOGCC has hired a lobbyist at least one other time ⁠— in 2005. Back then, the lobbyist listed “earmarking of funds related to oil production” and “funding for energy education and research” on an appropriations bill that funded the Department of Interior and Department of Energy as issues of interest.

Holman said governmental entities are allowed to contact members of Congress to convey their positions. Still, the Interstate Oil and Gas Compact Commission’s work in the past has gone beyond the scope of communicating state priorities to the federal government, he said.

“Its history shows that it is aggressively pursuing private special interests on behalf of the oil and gas industry,” Holman said. “It should never have received this sort of governmental status.”

In the 1980s, the IOGCC succeeded in pushing to get the oil and gas industry an exemption from the federal waste law, the Resource Conservation and Recovery Act. The loophole allowed the EPA to consider waste from oil and gas fields as “special wastes” that are “non-hazardous.” But the statute also noted that if EPA later determined oil and gas wastes needed to be considered under the Act, it could propose regulations to Congress. In 2016, environmental groups sued to compel the EPA to come up with more stringent standards for oil field wastes. A settlement approved by a district court that year required the agency to review the rules every three years and issue a determination as to whether regulations for oil and gas wastes are necessary.

Emails obtained by Grist show that Wrotenbery, the IOGCC’s executive director, wrote to the EPA in March urging the agency not to issue new regulations increasing oversight of oil and gas waste. “Additional federal regulation is an unnecessary use of federal authorities and resources that is unlikely to solve the particular regulatory issues presented in various oil and gas producing regions,” she said.

Scott Anderson, a member of the IOGCC and senior director for energy at the Environmental Defense Fund, said he wasn’t sure why the commission hired Edwards. But he suggested it might have something to do with that settlement in 2016. “If I had to guess, I would guess that’s the RCRA issue this person is lobbying on,” Anderson said.

Good government advocates have criticized the role that state agencies have played in pushing oil and gas companies’ interests through the commission. Take the industry’s efforts to shift permitting of oil field wastewater in Texas from the EPA to the state’s regulator of oil and gas, the Railroad Commision. Emails obtained by Grist show that last year, John Tintera, president of the Texas Alliance of Energy Producers, an industry association, sent talking points about a federal rule to Lauren Spreen, director of public affairs for Railroad Commissioner Christi Craddick.

“There are several key federal regulations that could be delegated to Texas,” the talking points note.

Dan Tarlock, a professor of law emeritus at the Illinois Institute of Technology, said that oil and gas companies prefer to be regulated by industry-friendly state agencies instead of the often more stringent EPA. Handing regulations to the states often means lax oversight.

Spreen then forwarded the talking points to two employees of the Railroad Commission, including Wrotenbery, who was then the director of the oil and gas division at the agency, to see before a meeting with the IOGCC and the EPA.

“Wanted to make sure you had the attached ahead of the upcoming IOGCC meeting,” Spreen wrote. “I’ve been told they will be pushing the issue.”

In response to a request for comment, an RRC spokesperson, Ramona Nye, said protecting Texans and the environment are the agency’s “highest priorities” and that “RRC rules are in place and enforced to ensure safe, responsible production of our state’s natural resources.”