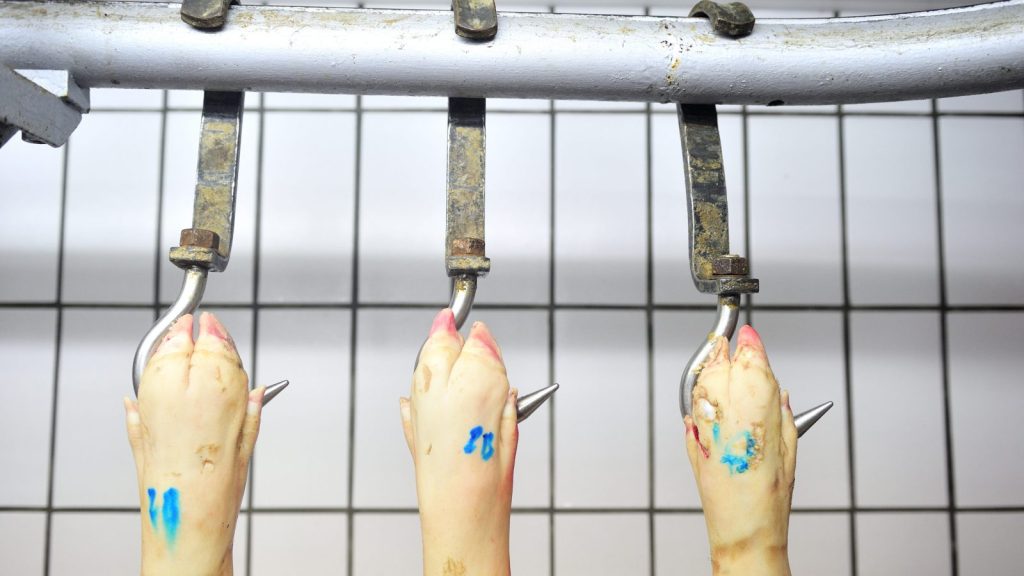 Next time you tuck into a pork chop or a carnitas-filled burrito, spare a thought for the people who work the kill line at hog slaughterhouses. Meatpacking workers incur injury and illness at 2.5 times the national average; and repetitive-motion conditions at a rate nearly seven times as high as that of other private industries. Much has to do with the speed at which they work: Hog carcasses weighing as much as 270 pounds come at workers at an average rate of 977 per hour, or about 16 per minute.

President Donald Trump’s U.S. Department of Agriculture is close to finalizing a plan that would allow those lines to move even faster, reports the Washington Post’s Kimberly Kindy. The USDA’s Food Safety and Inspection Service is currently responsible for overseeing the kill line, making sure that tainted meat doesn’t enter the food supply. The plan would partially privatize federal oversight of pork facilities, cutting the number of federal inspectors by about 40 percent and replacing them with plant employees, Kindy adds. In other words, the task of ensuring the safety of the meat supply will largely shift from people paid by the public to people being paid by the meat industry.

Deregulation is on brand for the Trump team, but the idea of semi-privatizing the USDA’s meat inspection dates to former President Bill Clinton, who launched pilot programs for both chicken and pork plants. President Barack Obama was an enthusiast — his USDA approved a similar plan for chicken slaughterhouses in 2014, but declined in the end to let all poultry companies speed up the kill line after fierce pushback by workplace and food safety advocates. In its waning days in 2016, the Obama USDA was close enough to finalizing hog slaughterhouse deregulation that a bipartisan group of 60 Congress members sent a letter to then-USDA Secretary Tom Vilsack urging the the department not to make the move.

The Trump administration appears to be bringing new zeal to the task of reshaping meat inspection. Once it finalizes the new pork inspection, the USDA plans to roll out a similar scheme for the beef industry, Kindy reports. And last fall, the agency announced it would would let some chicken slaughterhouses speed up their kill lines from 140 birds per minute to 175 birds per minute.

The USDA has long insisted pulling inspectors off the kill line—while also speeding it up—is about “modernization.” “Advances in animal science, market hog production systems, biosecurity, and veterinary medicine have eliminated the vast majority of diseases inspected for under traditional inspection,” the agency claimed in a 2018 explainer.

What does this deregulation mean for the safety of our meat? We already have a sneak preview. For years, a USDA pilot program has allowed five large hog slaughterhouses to operate at higher line speeds with fewer inspectors. A 2013 audit by the USDA’s Office of Inspector General found that the USDA “did not provide adequate oversight” of the pilot facilities over its first 15 years, and as a result, the plants “may have a higher potential for food safety risks.”

According to the OIG report, there are 616 USDA inspected hog plants in the United States, meaning that just 0.8 percent of them are in the pilot program. Yet of the top 10 US hog plants earning the most food safety and animal welfare citations in the period of fiscal years 2008 to 2011, three were enrolled in the pilot program. By far the most-cited slaughterhouse in the United States over that period was a pilot plant — it drew “nearly 50 percent more [citations] than the plant with the next highest number.”

And in 2015, the Government Accountability Project released affidavits from four USDA federal inspectors working in the pilot hog plants. Their reports from the sped-up line, which I wrote about here, don’t make for appetizing reading. Here’s an excerpt.

“Not only are plant supervisors not trained, the employees taking over USDA’s inspection duties have no idea what they are doing. Most of them come into the plant with no knowledge of pathology or the industry in general.”

“Food safety has gone down the drain under HIMP [the acronym for the pilot program]. Even though fecal contamination has increased under the program (though the company does a good job of hiding it), USDA inspectors are encouraged not to stop the line for fecal contamination.”

In Kindy’s recent Washington Post report, Pat Basu, chief veterinarian for the USDA inspection service from 2016 to 2018, makes similar observations. He “refused to sign off on the new pork system because of concerns about safety for both consumers and livestock,” Kindy reports. “The USDA sent the proposed regulations to the Federal Register about a week after Basu left, and they were published less than a month later, according to records and interviews.”

The Trump USDA first announced plans to finalize the new system in February of 2018, but has made no public comments on it since. Kindy reports the changes are imminent, and could be rolled out “as early as May.” The agency did not respond to my request for comment.