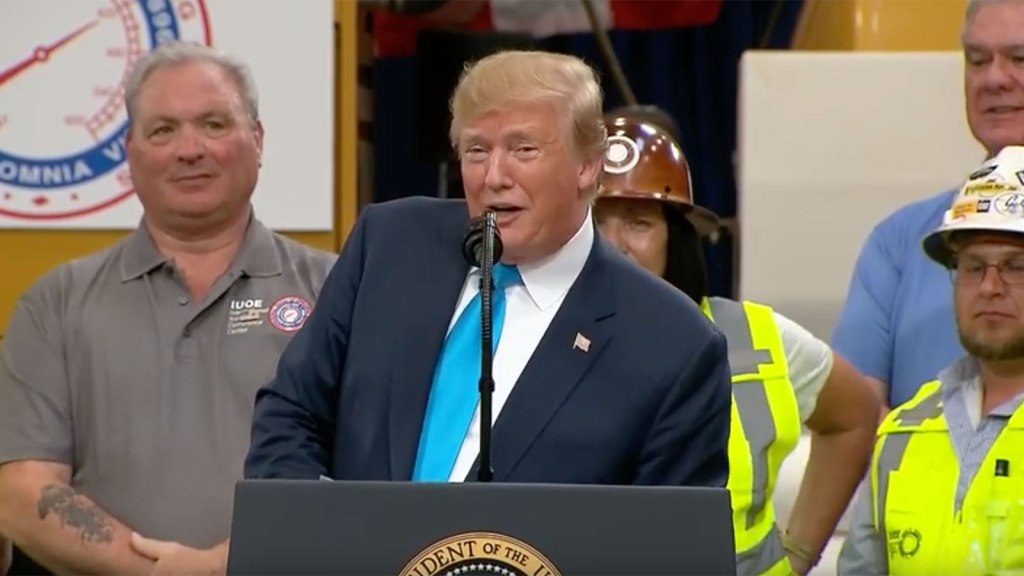 When Donald Trump was campaigning to become president in 2016, he promised to speed up the government review process for “private sector energy infrastructure projects.” On Wednesday, he made good on that pledge by signing two executive orders that would put pipelines on the fast track to success.

In addition to shortening the review process for infrastructure projects, the orders are aimed at limiting states’ power to pause construction and giving the president the final word on permits for cross-border projects, among other things.

“We’re gonna make it easier for you,” Trump said at a press conference on Wednesday. “You know about delays? Where it takes you 20 years to get a permit? Those days are gone.”

To date, oil companies have had a hard time selling their new, big pipeline projects in the court of public opinion. They’ve had an even harder time pushing those projects through the court of … courts. Pipeline company TransCanada, for instance, has been waiting a whole decade to build the northern leg of its Keystone XL extension.

Trump seems willing to go to any lengths necessary to get the job done. Months after a district court judge demanded the government conduct a more thorough environmental review of the potential impacts of the Keystone XL project last November, Trump issued a presidential permit aimed at allowing TransCanada to sidestep the courts.

He announced his new executive orders at an engineer training center in Crosby, Texas, a town near Houston that is still grappling with the fallout from a deadly chemical fire last week. “Smoke from the fires has barely cleared, but President Donald Trump shows no shame in using Texas’ petrochemical corridor as a prop for his misguided and dangerous proposals,” said Stephanie Thomas, an organizer at health and safety group Public Citizen, in a press release.

One of the orders looks to curtail environmental reviews for pipelines nationwide. “It will now take no more than 60 days,” Trump said. “And the president, not the bureaucracy, will have sole authority to make the final decision when we get caught up in problems.”

The other allows the Environmental Protection Agency to limit state powers to pause pipeline construction on the grounds of the Clean Water Act. Previously, regulators in states like New York have halted construction that they argue jeopardizes water resources protected under the act.

“New York is hurting the country because they’re not allowing us to get these pipelines through,” Trump said in the press conference. “They also have a lot of energy under their feet and they refuse to get it,” he said, likely referring to the natural gas trapped in Marcellus shale under the state.

According to the Wall Street Journal, that same executive order also deals with investments, directing the Department of Labor to “scrutinize whether retirement funds that pursue environmental or socially progressive investment strategies are fulfilling their duty to maximize shareholder value.” In other words, Trump is prompting the department to take a magnifying glass to divestment. New York recently moved to divest its multi-billion dollar pension from fossil fuels.

Needless to say, oil and gas companies are pretty enthused about these orders. “Politically-motivated delays and pipeline bottlenecks in the Permian Basin and around the United States are hindering growth, so we appreciate the Administration’s work to bring clarity and certainty to the pipeline construction permitting process,” the Texas Oil and Gas Association said in a press release.

Environment groups? Not so much. “From the Dirty Water Rule to rolling back protections against toxic pollutants from power plants, this is now the next step in the Trump administration’s all-out assault on our clean water,” the League of Conservation Voters said in a statement.