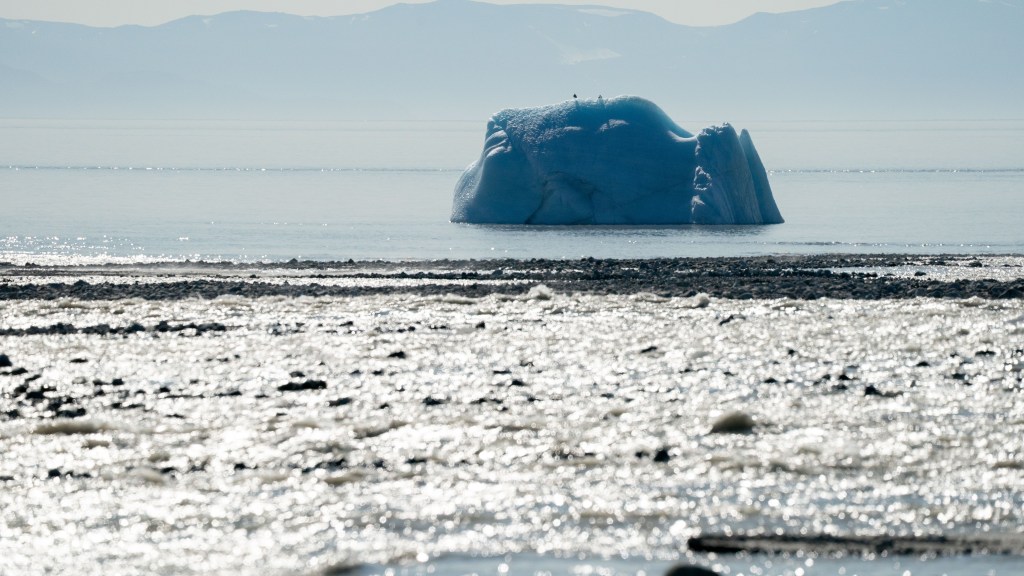 Full-tilt chaos has descended on the Arctic, a region that’s now warming twice as fast as the rest of the planet. This summer it’s been sweltering under unprecedented heat, and wildfires have so far consumed 2.4 million acres in Alaska alone, releasing massive amounts of carbon dioxide. It’s so hot up there that thunderstorms, more often seen in tropical climes, are striking near the North Pole.

Add to this bizarro affair a strange, perhaps counterintuitive finding in the far north of Canada, right next to Greenland. Researchers have found that watersheds fed by melting glaciers are actually soaking up a significant amount of carbon dioxide, in contrast to your typical river, which emits carbon dioxide. On average during the 2015 melting season, per square meter (to be clear, not in total) these glacial rivers consumed twice as much CO2 as the Amazon rainforest. So ironically enough, glaciers melting under the weight of global warming can help sequester carbon, making such watersheds a previously unrecognized CO2 sink.

If you were looking for a way out of our impending climate doom, however, this ain’t it. For one, the sequestering powers of glacial meltwater can’t keep up with our out-of-control emissions, or even other climate change-induced emissions from the Arctic like melting permafrost. And if we keep melting glaciers, we’ll run out of meltwater too. Still, the findings are a key piece in understanding the monumentally complex carbon cycle on this planet.

Glacial rivers are very different from rivers elsewhere in the world. One striking difference is they’re largely abiotic — algae and fish typically don’t colonize them because they’re just too cold. So instead of being chock-full of life, they’re chock-full of sediment.

“As these glaciers are retreating or advancing, which they do every year, they’re actually forming a lot of very fine sediments that are just wide open on the landscape,” says Kyra A. St. Pierre, a biogeochemist at the University of British Columbia and lead author on a new paper describing the findings. Glacial meltwaters pick up this sediment, making them mineral-rich. These rivers of meltwater then gather in mineral-rich glacial lakes.

The thing about carbon dioxide is that it flows freely across the surface of water — the water can both absorb the gas and give it off. In a typical river, organisms are consuming organic material and giving off CO2, or respirating, just like humans do. Thus the river becomes a net carbon producer, because it’s saturated with so much CO2 that the water just can’t dissolve any more CO2 from the air. Same goes for ponds and lakes the world over — they’re greenhouse gas emitters.

Glacial meltwater, on the other hand, doesn’t have this organic respiration, so it can dissolve more CO2 from the air. The sediments that the meltwater picks up along the way in turn consume the CO2 that’s dissolved in the water. “You get the sediments mixing into the water and mixing with the carbon dioxide from the atmosphere that results in a change in the chemistry of the river as it moves downstream,” says St. Pierre. When the sediment reacts with the CO2, some of the material dissolves, so the river itself becomes a meandering carbon sink — to an impressive degree, in fact.

During the relatively low-melt season of 2016, the rivers in this Arctic watershed consumed half as much carbon daily per square meter as the Amazon rainforest. But the year before, which saw three times the glacial melt, on average the rivers consumed twice as much as the Amazon. At one point, they were capturing 40 times as much CO2 as the Amazon per square meter. But again, this is not in total. The Amazon rainforest is 2 million square miles, a span that vastly eclipses the size of this glacial watershed.

Still, what emerges is a hitherto overlooked carbon sink. It’d be exceedingly hard to tell worldwide how much carbon glacial meltwater is capturing, even before climate change began sending Arctic systems into chaos. But the beauty of this work is that it brings some measure of understanding to complex phenomena. “The Arctic is changing much faster than even our best models predicted,” says Rose Cory, a biogeochemist at the University of Michigan, who wasn’t involved in this work. “And so to be able to model or project forward what’s happening, we have to have this process information.”

Researchers have to better understand how rapidly melting glaciers impact freshwater systems. And also how much CO2 these meltwaters might capture, so scientists can build more robust carbon budgets, or estimate how much carbon we can pump into the atmosphere if we want to meet the goals of the Paris Agreement. “I think this study is a really great example of the work that’s needed,” Cory adds.

To be clear, this study hasn’t found humanity’s geochemical savior in glacial meltwater. These rivers and lakes are sucking up CO2, yes. “But at the same time you also have these other changes in the high and low Arctic that are going to dominate the CO2 release from warming,” says Cory. “For example the thawing of permafrost is going to release carbon dioxide, and that cannot be offset by what’s happening in these glacial lakes.”

Still, a carbon sink is a carbon sink, and a better understanding of these complex processes brings an increasingly chaotic carbon cycle into greater focus.