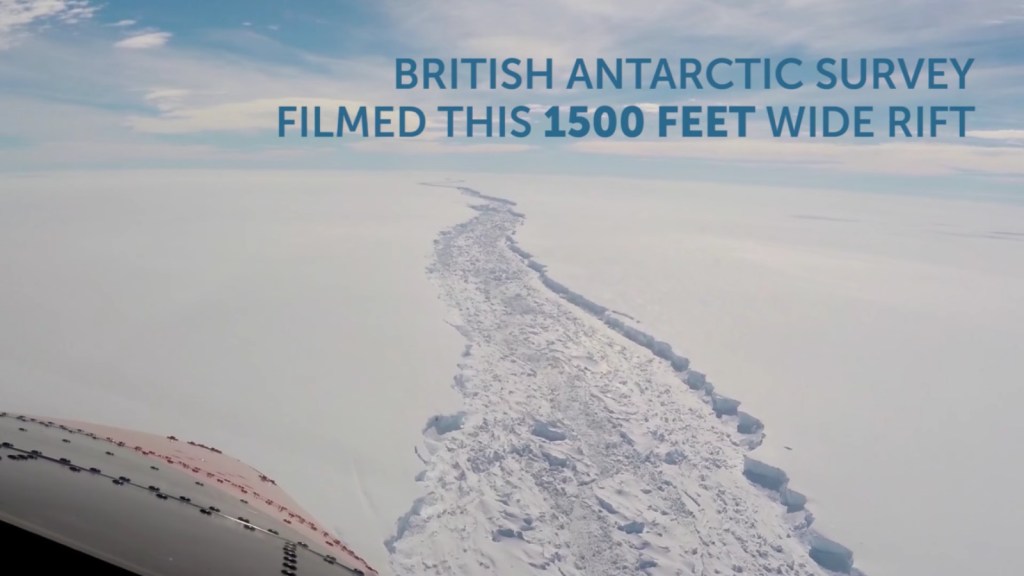 It’s summer in Antarctica, which has scientists scurrying around the seventh continent carrying out various research experiments. That includes monitoring the massive crack that has spread across the Larsen C ice shelf, located on the Antarctic Peninsula.

On Tuesday, researchers with the British Antarctic Survey released new aerial footage showing the widening rift that threatens to tear the ice shelf asunder at any moment. The footage makes the immensity of the crack clear, as the yawning chasm stretches off into the horizon.

The crack now stretches more than 100 miles in length. And at 1,500 feet across, you could lay the Empire State Building across the rift with a few feet to spare.

The rift is expected to soon cleave a monster iceberg off the Larsen C ice shelf. Scientists estimate the iceberg could be up to 1,930 square miles in size, or roughly 10 percent of the whole ice shelf. That’s the equivalent of Delaware (or twice the size of Wales if you prefer Commonwealth measurements).

Scientists at Project MIDAS, an Antarctic research group monitoring the rift, wrote in January that the breakup “will fundamentally change the landscape of the Antarctic Peninsula” and leave the ice shelf in a less stable state.

That could eventually cause it to collapse, a fate that befell the Larsen A and B ice shelves in 1995 and 2002, respectively. The Project MIDAS scientists wrote that the Larsen B breakup followed a similar massive iceberg calving event, which was caused by abnormally warm air in one of the world’s fastest warming places.

Ice shelf health is a key metric researchers are watching all around Antarctica. The shelves act like bookends, holding up the massive stores of ice on the continent. If they disappear, it will cause more land ice to tumble into the ocean, raising sea levels. Since Larsen B’s collapse, the glaciers behind it have flowed to the sea six times faster.

The West Antarctic has some shelves very vulnerable to breakup, including the Pine Island Glacier ice shelf. It recently calved a comparatively small “aftershock” iceberg following a major July 2015 calving event. But satellites show that it has started to develop a large crack as well.

Previous research has shown that an unstoppable melt that would drive oceans at least 10 feet higher could already be underway in West Antarctica, though it would take centuries for the process to play out. Warming oceans and air are the main culprits.

Even East Antarctica, which is colder and thus considered to be more stable, has started to concern scientists. Research published late last year chronicled a massive meltwater lake inside the Roi Baudouin ice shelf due to warm winds blowing down from the ice sheet.

In a separate study, scientists also found that the Totten ice shelf is being eaten away from below by warm ocean waters.

The Larsen C is certainly the most striking example of the rapidly changing Antarctic, but rising temperatures will all but ensure it won’t be the last.