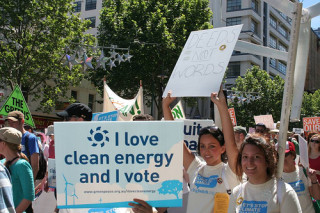 In a groundbreaking agreement announced earlier this year, the gas utility serving Minneapolis, MN – CenterPoint Energy – will work with the city of Minneapolis to achieve a 30% reduction in greenhouse gas emissions by 2025.  The agreement, negotiated with the grassroots campaign Minneapolis Energy Options, secures the support of the gas utility for a variety of measures intended to advance clean, affordable, and local energy.

The memorandum of understanding, signed ahead of the city’s franchise contract renegotiations with CenterPoint next year, includes efforts to maximize the impact of the utility’s state-mandated conservation program, track building energy use and methane leakage, cultivate renewable heat technologies, and improve equity in training and hiring.

“It’s a watershed moment for natural gas utilities and for cities,” remarked John Farrell, director of the Institute for Local Self-Reliance’s Democratic Energy program and chair of the Minneapolis Energy Options steering committee.   “It’s a model for cities across U.S. to take charge of their energy future, and it was only possible with a committed grassroots campaign.”

For the past year, Minneapolis Energy Options has been pressuring the city council to put municipalization of gas and electric utilities on the ballot in the fall of 2013.  Already the campaign’s efforts goaded the city to finance a $250,000 Energy Pathways Study, meant to explore the strategies for meeting the city’s climate, renewable energy, and economic goals, up to and including municipally owned utilities.

With the signed memo with CenterPoint, pressure falls on the city’s electric utility – Xcel Energy – to step up.  Xcel has already suffered a defeat at the polls in Boulder, CO, in 2011 to take a municipal grid public, largely because of its failure to make a similar commitment to local renewable energy generation and conservation.  Xcel authored a weak letter to the city in August, promising to do for the city largely what it is required to do under Minnesota state law, and nothing more.  It generated a suitably skeptical reply from the mayor).  See this essay for more on what’s at stake and what’s possible.

CenterPoint Energy has begun to address the city’s climate challenge.  It remains to be seen if the utility that calls Minneapolis its headquarters will show a similar commitment to a local, clean energy future for Minneapolis.