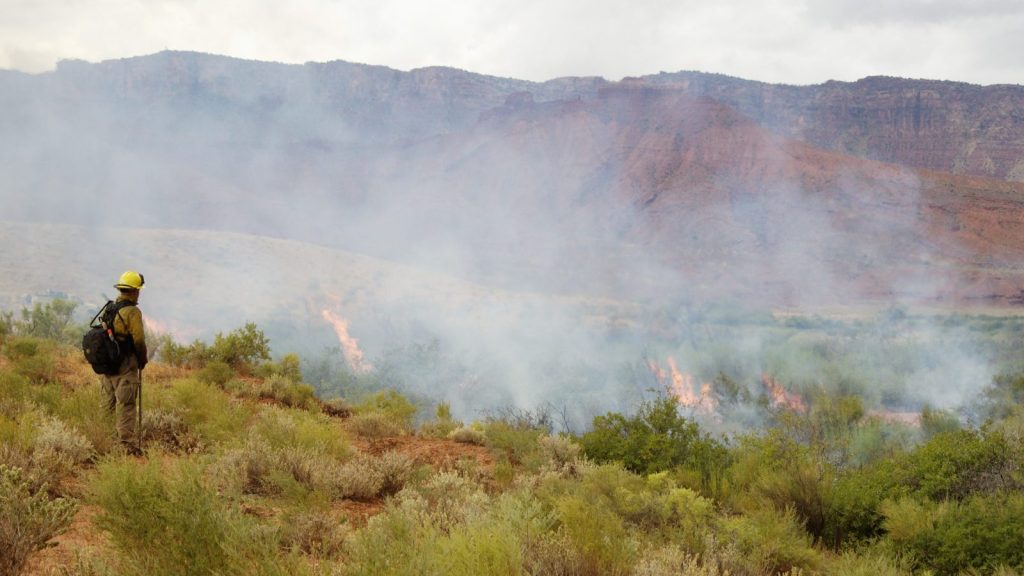 Between the town of Elko, Nevada, and the Idaho border stretches some of the most remote land in the Lower 48, rolling hills and arid basins as far as the eye can see. Last July, this section of the Owyhee Desert was scorched by a fierce, fast-moving blaze with 40-foot flames, the largest wildfire in state history. In the end, the Martin Fire burned 435,000 acres, including some of the West’s finest sagebrush habitat. Now, the raw range wind whips up the bare earth into enormous black clouds that roil on the horizon.

Once rare, fires that large, hot, and destructive are now common in the Great Basin, a 200,000-square-mile region of mountains and valleys that includes all of Nevada and much of Utah, as well as parts of California, Idaho, and Oregon. But despite the rising fire risk, a general lack of attention is putting the rangeland in growing danger.

The fire problem “risks permanent loss” of the ecosystem, according to Jolie Pollet, a fire ecologist and the Bureau of Land Management’s division chief for fire planning and fuels management. This is a genuine crisis, she said, and it demands greater urgency and attention than it is currently getting.

“The general public, especially urban areas, doesn’t seem to have an appreciation for the impacts on these landscapes, since the areas are so sparsely populated,” she said.

The new ferocity of rangeland fires has an old culprit: cheatgrass, an annual originally from Eurasia that was brought to this country in cattle feed, packing material, and ships’ ballast in the late 1800s. It has since proliferated through overgrazing and development. The grass burns easily and often, and it thrives on fire. In intense blazes, when native shrubs perish, cheatgrass simply drops its seeds and then expands into the burned areas. The areas of greatest fire risk in the Great Basin have a high correlation with the areas of highest cheatgrass incursion, and the increasingly dry and arid climate brought by climate change is encouraging its spread. The Great Basin now has the nation’s highest wildfire risk.

Historically, sagebrush habitat burned about once every century or less, but now it happens around every five to 10 years. Over the past two decades, more than 15 million acres of sagebrush have been permanently lost to fire, according to the BLM, 9 million of them since 2014. Overall, since 2000, more acres of shrubland or grasssland have burned than forest.

If sagebrush decline continues, the approximately 350 species that depend on it are in serious trouble. The Martin Fire burned some of the best sage grouse habitat in the country and destroyed more than 35 grouse mating grounds, or leks. The fires also harm watersheds, cause erosion and destroy wildlife corridors used by pronghorn antelope, mule deer, and elk.

The impact on rural Americans is equally severe. Counties and ranchers must deal with infrastructure loss, including troughs, fencing, and damage to roads and powerlines. Many ranchers struggle with the additional costs, said Ron Cerri, a rancher and commissioner in agriculture-dependent Humboldt County, where the Martin Fire burned. Ranchers may lose hayfields in a blaze, for example, and six months of hay for 500 cattle costs about $216,000, according to Cerri. Cattle often die in the flames, and ranchers have to put down animals crippled by the smoke. Jon Griggs, a Nevada rancher whose land burned in 2007, called it the worst part of the job.

Because sagebrush ecosystems are neglected, they get less funding, making the fire threat even worse. Indeed, the BLM receives even less money than the already-underfunded Forest Service. For 2019, the Forest Service got about $400 million in annual funding for fuel management, and about $1.3 billion for firefighting preparedness. The BLM received $85 million and $180 million respectively, even though it manages about 50 million more acres of public land. The BLM also received $11 million for fire recovery, a microscopic amount given the scale of the problem.

When the BLM runs out of firefighting money it’s forced to raid other programs, as the blazes quickly burn through agency budgets.

“The agencies run out of money and all the other programs get gutted,” said University of Montana wildlife biology professor Dave Naugle. “In the long term, it really hurts conservation.”

Last year, Congress passed a measure that allows the BLM to access emergency fire funds without draining other initiatives. But the provision doesn’t kick in until next year, and even when it does, the BLM will remain seriously underfunded for firefighting, prevention, and restoration.

Meanwhile, wildfires are already burning across the West, and the cheatgrass is beginning to dry up, turning from its spring purple to the yellowish hue that signals its readiness to burn.