What drought? These states are gearing up to draw more water from the Colorado. 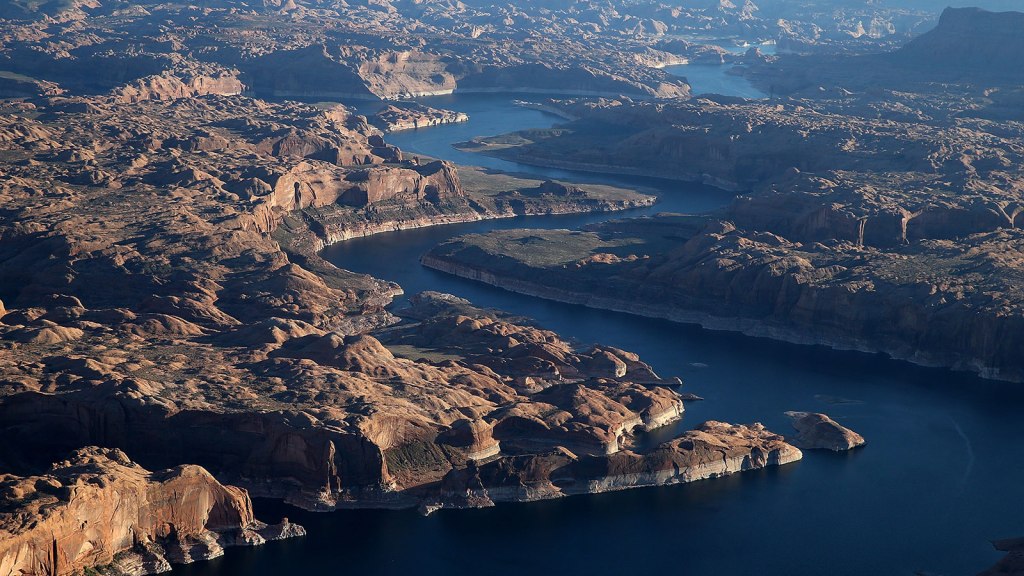 What drought? These states are gearing up to draw more water from the Colorado.

Wyoming wants to modify the Fontenelle Dam so it can use an extra 80,000 acre-feet of water from a tributary of the once-mighty Colorado River. At its headwaters, Denver Water hopes to expand a reservoir’s capacity by 77,000 acre-feet of water. And several hundred miles south, Utah is trying to build a pipeline that can funnel another 86,000 acre-feet out of the river.

There are at least six high-profile projects in Utah, Colorado, and Wyoming that combined could divert more than 300,000 acre-feet of water from the beleaguered Colorado River. That’s the equivalent of Nevada’s entire allocation from the river. (One acre-foot is roughly equal to 326,000 gallons.) These projects are in different stages of permitting and funding, but are moving ahead even as headlines about the river’s dwindling supply dominate the news.

The Colorado River sustains the American West. About 40 million people rely on the Colorado River and its water irrigates 5.5 million acres of farmland — an area roughly the size of the state of New Hampshire. But the river has long been in a state of decline and it no longer reaches its delta in Baja, Mexico, without human intervention. A confluence of factors — including booming populations in Western cities, a historical undercount of the amount of water in the river, and prolonged drought fueled by climate change — have contributed to its current state.

For the last few years, Arizona, California, Nevada, New Mexico, Colorado, Utah, and Wyoming have been working on an agreement to prevent levels at key reservoirs from dropping below a critical threshold. After a few roadblocks that seemed set to derail the plan, the seven states — which had historically been litigious over water — came to an agreement in March. It was heralded as a historic deal. Earlier this week, President Trump signed legislation approving the plan.

But now, at least three of those states are forging ahead with building up infrastructure to sip even more of the Colorado’s water.

Gary Wockner, director of the environmental group Save the Colorado, pointed out the lopsided water conservation efforts. “They’re trying to drain more water with massive dams, diversions, and pipelines,” he said. “It’s a kind of political chaos that defies common sense.”

Lawyers and environmentalists say the seemingly mismatched priorities stem from interstate politics and the laws that govern states’ water allotment from the Colorado River.

The 1922 Colorado River Compact divided the seven states into upper and lower basins. The headwaters of the river and the main source of water lie in the upper basin, which includes Wyoming, Colorado, Utah, and New Mexico. The lower basin, where much of the water is used, includes Nevada, California, and Arizona. Water was divided equally between the upper and lower basin despite the disparity in where the water originates and where it is used.

The upper basin has never used its full allotment of water. It’s legally entitled to 7.5 million acre-feet, but has only been using about 4.5 million. With smaller populations and less agriculture, the upper basin states just don’t have the demand for the water. As a result, lower basin states such as California and Arizona have benefitted from the “bonus water” that upper basin states have left in the river.

The new drought contingency plan recognizes the difference in water use among the states.

While the lower basin states have agreed to cut between 400,000 and 600,000 acre-feet of water depending on how low water levels get at Lake Mead — which sits on Nevada’s border with Arizona — the upper basin has made no such promise. Instead, if water levels get too low, the upper basin states will compensate farmers, municipalities, and other water users that volunteer to conserve water and bank it in Lake Powell, along the Utah-Arizona border.

“The upper basin is going to an all-you-can-eat buffet and the lower basin is going on a diet,” said Zachary Frankel, executive director of Utah Rivers Council. “It’s just a cognitive dissonance.”

Frankel and other environmental advocates say that with shortages on the horizon, the upper basin states are rushing to develop as much water as quickly as possible. Amelia Nuding, a senior water resources analyst at Western Resource Advocates, compared the situation to the frenzy before a hurricane.

“Everyone runs to the supermarket and grabs as much water and food and supplies as they can,” Nuding said. “It’s a little bit like that. People know that there’s not a whole lot left to tap, and they want to get as much as they can now.”

Take Utah’s Lake Powell Pipeline. The state wants to build a 140-mile pipeline from the reservoir, which is currently near historic lows, to Washington and Kane counties in southwest Utah. The state claims the project is necessary because Washington County’s population is expected to more than triple by 2065.

Washington County uses more than double the amount of water per capita of other desert cities such as Tucson and Boulder, according to a report authored by Nuding. The pipeline is estimated to cost between $1.1 and $1.8 billion, but Nuding says conservation measures, water reuse and securing water rights from agricultural users could be implemented to save the same amount of water the pipeline would transport for a third of that cost.

Utah has the legal right to draw more water from the river. It is allowed to use 1.7 million acre-feet every year, but only draws about a million. That has led some lawmakers to complain. Last year, Senator Mitt Romney said that “if we don’t take our full share from the Colorado River it ends up going to California and they take our share.”

In some cases, momentum for diversion projects has been developing for a long time. In Colorado, plans to expand Gross Reservoir — an hour northwest of Denver — so it can hold an additional 77,000 acre-feet have been in various stages of federal and state permitting for the last 16 years.

As for the timing of the expansion project, Denver Water spokesperson Todd Hartman said the two basins are just not facing the same realities. The more water-rich upper basin “is operating in a different scenario,” he said.

There’s also an overarching water philosophy at play here. Much of Western water law follows a “use it or lose it” principle, where users can lose the right to water that isn’t being put to use. While that doesn’t apply to states’ water rights, there are worries about losing water to more economically and politically powerful states like California. “It’s kind of a poker game,” Frankel said. “It’s less about legality and more about politics.”

In Wyoming, for instance, Governor Matt Mead developed a 10-year plan to build 10 reservoirs that can store more water instead of allowing it to flow downstream. Expanding the Fontenelle Dam in western Wyoming so the state can access an additional 80,000 acre-feet was part of the plan. It received congressional approval last year.

When Mead’s plan was first announced in 2015, Wyoming’s top water engineer, Pat Tyrrell told Wyoming Public Media that he agreed building dams during a drought was counterintuitive. “It’s interesting these days,” he said. “It’s easy to be schizophrenic in the Colorado River Basin.”