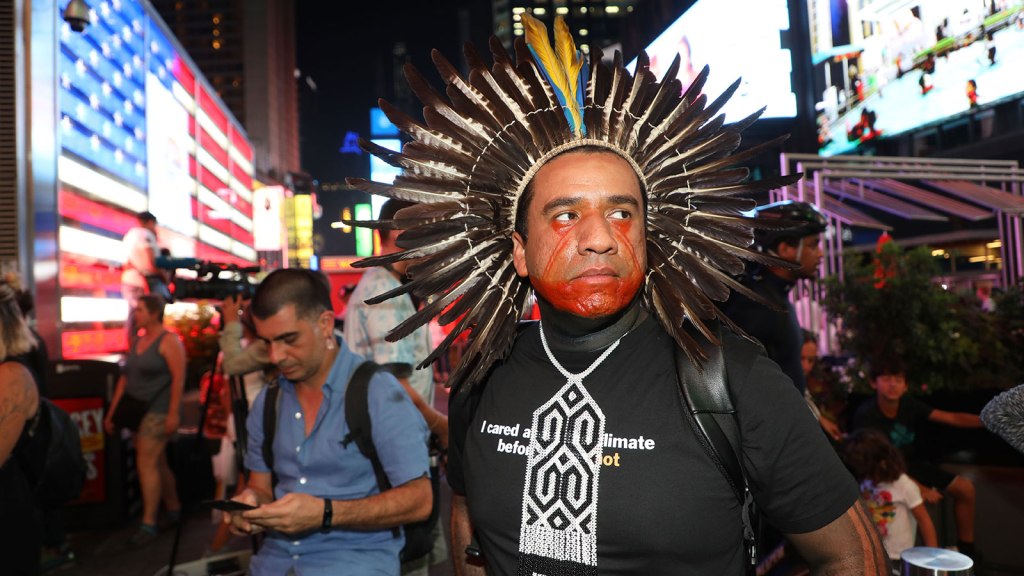 Jair Bolsonaro went full nationalist at the green-marbled General Assembly Hall of the United Nations on Tuesday. The far-right Brazilian president blamed international media and environmental organizations for spreading “lies” about the fires in the Amazon rainforest, contradicting data from his own government, and insisted that his anti-indigenous policies are meant to secure the well-being of all Brazilians.

“We reject the attempts to exploit and use the environmental agenda and indigenous policy agenda to further the economic interests of foreign countries,” Bolsonaro told world leaders.

For indigenous land protectors, hearing Bolsonaro’s rhetoric on one of the world’s biggest stages was just another reason to be fearful. “Bolsonaro’s speech caused us one more day of panic and horror,” Dinamam Tuxá, an indigenous lawyer and coordinator of Brazil’s Indigenous People Articulation, a coalition of indigenous communities in Brazil, told Grist. “It was with this sort of narrative that the conflict and violence within indigenous territory have started to rise.”

Indeed, the number of invasions of indigenous lands by miners, loggers, and other parties interested in extracting natural resources has jumped in the first nine months of President Jair Bolsonaro’s administration. The far-right president has often complained that indigenous land covers too much of Brazil and pledged to open them up for exploitation. Tuxá says this rhetoric encourages invaders.

“Everything he talked about at the U.N. is a reflection of the policies that he’s implementing against indigenous people, against our lands, against our rights,” Tuxá added. Tuxá and other Brazilian indigenous leaders were in New York to attend the U.N. Climate Action Summit on Monday.

The president of Brazil also used his address at the United Nations to personally take aim at Brazilian indigenous leader Raoni Metuktire of the Kayapó tribe, accusing him of being a tool of foreign governments. He added that NGOs “insist on treating and keeping our Indians as true cavemen.” On Monday, Chief Raoni told reporters at the U.N. that Bolsonaro’s onslaught on the Amazon “is not just bad for us indigenous people, it is a disaster for all humanity.”

Bolsonaro’s speech comes just days after the Brazilian president drew criticism for recruiting a rare pro-Bolsonaro indigenous voice, Ysani Kalapalo, to travel with him to New York for the United Nations General Assembly. In a strongly-worded open letter, 16 indigenous leaders from Brazil’s Xingu indigenous territory slammed Bolsonaro’s “colonialist and ethnocidal policy.” “Not content with attacks on indigenous peoples, the Brazilian government now wants to legitimize its anti-indigenous policy by using an indigenous figure sympathetic to its radical ideologies,” the chiefs wrote.

After Bolsonaro’s out-of-touch and unhinged rant in front of world leaders Tuesday, Tuxá hopes the international community actually takes action to help protect indigenous communities and their land in Brazil. The Indigenous People Articulation has previously called for international sanctions against Brazil, and on Tuesday Tuxá again asked global leaders to do something. “The United Nations is the global entity that’s meant to support us in battling to protect the environment and should do a lot more to get everybody together and take action,” he said.