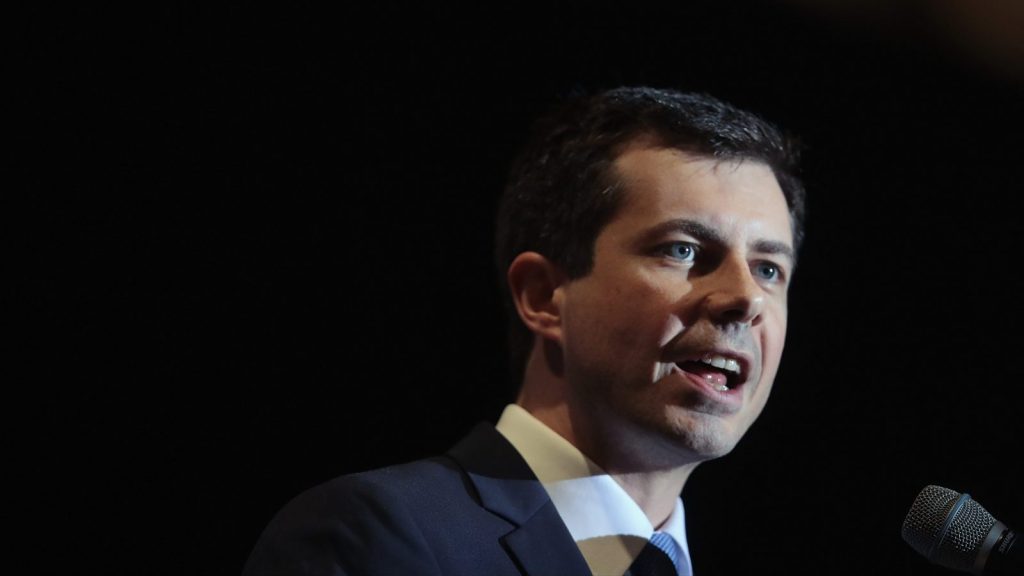 More than 1,000 people crowded into the Showbox, a music venue in downtown Seattle, on Tuesday afternoon to witness Pete Buttigieg make an appearance in the Emerald City. The presidential candidate was running more than 45 minutes late and was just beginning to lose his audience — “I’m starting not to love Pete so much,” someone remarked — when he took the stage.

The mayor of South Bend, Indiana, has risen swiftly in the polls and managed to outraise the rest of the Democratic field this quarter. Buttigieg has credited climate change for inspiring him to jump into the presidential race. “One of the reasons I’m running for president is because America is running out of time,” he said on Tuesday, framing the issue as a national security threat: “If we’re gonna get real about national security, the time has come to treat climate disruption as the threat that it is.”

But Buttigieg hasn’t yet released a climate plan on par with those proposed by some of his rivals, including Washington Governor Jay Inslee, who aims to mobilize $9 trillion to combat the crisis and has based his entire presidential bid on the issue. Senator Elizabeth Warren, former Texas Representative Beto O’Rourke, and even Joe Biden, the candidate-to-beat according to most polls, have proposed sweeping climate plans with trillions of dollars at play.

Mayor Pete has released one climate-related policy proposal so far, a climate corps — similar to AmeriCorps — that would put thousands of Americans to work on climate resilience and conservation endeavors. “We do better when we have a project,” he said of his proposal at the Seattle event. But where does Buttigieg stand when it comes to implementing an economy-wide plan?

Buttigieg’s answer to a question from the crowd shed light on what his climate plan could look like when (or if) he releases one.

First: A carbon tax and dividend. “This is not about taking money out of the economy,” he said. “I propose that we rebate that money right back out to the American people and we do it progressively.”

His pitch sounds like a revenue-neutral carbon tax, a fee on pollution that gets returned to taxpayers every year instead of going toward a climate resiliency fund or a green project. We’ll have to wait for his actual plan to figure out what he means when he says he wants to do it “progressively.” It’s an idea that has failed at the ballot-box twice in Washington state, but a couple of other candidates, including Inslee and Cory Booker, have also championed some kind of carbon tax.

Next, “massively increase the amount of federal R&D that goes into not just renewable energy but also energy storage and carbon storage,” he said, adding that this investment should be on par with the moon landing or the Manhattan Project. Every candidate with a climate plan so far has vowed to dedicate major resources to green research and development. Buttigieg said he wants to quadruple federal funding for R&D.

Then, rejoin the Paris Agreement — something that all the Democrats running for president have said they’ll do — and host a stateside Pittsburgh Summit for mayors who are championing green policies and targets in their cities. “A lot of the answers are coming from the communities,” he said.

Finally, Buttigieg emphasized the role rural America can play in mitigating the crisis. “Every part of the American spectrum needs to be a part of the solution; it’s not just cities,” he said.

Buttigieg said earlier in the night that science sets the timeline for climate action, not politics. But even if he took the White House in 2020, a carbon tax, some more federal investment in R&D, a national service corps, and yet another climate summit probably won’t put the United States on the path to decarbonization at the pace that science demands. At any rate, it still doesn’t have the same meat as the trillions promised and plans proposed by other candidates.

Nevertheless, some audience members were impressed by Buttigieg’s vision of a green America. Nancy Lauterbach, a 57-year-old real estate agent, said Buttigieg is “savvy enough to put the R&D that is needed into climate change.” Ken Miller, a 71-year-old who owns a construction business, liked the mayor’s authenticity. “I thought his point that the timeline is set by science, not by politics, was compelling,” Miller said. “As well as the fact that we as a country need a project, and climate change is as good a one as we’ll ever have.”