For decades, California Assemblywoman Cristina Garcia has been trying to clean up the air in polluted neighborhoods — first as an activist, then as a legislator. Recently, she celebrated her most significant victory: Governor Jerry Brown needed her help to extend California’s cap-and-trade program. In return for her support, she got the legislature to pay attention to not just greenhouse gases, but all the accompanying nasty that pours out of smokestacks. The result: California’s most significant air-pollution law in years.

On Wednesday, Brown signed that bill, AB 617, on the blacktop of the Neighborhood Youth Center in Bell Gardens, California — Garcia’s home district in southeast Los Angeles. On the other side of a peach-colored, steel fence, a group of activists chanted protests. They were advocates for exactly the issues Garcia has championed. And they were heckling her.

Environmental justice groups have expressed outrage at the passage of California’s new cap-and-trade law, AB 398, which they say concedes too much to industry. A few even opposed Garcia’s air-pollution bill, claiming it isn’t strong enough to spur change.

Garcia tried to be a good sport. She went around to the activists’ side of the fence — the side she was once on — and got a picture of herself holding one of their signs. “I just have to understand where they are coming from and their frustrations and their skepticism,” she says. “We haven’t gotten anything, so why should they expect this is any different?”

But she was also frustrated. Activists have been fighting to raise fines on polluters since 1975. Five times, politicians have introduced bills to levy higher penalties; five times, they have failed. Now, with AB 617, Garcia has managed what once seemed impossible — and created a set of new legal tools for tackling all manner of air pollution, to boot. Yet, due to their frustration with cap and trade, some activists were treating her legislation like a step backward. 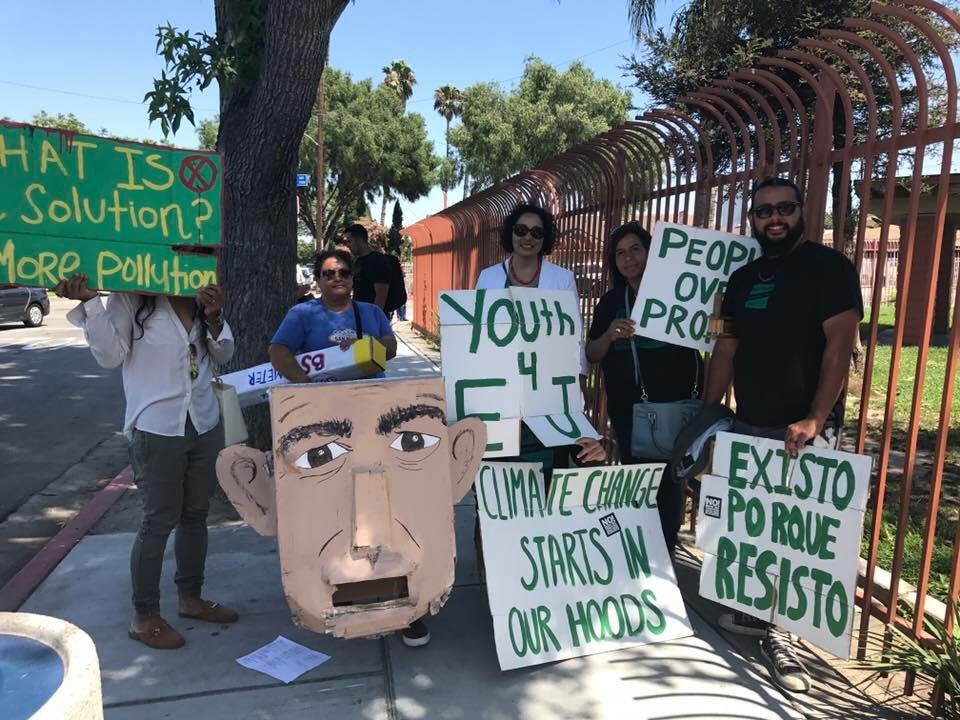 Cap and trade sets a limit on greenhouse gases (the cap) and lets businesses figure out who gets to emit those gases by buying and selling emissions credits (the trade). California has had a cap-and-trade program for the last five years, but business was challenging it in court. The new version is more industry-friendly — and because it passed with a supermajority, it is nearly lawsuit-proof.

Garcia’s companion bill, AB 617, allows for the creation of regulatory plans that focus on pollution hotspots — neighborhoods that suffer the brunt of emissions — the very communities environmental-justice advocates work to protect.

“It’s laudable that lawmakers have recognized that low-income communities and communities of color are disproportionately burdened by pollution,” says Lara Cushing, a researcher at the University of California, Berkeley.

At the same time, Cushing explains, the cap-and-trade bill misses important opportunities: First, it prevents regulators from restricting the carbon emissions from any one plant. And it allows for industries to offset their emissions by, for example, planting trees hundreds of miles away. That doesn’t help people in the communities around industrial polluters, and there are real questions as to how well offsets work at all.

Cushing coauthored a recent assessment of California’s current cap-and-trade scheme, which found that the state’s highest emitters were polluting more after the system was put in place than before. Those facilities — which were overwhelmingly located in low-income communities and areas populated by people of color — sometimes paid for their emissions by buying offsets for projects beyond the state’s borders. (Grist board member Rachel Morello-Frosch was a coauthor on that report.)

According to Strela Cervas, codirector of the California Environmental Justice Alliance, the new pair of laws “lacks teeth.” In fact, she wrote in a statement, the state appears focused “on making it as cheap as possible for industry to comply.”

She’s got a point: Governor Brown brought the Chamber of Commerce and some Republicans on board by structuring the policy so it would drive as little industry out of state as possible.

For Alvaro Sanchez, environmental equity director at the Greenlining Institute, AB 617 offers “a mixed bag” for communities hoping it’ll improve the state’s cap-and-trade system. On the one hand, it mandates air-quality monitoring, increase penalties, and encourage upgrades to facilities. But Sanchez laments the fact that it doesn’t set a timeline for the implementation of changes that could reduce emissions.

“It just says you have to develop a plan,” he says. “A plan without implementation is just nothing, really.”

David Pettit, a senior attorney for the Natural Resources Defense Council — which supported the bills — wishes the laws gave him more power to go after polluters. “Deals were made in the legislature, and this is the result,” he says. “It’s not perfect but it’s way better than what we had the day before the governor signed it.”

“When this discussion started we were only talking about curbing carbon,” she explains. “Now we’re talking about curtailing all the the other toxins that are coming out of our smokestacks and our tailpipes: nitrogen oxides, sulfur oxides, lead, chromium, arsenic.”

Now the real work begins: And it’s likely that Garcia, environmental-justice activists, and mainstream environmental groups like the NRDC will be reunited in the fight to forcefully implement these laws.

Ultimately, the fact that grassroots organizations are haranguing an environmental-justice champion is a sign that the movement is making progress. For years, the environmental concerns of the poor have been utterly ignored. Now, lawmakers like Garcia are starting to address some of those concerns. They are doing it in the usual way, by horse trading and making tough compromises. And now, as usual, the activists are attacking.

That’s politics — if you aren’t being pilloried, it’s a sign you aren’t getting anything done.

“I hope to prove to the public that something good will come out of this,” Garcia said. “I am going to keep fighting, and this is not going to be the only part of my legacy on clean air.”